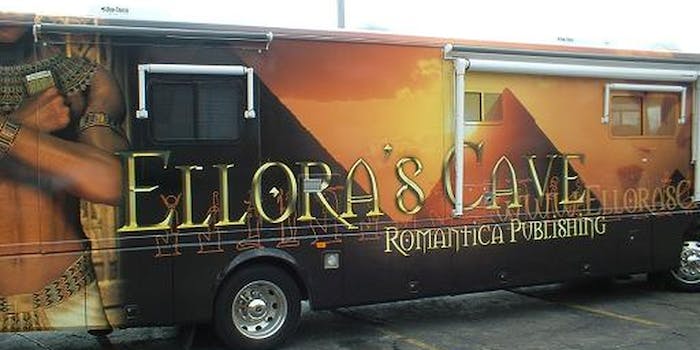 The publishing community is frothing over the legal standoff between erotica publisher Ellora's Cave and the blog Dear Author.

A major erotica publisher is suing a beloved one-woman blog site, and everyone from the blog’s readers to the publisher’s authors are rallying in support of the blogger.

The publishing community has done everything but hold a bake sale to help blog owner Jennifer Gerrish-Lampe, better known as Jane Litte of Dear Author, raise the money for her legal defense fund against Ellora’s Cave, the erotica publisher suing her for defamation.

Ellora’s Cave, whose storehouse of popular romance titles raked in $15 million last year, is demanding $25,000 in damages from Gerrish-Lampe after she blogged about the company’s allegedly questionable business practices.

But Gerrish-Lampe won’t be fighting the suit alone: A crowdfunding campaign to defray her legal costs created by well-known book blogger Sarah Wendell of Smart Bitches, Trashy Books has raised more than $50,000 in five days. It’s also given rise to a hashtag, spawned a charity erotica anthology, and created a strange backlash for the long list of authors who have supported the blog.

Before Fifty Shades of Grey made erotica a household word, small presses at the margins of the publishing industry spent most of the 2000s cultivating a steady and growing demand for racier titles. Among the earliest and most successful of these independent publishers was Ellora’s Cave, a longstanding staple of the genre with deep reader loyalty and sales to die for. In 2012, the company reported it sold 200,000 books a month.

But behind that booming trail of success, public records and statements from authors paint a very different picture: a history of what some have alleged is managerial neglect and a lack of accountability from Ellora’s Cave’s founder Tina Engler, better known by her pseudonym, Jaid Black.

In August, one of Ellora’s authors anonymously posted an internal message from the company’s CEO Patty Marks citing a “quick, sharp decline” in Amazon sales and encouraging authors to promote their books sold directly from Ellora’s website. The news, combined with other factors like a company warehouse sale and readers complaining about high prices from the publisher raised red flags among industry watchers. On Sept. 10 and 11, Ellora’s Cave authors Avril Lashton and Cat Grant both alleged on their blogs that Ellora’s Cave had delayed or not paid them royalties.

Enter Dear Author. Dear Author is a popular publishing industry blog that has built its reputation on analyzing industry news, debunking rumors, and serving as an information resource for authors and readers. Following Ellora’s sales drop, Gerrish-Lampe, who is a lawyer by day, dug deeper into Ellora’s Cave and its financial records.

On Sept. 14, she compiled a long litany of alleged evidence that Elllora’s is on its last financial leg, including claims from authors that they had not received royalties, financial records showing years of unpaid taxes, and erratic behavior from Engler who was taken to task by a judge for “systematic delays and flagrant disrespect for the court” in a 2008 civil court case.

Ellora’s Cave fought back. On Sept. 26, the company filed a defamation suit against Gerrish-Lampe and Dear Author, along with a temporary injunction to remove the blog post. It also seeks to induce Gerrish-Lampe to “disclose the names of the anonymous commenters on the blog so that the spreading of the defamatory statement can be stopped.”

The hearing on the injunction was inconclusive, so both parties are going to court. Dear Author’s Attorney Marc John Randazza told the Daily Dot via email that the lawsuit was an intimidation tactic:

Clearly the plaintiff has never read Near v. Minnesota [a legal precedent in favor of allowing negative press to be published] or seen The Big Lebowski. As Walter Sobchak taught us, “the Supreme Court has roundly rejected prior restraint.”

This is clearly a SLAPP suit. Ellora’s has filed a lawsuit without any possible damages. The only thing they seem to want to accomplish is inflicting attorney’s fees on the defendant.

Speaking to the Dot by phone, Ellora’s lawyer Steven Mastrantonio insisted that it isn’t a SLAPP, or strategic lawsuit against public participation, suit, and said that although they “would love to resolve the lawsuit,” it was important to clear the air about the false claims made against the company. A SLAPP suit is intended to essentially silence critics by burying them with legal threats and fees, but that’s not what’s happening here according to Mastrantonio:

We have paid the authors, we have paid the editors. The case is not a SLAPP suit by any means. It’s not an anti-first Amendment lawsuit. It’s simply a case where Dear Author has made a malicious and false statement about my client which has caused real damage to them. It’s a defamation case. We want to set the record straight.

Allegations like they made in a public forum, and causing panic among the authors and fans, that has the unintended consequences of affecting sales of the books and actually affecting the authors who want to get paid. So if people aren’t buying the books, the royalties go down.

For its repudiation of the allegations made by Dear Author, Ellora’s Cave has submitted an affidavit of testimony from Marks which includes a categorical denial of each point raised in the Dear Author blog post.

Despite the denials, authors and readers have lined up to show support for Dear Author. Popular romance author Courtney Milan coined the hashtag #notchilled in response to the suit, which she said was an example of a chilling-effect attempt to stifle free speech and free press. The hashtag has since filled with authors eager to stay updated and support Gerrish-Lampe.

Very happy to wake up and see that the @dearauthor defense fund has already exceeded it’s $50K goal. #notchilled

That it took less than 4 days to do says something really powerful. #notchilled

But not everyone is siding with Gerrish-Lampe. An anonymous Twitter account, @pubnt, has been tweeting publishing companies with the names of the list of known authors who contributed to the Dear Author crowdfund—claiming that any author supporting Dear Author is “actively participating” in the defamation attempt against Ellora.

The anonymous Twitter’s self-proclaimed attempts to protect publishing seem to have generated more support for Dear Author than ever. Even authors who support the publisher have started wondering why, if Ellora’s Cave can’t afford freelance editors, it can afford the legal fees for a defamation lawsuit.

@laurakayeauthor I want EC to survive & thrive too, but losing the faith of your authors is not the way to do it. #notchilled

Meanwhile, Ellora’s Cave is gearing up for its annual convention for authors and fans, RomantiCon, taking place in Ohio this weekend in spite of all the controversy. Earlier this week one of its biggest authors published a new bestseller. Engler herself has largely avoided the controversy apart from a call to be left alone:

Pls stop harassing me on twitter with name-calling and accusations by putting @jaidblack in your tweets. Take your hate elsewhere #NotCool

Regardless of which side of the dispute the truth ultimately vindicates, one thing is certain: All of publishing will be watching.