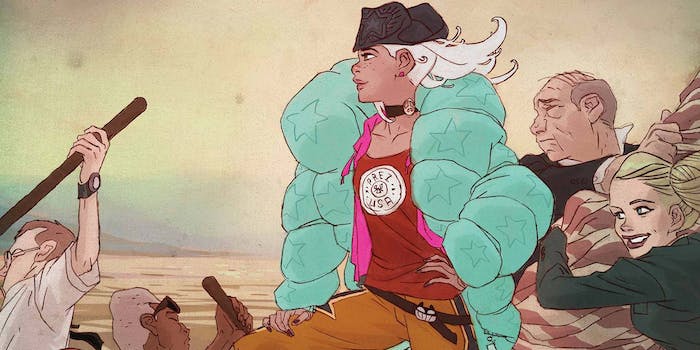 Why DC Comics’ ‘Prez’ is essential reading for the 2016 election

If you read one comic this election cycle, it should be DC‘s Prez, a goofy yet effective political satire set 20 years in the future.

The original Prez was a short-lived series in the 1970s about a teenager who becomes president thanks to the baby-boomer youth vote. He’s a pretty obscure character, best known for a single-issue appearance in Sandman, but the comic’s 2015 reboot brought Prez back in a big way.

The new Prez sees fast food worker Beth Ross get elected after becoming a viral video star. It has a lot in common with the colorful, energetic cynicism of Transmetropolitan, but with an optimistic twist: As president, Beth Ross does actually want to make the world a better place.

Prez is half dystopian satire, half wish-fulfilment fantasy about a presidency that isn’t beholden to lobbyists and superPACs. Beth Ross inherits a country where people crowdfund their medical bills on Sickstarter, and the military hires gamer bros to massacre civilians with remote-controlled robot drones. The main antagonist is a faceless businessman called Boss Smiley, a supervillain by way of Jeff Bezos. Yet among all this vicious absurdity, Prez still manages to be funny and moving—and above all, cool.

The first six issues proved surprisingly prescient for the 2016 presidential race (and, bizarrely, the U.K. prime minister’s pig sex scandal), earning buzz from comics critics for their sharp wit and youthful aesthetic. To mark the release of Prez Vol. 1 this month, we spoke with writer Mark Russell and artist Ben Caldwell about taco delivery drones, electoral loopholes—and how Prez‘s new protagonist was inspired by the pop star Grimes.

How were you influenced by the original Prez comics from the ’70s? I was wondering how you rethought the idea of a teen president for the modern political climate.

Mark Russell: In terms of the writing, I wasn’t terribly influenced by the original comics. The only influence I really took was its wackiness, having a lot of thinly veiled famous people of the era popping up in the comic book and commentary on current issues.

Ben Caldwell: For the art, I may or may not have snuck in a bunch of contemporary political figures—and also a couple of people from the original comic—into the new one without telling anyone. Sorry Mark! Surprise!

I think the biggest influence from the original comic book was Boss Smileyface. He just seems like a much better villain for the 21st century than for the 1970s, because he’s got that big glowing mask, the perfect symbol for corporate obfuscation, trying to remain opaque in an era of transparency.

What kind of characteristics did you think were important for a modern reboot of the Prez concept?

BC: I was given a brief by Mark and [editor Marie Javins] where Prez is obviously a teenager, she’s female and blonde. And then I was also told to give her… a punk aesthetic. Mark mentioned a particular musician that he liked, whose name I’m blanking on right now—

MR: I told him to use the pop artist Grimes for Beth Ross’s style and physical appearance. Also, we wanted to make her sort of ethnically neutral.

BC: We thought that having a blonde white girl saving the world optically might be too much of a “great white hope” approach. Especially when she’s supposed to be an everyman or everywoman character, and in the 21st century that’s less and less a straight-up caucasian person.

MR: Plus it comes into the story later—spoiler alert!

We wanted something that reflected her kind of do-it-yourself—I wouldn’t say anti-authoritarian, but certainly completely unconcerned with authority approach to governing. A complete disregard for convention.

It’s interesting to hear you were inspired by Grimes, because I was going to ask Ben about Beth’s fashion sense. It’s actually kind of rare to see a character who changes her clothes this often in comics, and her costumes are really great, so I was wondering if you’re a fashion fan.

BC: I’ve never liked the way superheroes wear the same costume every day. Can you imagine how disgusting those clothes would get? You’d constantly be washing your sweat off them, waiting around naked while you’re waiting for your cape to dry. It never made any sense to me. We wanted to give more a sense of a real person. 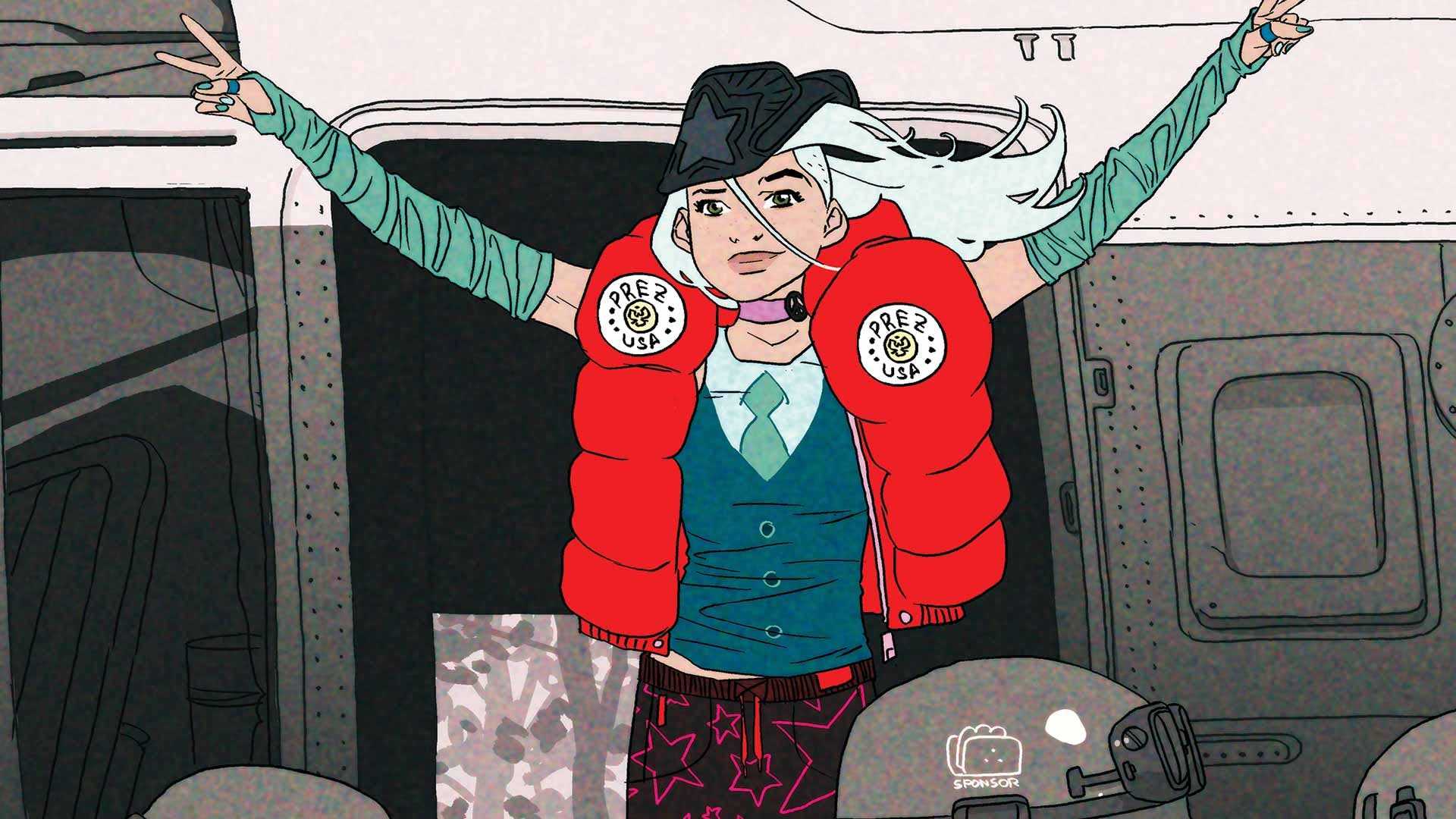 For the other background aside from Beth, what kind of research did you do? Or was it just things that you ripped straight from the headlines? Things like the taco drone seem… worryingly prescient.

MR: I just kind of mined my subconscious for obscure news stories that were still stuck in my head for some reason. The taco drone actually exists.

BC: The most disturbing thing is Mark’s uncanny ability to lift stories from the headlines a week and a half before they actually happened. That’s going to be lost on readers years from now when they look at Prez. They’ll think a lot of stuff was topical, it was ripped right off the headlines, but it’s kind of amazing getting scripts and then a week later seeing something that he put in as the most ridiculous shit possible, get blown up.

We literally could not make up stuff ridiculous enough to outstrip the real world. I’m not sure if that’s funny or depressing. 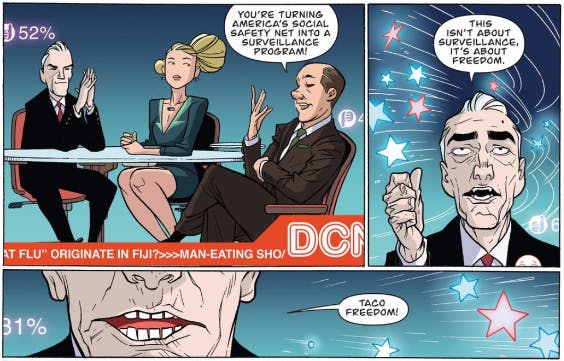 There’s also no joke, whether it’s a funny joke or a sad joke, that I won’t mine for everything I can. So the taco drones of course are something humorous, but I tried to use the same technological aesthetics for those and also for Boss Smiley’s creepy, bug-like helicopter, and for the large military drones. To get an idea that the seemingly harmless technology that’s used for fun and consumption is part of a larger and creepier subset of technology.

MR: I feel that in a way the satire is being constantly outflanked by reality, which is a pretty sad commentary on our times, frankly.

Considering the craziness of the real-life election just now, it’s made me curious about the original conception of the comic with DC. You’re almost predicting things happening in the campaigns—was that something that was part of the pitch when you first picked up the project?

MR: My initial pitch to DC was very much… how different the world is from when the original Prez happened, how important social media and Twitter and YouTube are to the election process, in a way they couldn’t have foreseen back then.

You know, we just had Donald Trump getting his Twitter followers to decide whether he shows up for the Republican debate. It’s not too far afield from imagining that actual presidential elections will be happening on Twitter. Or presidential candidates will have to appear on Jackass-type YouTube shows to connect with younger voters.

BC: The funny thing is, the way Prez is elected in the new comic is extremely traditional. There’s a surface weirdness of Twitter… but underneath it is the exact same process. And at the same time there’s this incredibly ridiculous but commonplace backroom dealing that in American politics has been a real constant for well over a hundred years.

MR: By the way, that scenario where Beth just wins by one state and sends the election to the House of Representatives? That’s completely possible. That’s what would happen according to the constitution if nobody won an outright majority in the electoral college. In fact, Michael Bloomberg’s sending out a presidential bid, and I think that’s his strategy. That he’d just win enough to push the election to the House of Representatives, where the Republicans control the majority of the votes, and he could squeak in and become president. Even though he didn’t get close to a majority of votes in the actual election itself. 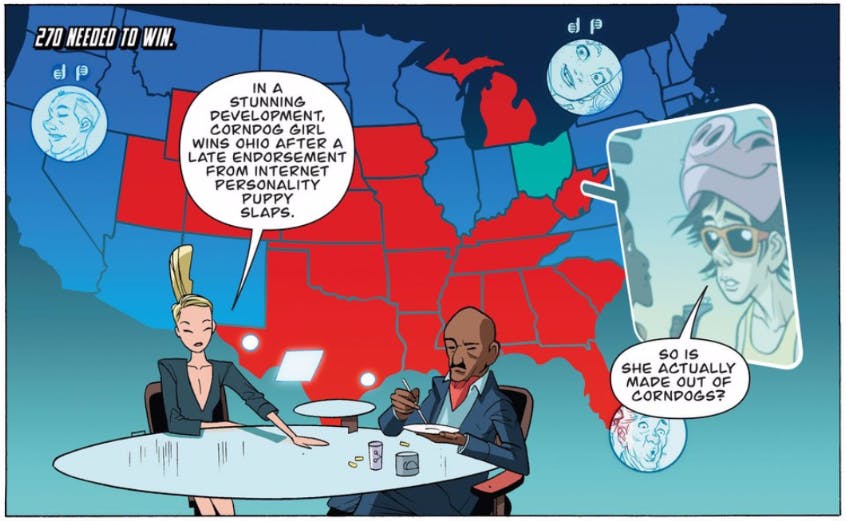 BC: Somebody took one of the throwaway maps we did of the election process, from the background of one of the panels, and they actually did an entire breakdown online of every single state. What the demographic shifts would be, and the electoral transformation, and how that would make Beth’s election possible. So yeah, it’s creepily viable.

Finally, can you share any details about the second half of the series? Is there anything you’re particularly worried might come true in real life?

BC: The second half deals with a lot of issues that the country’s going through right now. Race and sexism are prominent issues. There’s an issue about mass shootings, and attempts to limit women’s access to birth control. I don’t want to get too specific because I want people to read it, but yeah, I think it will be perhaps even more topical in terms of what’s actually happening now in the country, and in the political landscape.