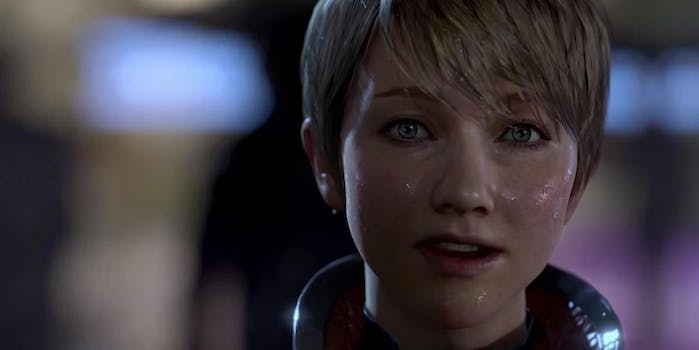 Detroit is the latest project from game developer David Cage

A French game developer known for trying to skew the lines between interactive games and cinematic storytelling is debuting a new project.

David Cage, the creative behind Quantic Dream studio’s Heavy Rain and Beyond: Two Souls, announced new dramatic title named Detroit on Tuesday at Sony PlayStation’s Paris Games Week. The game is about an android who wants to be human. The voiceover lays it on thick in the trailer. The graphics are fantastic.

Cage, whose career is defined by drama-heavy adventure games with cinematic aspirations, revealed a tech demo called Kara in 2012 about an android on an assembly line who shows signs of sentience, and begs not to be destroyed when a factory worker discovers her “malfunction.”

Kara, it turns out, is also going to be the star of Detroit.

Cage has been the subject of more arguments over the definition of a video game than perhaps any other game developer, for how unabashedly his games favor dramatic performance over kinesthetic challenge.

Heavy Rain, a story about a father forced to suffer horrific torture in order to save his son from death, was released in February 2010 for the PlayStation 3 and met with positive reviews.

No release window has been announced for Detroit. It will be a PlayStation 4 exclusive.