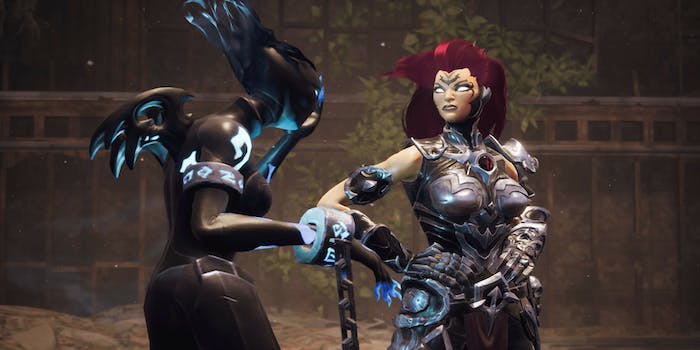 The latest chapter in the Darksiders saga carries the weight of its predecessors.

Controlling a harbinger of death should be anything but boring.

Since 2010, Darksiders has followed the story of the Four Horseman of the Apocalypse as they wage war across heaven and hell. For its time, the first title was a solid spin on the action genre. Combining Zelda’s dungeons and puzzle-solving with the hack-and-slash combat of more “mature” games was an entertaining, if derivative, experiment.

Darksiders III brings several changes, but it never escapes the shadows of the past. Players control Fury, a fierce mage, as she travels to Earth to destroy manifestations of the Seven Deadly Sins. Hunting these monstrous bosses makes for a great core conceit, but moment-to-moment gameplay never feels like more than a nuisance. In fact, the game’s most consistent definition is as a disappointing slog.

Six years separate this chapter from its predecessor, and Darksiders III plays like a game released a generation too late. Poor character models paired with drab environments elicit the standards of an Xbox 360-era action platformer. Even the approach to level design is an outdated reading of the open world. Wide, expansive cityscapes and vast canyons comprise many sections of this threequel. However, their variety is lacking, and they’re plastered with a sickly gray and brown palette.

This is not to say the game needed to be beautiful to succeed. But a dated presentation coupled with clunky, senescent controls leaves much to be desired. Too many levels are devoid of meaningful moments and secrets to discover, or else are just plain boring to explore.

Any exciting ideas from Darksiders III come in combat. This time around, Fury’s nimble agility frees up space to dig in, rather than mindlessly mash. Previous titles relied on bulky weapons and fast-paced combos. But III manages a lighter approach, making use of precise movements and magic powers.

Fury begins her quest with a whip. Armed to the teeth with flashy abilities, she crashes to Earth hot on the tail of Envy. Her chase gives way to a crumbling metropolis, devoid of citizens and populated only by pockets of hostile demons. This world feels dead—not in a somber, narrative sense, but in its lifeless surroundings.

Using Fury’s range of incising moves imbues some creativity into fights. Targeting individual foes feels gratifying, as does slamming down an airborne enemy. A changing set of perks and powers make some experimentation in combat possible. But for the most part, telegraphed enemy patterns and repetitive encounters reveal cracks at the game’s foundation.

Even the first boss fight, with a feathered, avian manifestation of Envy, falls victim to a mundane, awkward cycle. Her tricks are immediately transparent, and the encounter is drawn out only as the arena collapses. Following some burdensome acrobatics, Fury rises and slays her foe. It is an unceremonious occasion. Roughly an hour into the game, I already felt exhausted by the path my quest had charted.

If you can look past the cumbersome controls, Darksiders III offers a full journey. Traversing the land, beating grotesque creatures, and learning new skills flesh out an over-the-top narrative. When characters like the devious merchant Vulgrim enter the scene, there come moments of brevity and compelling systems. However, they’re few and far between.

As it stands, Darksiders III is sadly unremarkable. THQ Nordic plucked the series from eternal damnation after a bankruptcy in 2013. Some of the concepts from that long ago likely made their way into this title. If III could have been released as the proper cap to a trilogy, closer to its kin, it might seem more charming.

But, as an odd, seemingly disconnected but nonsensically intertwined chapter in this franchise, it just falls flat. To play Darksiders III is to engage with a relic of a bygone era, when stiff mechanics and empty space defined the action-adventure genre.

Darksiders III is available now for PC, PS4, and Xbox One. This review was written based on a PS4 copy of the game provided by the publisher.