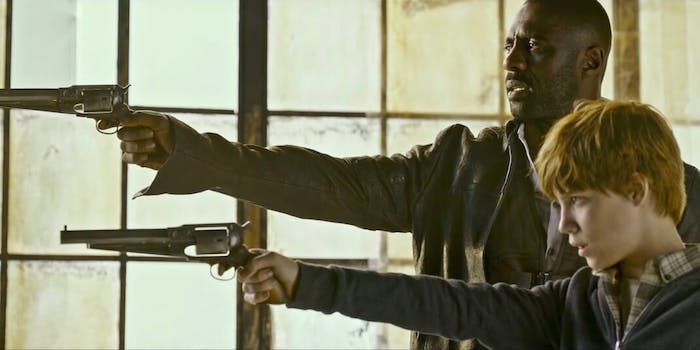 After months of waiting from fans, all guns are drawn for the first trailer for the film adaptation of Stephen King’s The Dark Tower.

For those unfamiliar with one of King’s most famous series, Idris Elba and Matthew McConaughey are the Gunslinger and the Man in Black, who are forever locked in a fight over the Dark Tower, which is the one thing holding the universe together. But their world isn’t the only world, as a young boy on Earth who dreams of them discovers that his dreams are real.

The trailer focuses on the Gunslinger’s expert firearm abilities and his rival, who he considers to be worse than the devil. It stays away from the fantasy elements of the novels, making the movie accessible for those who haven’t read the books. But for those that haven’t, the Gunslinger is really good at gunslinging.

Prior to the trailer’s release, Elba and McConaughey got into a bit of Twitter roleplaying to tease up their characters’ mutual animosity for one another.

.@idriselba You want the Tower?

To find the tower is my purpose. I'm sworn.

Then as the world’s last crusader don’t break your promise… you’re closer to the Tower than you know.

You know nothing of me.

The Gunslinger doesn’t shoot with his hand—he shoots with his heart. And his aim is deadly.