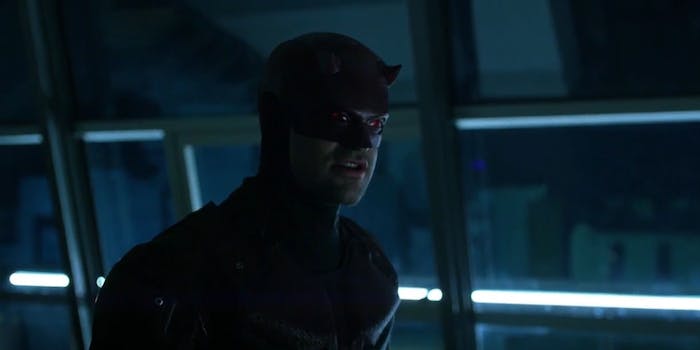 In season 2 of 'Daredevil,' Matt Murdock and Elektra take on a malevolent ninja organization.

The second trailer for Daredevil season 2 reveals a great deal more about the plot—and gives us our first real introduction to Elodie Yung as Elektra.

The first trailer mainly focused on the Punisher, highlighting the show’s strong action sequences and Matt Murdock’s ethical struggles as a vigilante. This one sees a lot more of Elektra (including her new, more practical costume) and her flirtatiously antagonistic relationship with Daredevil.

If Wilson Fisk appears at all this season, it will probably just be a cameo scene. Instead, Daredevil is directing his energy toward his city’s organized crime problem and the malevolent ninja organization known as the Hand.

Aside from the obvious mystery of why ninjas are attacking Hell’s Kitchen, this trailer raises some questions about how the show will build on the work of season one.

By choosing to focus on Elektra and the Punisher—two morally ambiguous characters with a long history in Marvel comics—Daredevil‘s writers have smartly avoided bringing in a new supervillain to fill Fisk’s shoes. On the other hand, the introduction of an evil ninja army may potentially fall foul of a serious weakness from last season: anti-Asian subtext. It’s impossible to make any real judgement from just two trailers, but this is something many fans will be looking out for in the lead up to Netflix’s Iron Fist adaptation next year.