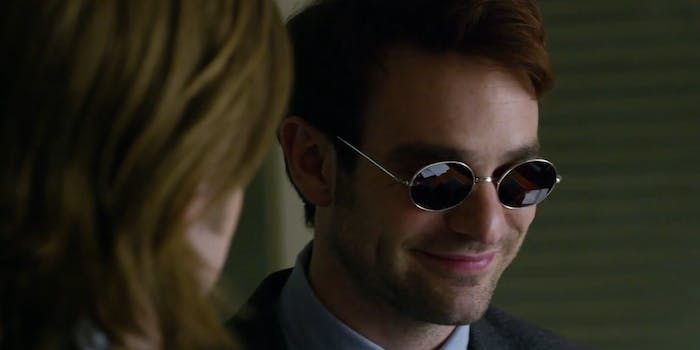 The new trailer for Marvel‘s Daredevil series introduces some of Matt Murdock’s friends and enemies and gives fans a better look at the show’s Hell’s Kitchen setting.

This trailer gives off even more of a Batman/Gotham vibe than the first one, although this was probably unavoidable. It’s a superhero show about a black-clad vigilante whose nemesis is a crime boss; at this point, we kind of know the drill. The bad guys want power and a chance to monologue mysteriously while facing away from the camera, while our lone hero just wants to clean up his neighborhood. And by “clean up,” we mean unleash his martial arts skills on unsuspecting petty criminals in the middle of the night.

We’re hoping Rosario Dawson gets a decent part to play in this show, because it would suck to see her relegated to a minor supporting role. Otherwise, our main prediction is that Vincent D’Onofrio will be a fan-favorite as the Kingpin. Marvel Studios movies can be kind of hit-and-miss when it comes to supervillains, but the Netflix TV format offers more time for villains and supporting characters to receive real character development.