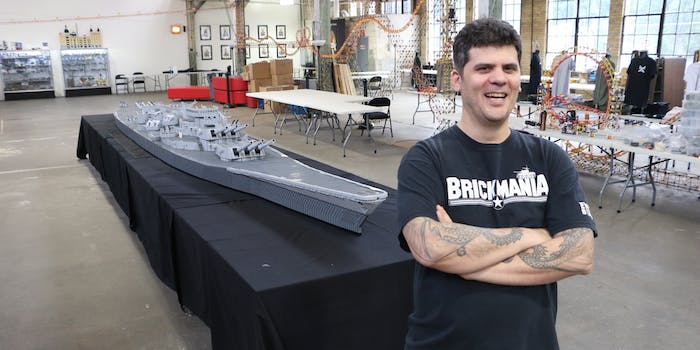 And he's not even done yet.

The ships that made an impact in World War II are coming to life in record-setting, bricked detail.

Dan Siskind, the Minneapolis-based owner of Brickmania, put together what he believes is the world’s biggest Lego ship by recreating a 1/35th scale of the USS Missouri. Standing at 25-and-a-half-feet long, it took Siskind more than 1 million bricks to complete the project; the previous record is 7.66 meters (25.1 ft.) for a Lego ship.

He breaks down the mechanics and technical aspects of putting together a gigantic Lego ship with Beyond the Brick host Joshua Hanlon in a detailed behind-the-scenes video before being shown to the public at World War Brick Minneapolis, which featured historical displays from Lego enthusiasts all over the world. It’s impressive to say the least.

It’s not just about getting the shape and feel right. Siskind’s aiming for historical accuracy (even down to the uniforms), making sure nothing breaks while traveling, and getting a proper support system built inside. He estimates he’s got about a month of building left on the project, and in that time he could potentially make it even more accurate with the help of keen younger fans.

Photo courtesy of Beyond the Brick