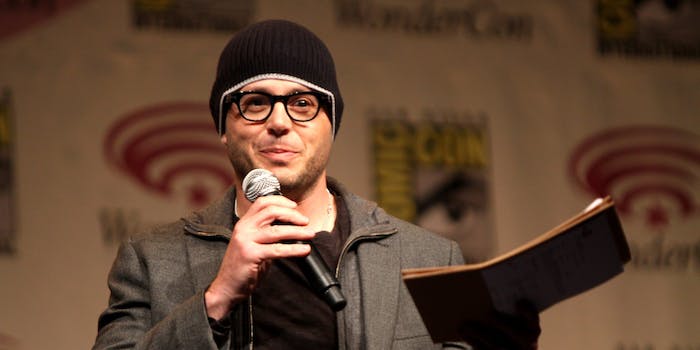 'I don't watch television to find things to gripe about.'

A Lost showrunner who knows a thing or two about fielding hate for his own shows has a message for the people who are constantly threatening to quit watching Game of Thrones.

Damon Lindelof, who is now a showrunner for HBO’s The Leftovers, praised Game of Thrones for what it’s been able to accomplish this past season in an “impassioned, impromptu take” for Entertainment Weekly.

He’s impressed as a fan, having read the first three books in A Song of Ice and Fire before the show premiered, but he stopped reading them to let the show surprise him with the latest twists. From a showrunner’s standpoint, he’s astounded about the scale and logistics of the multiple productions while still being able to create a show of quality; in particular, he called “Hardhome” “one of the most excellent hours of television I’ve ever seen.” And although there’s a part of Lindelof hoping the ending of Game of Thrones is terrible because George R.R. Martin is among those who didn’t like how Lost ended, he ultimately hopes it has a great ending.

But Lindelof has seen the fan reactions to the most recent season of Game of Thrones. He’s seen people take apart every episode, freak out, and even threaten to quit watching Game of Thrones because aspects of the show are drastically different from the books or it killed a favorite character—something we supposedly loved when the show killed Ned Stark back in season 1. In particular, he references the fandom reaction after Shireen Baratheon was burned at the stake by her father Stannis and the red priestess Melisandre.

… And I see people pushing against Thrones where it’s like, literally from week to week, someone will say, “This is the most excellent show, this season is firing on all cylinders, it’s never been better.” And then because of one story move—Stannis burns his daughter—suddenly [the reaction is] like, “I cannot watch this show anymore. I’m quitting you, Game of Thrones.” And I’m thinking: “No, you’re not. Don’t be an ass.” That’s like my 8-year-old saying, “We’re not best friends anymore.” When I see a blogger—thank God I’m not on Twitter anymore, because I get into all sorts of trouble—or a critic, or a recapper say, “I’m done with your show,” if I were running that show I would call them up and say, “You are not allowed to watch my show anymore. I’m going to f–king alert everybody in your life to watch you. I’m going to hire a private eye to tap your media consumption, and you better not ever watch it again. Are you sure you want to do this?”

In some regards, Lindelof has a point. Game of Thrones has been one of TV’s more faithful adaptations until recently, with season 5 being the first season that truly diverged from much of the source material. Unless The Winds of Winter is released before season 6, that trend may very well continue. Those book fans who don’t like the changes will have to decide if the show is still worth watching with those potential spoilers. And the changes, whether they like it or not, are part of the show.

And remember, Martin has said on multiple occasions that the books and the show are two separate entities. Some things that happen in the show won’t take place in the books and vice-versa.

But some fans have major gripes with how Game of Thrones portrays sexual violence and rape, especially toward its female characters.

For some fans and critics, however, they’ve hit a breaking point. The many rape scenes in the show, both adapted and created, are tough to watch—and they infuriated fans. It could be triggering, or maybe people are tired of watching women being beaten, tortured, and raped over and over (even if similar events did happen in history) with little consequence to the men who hurt them or exploring the how that affects the characters afterwards.

And people weren’t just mad that someone as young and innocent as Shireen died to further her father’s cause. It was how she died, and it was yet another example of the show portraying violence against women.

Whether it was Theon’s gratuitous torture, Cersei Lannister being raped by her brother Jaime, Sansa’s wedding night, Shireen’s death, or a scene in an upcoming season, more fans are coming to that conclusion. Meanwhile, the show is more popular than ever—so it ultimately doesn’t hurt Game of Thrones’s ratings at all.

At a certain point (if it hasn’t happened already), fans will have to reckon whether the positive aspects of the show outweigh the negatives. Lindelof and the people hating the “haters” might just have to deal.