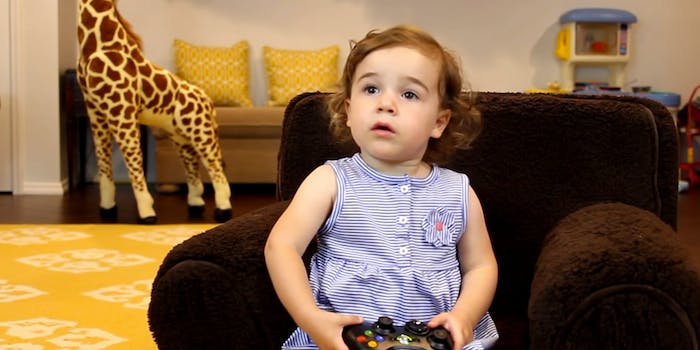 When dad (and Daily Dot Director of Audience Engagement) Matt Silverman tried to get his 2-year-old daughter Amelia excited about one of his own favorite childhood games, the results were about what you’d expect when trying to retain a child‘s attention.

As Silverman talks early ’90s video game philosophy and strategy, tiny Amelia wiggles, giggles, and struggles to hold on to the vintage game controller that’s as big as her head.

Nintendo’s Super Mario World was released in 1990 and dominated the market in simpler times for home gaming. Amelia’s interaction with the game is relatable and familiar. “Where’d Yoshi go?” she asks, then announces that Luigi is her favorite character: “The green one!”

Toward the end, Amelia firmly announces her decision: Super Mario World just isn’t all that much fun. Why? Because “it doesn’t have Frozen.” She then promptly regales the Internet with her rendition of “Let It Go.”

Silverman dropped three videos in the Free Dad Videos series this week. In one, Amelia and her pop cover the poppy hit “Shut Up and Dance.” In another, Silverman tries to convince Amelia that ’90s toys were cool—to which she responds blithely, “Snapchat.” Except she can’t exactly figure out how to pronounce it.

Later on in the 90’s toy review video, Amelia announces: “I’m a boy!” To this, her dad responds, “Hey, it’s 2015. You do you.” It’s sickeningly adorable the entire way through, especially when she asks daddy to define the lost term “tubular.”

Editor’s note: Free Dad Videos is not affiliated with the Daily Dot, and Silverman was not involved in the pitching or editing of this story.