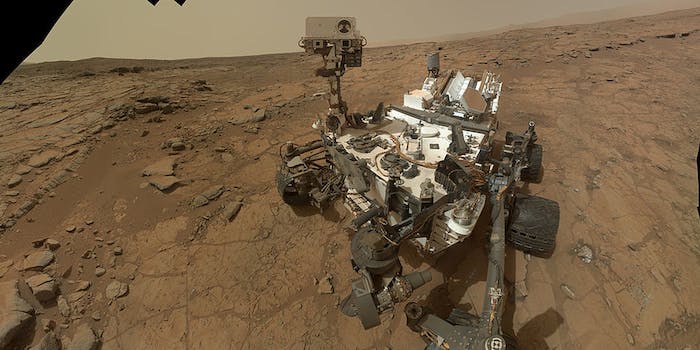 The Curiosity rover is ready for some Martian mountain climbing

The little rover that could is moving on up.

The Internet-famous Mars Curiosity rover (Sorry Opportunity! We love you too.) is preparing to climb the Red Plant’s Mount Sharp.

The SUV-sized rover has been trekking around Mars for two years, vaporizing rocks and learning about our neighboring planet. The climb up the mountain has always been a major mission goal, but Curiosity’s route has changed. The rover is starting up the slope near an outcrop called the Pahrump Hills instead of a previously planned, farther away Murray Buttes.

Both areas are at the boundary between the base of the mountain and “crater-floor deposits washed down from the crater’s northern rim,” according to a NASA press release.

“It has been a long but historic journey to this Martian mountain,” Curiosity Project Scientist John Grotzinger of the California Institute of Technology in Pasadena said in the release. “The nature of the terrain at Pahrump Hills and just beyond it is a better place than Murray Buttes to learn about the significance of this contact. The exposures at the contact are better due to greater topographic relief.”

Made it! After 2 yrs of driving over some pretty tough terrain, I’m at the base of Mount Sharp. http://t.co/OVdYuKLt1w

Once on the Red Planet’s surface, Curiosity’s cameras gave scientists back on Earth a better understanding of the lay of the land and the best routes to follow. The route modification avoided a region littered with sharp, pointy rocks that were poking holes in the rover’s wheels. Two years on the planet has aged Curiosity.

From now on, Curiosity will likely be doing less driving. A recent NASA review criticized the decision to indefinitely extend the newest rover’s mission and praised Opportunity’s contributions to science. Comments on the latest Curiosity news reflect this assessment:

“The wheels issue contributed to taking the rover farther south sooner than planned, but it is not a factor in the science-driven decision to start ascending here rather than continuing to Murray Buttes first,” said Jennifer Trosper, Curiosity Deputy Project Manager at NASA’s Jet Propulsion Laboratory in Pasadena, California in the news release.

“We have been driving hard for many months to reach the entry point to Mount Sharp,” Trosper said. “Now that we’ve made it, we’ll be adjusting the operations style from a priority on driving to a priority on conducting the investigations needed at each layer of the mountain.”

NASA’s all worried that I’m not doing enough science. That’s like worrying that a unicorn isn’t being majestic enough.