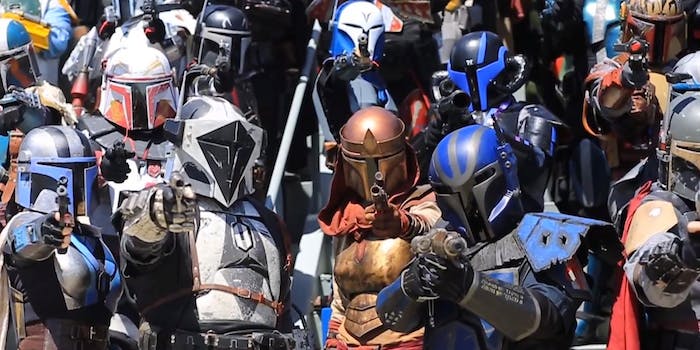 Members of the 'Star Wars' costuming community discuss their love for the franchise and the cosplay it inspired.

The Star Wars universe contains a wide range of characters, species, and settings, so it’s no surprise that it has inspired some extremely creative cosplay. YouTube series Cosplay Boom explores this world in their latest episode through interviews with a wide range of cosplayers.

The episode features major cosplay organizations like the Mandalorian Mercs and the R2 Builders Group, and the passion these fans have for Star Wars shows not only in their amazing cosplay but also in their enthusiasm for discussing the franchise’s films, video games, and characters.

“This video was mainly shot at Star Wars Celebration in Anaheim but there are also interviews from other conventions from the last year as well,” Cosplay Boom director Todd Kenreck told Polygon. “This is by far one of my favorite episodes, the stories of human connection are really fantastic all the Star Wars fans had a sense of community and optimism about the new movies and the games. Which was refreshing, they’ve been hurt before.”

That sense of community comes across strongly in the video.

One cosplayer talks about meeting the bulk of their friends through their costuming. Another cosplayer, Sarah Smith, discusses having a rough first year in the military while away from home—having to make all new friends—and reaching out to a costuming club she was part of but hadn’t spent a lot of time with.

“I reached out on the Internet, on the boards and was like ‘Hey, I’m new, I’m in town, and I was wondering if I could come spend time with y’all at some events,'” she said, “and they welcomed me in with open arms and became a second family to me when I was in a state where I knew literally no one.”

Not only will some of the cosplay in the video surely inspire you to try your hand at your own Star Wars costume, but it’s a great overview of a community that will only continue growing as more people discover Star Wars through all the new material the franchise.

You can find more of Cosplay Boom’s videos on their YouTube channel.