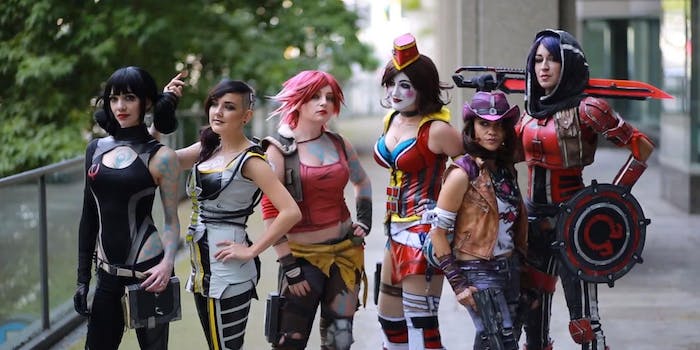 The cosplay community gets the documentary series it deserves

"These are people who are doing something extraordinary. This isn't just a story about cosplayers, it really is a story about all of us."

When Todd Kenreck was a kid, he was bullied for being nerdy. Standing up for himself didn’t make the experience feel any less alienating, and that sense of still feeling alone is one that he remembers to this day. It’s something that helps him connect with the cosplay community he hopes to explore in a new ongoing YouTube documentary series called Cosplay Boom.

“To see many others go through that same thing and express themselves in the most elaborate heartfelt ways later on in life is inspiring,” Kenreck told the Daily Dot. “They found their people; I feel like I have too.”

Kenreck is producing and directing the webseries with his fiancée, executive producer Meagan Sadler. The series will explore the art of cosplay and share the stories of cosplayers from across the country. The first episode, titled “Cosplay Boom: Origins,” premiered Wednesday and featured the stories of how cosplayers first became involved in cosplay and what it means to them. The most touching stories in the episode highlight people finding acceptance in the community and breaking out of their shyness through their cosplay.

Kenreck said they traveled to about 12 conventions in nine months, interviewing hundreds of cosplayers for the series. In the first episode, you might recognize some well-known cosplayers among the interviews and even Richard Taylor, special effects director for The Hobbit.

“Richard is remarkably talented and giving with his time. It was important to show audiences that cosplay isn’t any different than any other art,” Kenreck said.

These additional viewpoints will continue to be included in Cosplay Boom; other artists from Weta Workshop and professionals in the video game industry were also interviewed for the series. If you listen to the soundtrack, you’ll notice one video game industry professional has already made a contribution. The music was composed by Mass Effect’s Sam Hulick.

Whether the Cosplay Boom team can comission more tracks from Hulick for future episodes depends on how much they raise with their Patreon. Kenreck said asking for money was the hardest thing he’s ever done.

“We earn virtually nothing from YouTube. That is why Patreon exists and is crucial now, so artists can keep working. We have only 33 patrons on Patreon right now. We need many, many more to keep going,” he said. “Patreon is great way connect with creators and fans. I’m very thankful that site exists.”

If they get enough backers, the Cosplay Boom team would like to fly to more conventions, hire additional photographers, and turn Cosplay Boom into something much more than a webseries. These possibilities include a news site about cosplay, a live show, a social network that helps cosplayers connect, and even a Cosplay Boom Expo.

The team has had success with crowdfunding in the past. They funded their first season through a campaign on Kickstarter earlier this year. However, since they failed to reach stretch goals, they are not able to fund these extra projects without Patreon.

Until they receive more support for these additional projects, people can continue to keep an eye out for more Cosplay Boom episodes on YouTube. They hope to release cosplayer spotlights every week and full episodes at least once a month.

For Kenreck, it’s all about telling the still-untold story of cosplayers who he sees as “some of the most beautiful, talented, and giving people you could ever meet.”

“I love getting to know cosplayers, hearing how they make their costumes, how they grew up, what they love, why they love,” he said. “These are people who are doing something extraordinary. This isn’t just a story about cosplayers, it really is a story about all of us.”