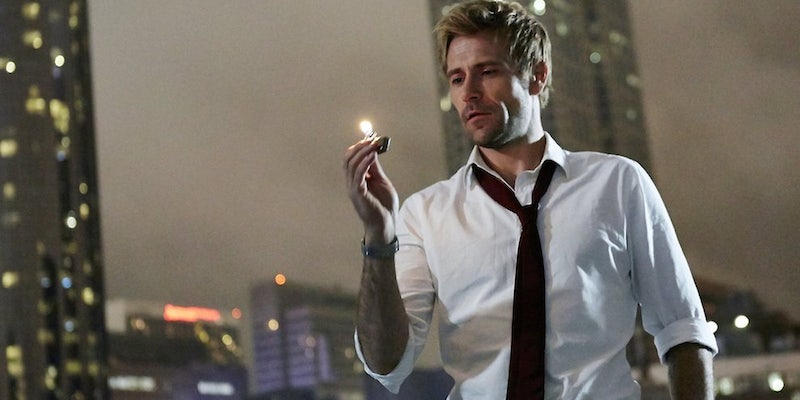 TV censorship may affect the plot of NBC’s Constantine, although perhaps not in the way you’d think.

The original Hellblazer comics were aimed squarely at an adult audience, and therefore were chock full of sex, violence, and adult storylines. But oddly enough, the one thing that has been forbidden from the TV adaptation is… smoking.

When the show was first announced, longtime fans of the Hellblazer comics immediately had several concerns. First, would Constantine be a blond guy from Liverpool, or would this new adaptation be in the same vein as the American Keanu Reeves movie reboot? Secondly, would network TV allow Constantine to keep his trademark chain smoking habit?

Showrunner David S. Goyer fought for Constantine to be allowed to smoke on TV, but it looks like he’s out of luck.

“You can’t smoke on network,” Constantine director Neil Marshall told Collider this weekend. “That’s one of his character traits.  We’re working around that.  We’re trying to get aspects of it in there as much as possible.  We’ll see.”

Smoking isn’t just an iconic aspect of John Constantine’s character, it also has a significant effect on his life story. After discovering that he has terminal lung cancer while he’s still in his 30s, he sells his soul to two rival lords of Hell. This resulted in them curing his illness, because his death would lead to them having to start a war over his soul. Constantine’s smoking was also a major part of the Keanu Reeves movie, which portrayed the habit in a similarly negative light.

NBC’s cigarette ban effectively puts the kibosh on this storyline. Marshall said that while he doesn’t know what will happen later in the series, there are no hints in the pilot episode that Constantine might have cancer.

This smoking issue feels reminiscent of Supernatural’s strange attitude toward adult content: brutal violence and horror are allowed, but no character can use a curse word harder than “bitch.” Marshall mentioned to Collider that he wanted Constantine to be “as dark and scary as possible,” comparing it to the disturbing nature of Hannibal, which also airs on NBC.

So, Constantine will probably include a lot of death, gore, and demonic entities, but cigarettes are apparently a step too far.