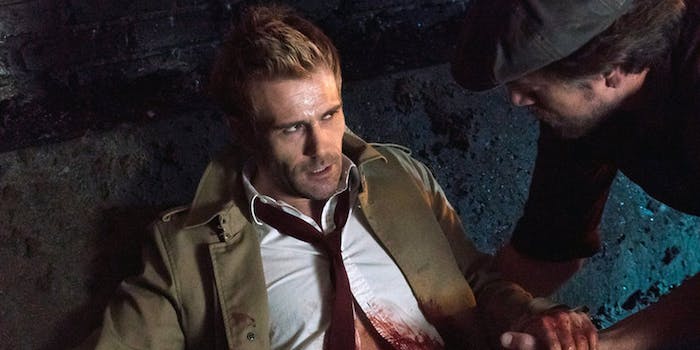 Will the first season of ‘Constantine’ also be its last?

The show's mistake was trying to fit in with bland network TV formulas.

The first season of Constantine just wrapped up on NBC, with little hope of renewal. Rumors suggest that Warner Bros. may try to move the show to Syfy for a second season, but for now it seems more likely that its 13th episode will be its last.

NBC’s plan for Constantine was to combine procedural crime TV formulas with the supernatural noir tone of the Hellblazer comics. It never really succeeded. By giving the show a monster-of-the-week structure, it wound up feeling too similar to Supernatural, but without Supernatural‘s heart or sense of purpose. And by trying to turn Hellblazer‘s downbeat, antiheroic narrative into an ensemble show, Constantine felt like it was constantly fighting to find reasons for more characters to be onscreen. Sidekicks Zed and Chas were often left out of episodes with no explanation, and even when they were there, it wasn’t always clear why they were sticking around in the first place.

The 13-episode order didn’t help matters. After NBC decided not to pick up the show for the rest of its first season, Constantine was left stranded with a season-wide arc devoid of meaningful events. The last few episodes attempted to ramp up an unspecified “rising darkness” conflict between good and evil, but with the season finale tackling yet another generic horror villain (a satanist who lives on a fairground and kidnaps teenage girls), we never got any real payoff.

Constantine rarely captured the spirit of Hellblazer, aside from a few satisfyingly cynical moments, like when Constantine tricked an old friend into sacrificing his own life. While a few episodes were adapted directly from the comics, they starred a version of John Constantine that lacked the individuality or the counterculture appeal of the original.

To a certain extent, this can be blamed on the desire to adhere to recognizable network TV formulas. Constantine‘s procedural format was an attempt to retain reliable ratings, in the same way that Supergirl, The Flash, and Gotham have adapted comic book concepts to the crime TV genre. In Constantine‘s case, this strategy failed, but the good news is that if it does make the leap to Syfy, things could change.

Aside from the fact that Constantine‘s remaining fans would be glad of the renewal, Syfy is probably a better home for the show. Syfy’s audience would be receptive to a creepier and more genre-savvy Hellblazer adaptation, and there could be less pressure for the writers to follow their current formula. The best-case scenario would be a semi-rebooted version with fewer Supernatural format episodes and more in common with the comics, but we won’t know more until NBC announces its decision.

In the meantime, there’s a #SaveConstantine campaign going strong on Twitter, proving that Hellblazer fans remain loyal till the end.