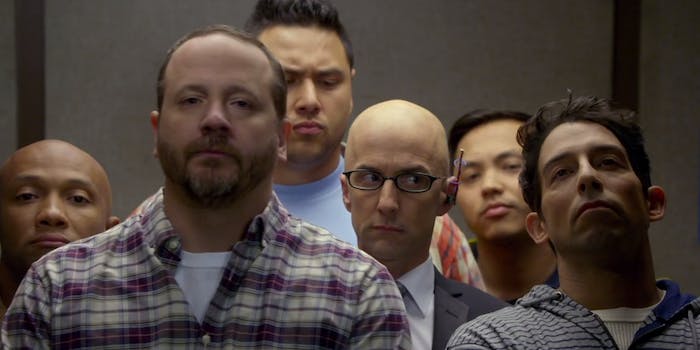 They thought he'd be an easy target.

While we’ve been freaking out about Game of Thrones and Mad Men, Community has quietly airing its sixth season on Yahoo, and its most recent episode demonstrated that its homage and parody game is still top-notch.

The episode “Modern Espionage” finds everyone in a secret game of paintball that once again sets the entire school up against one another. While it’s the fourth time it’s used the “paintball game goes horrifically awry” plot, Community managed to still make it feel fresh with a callback to one of the more iconic scenes from Captain America: The Winter Soldier.

This time around, Dean Craig Pelton—who’s been shot at dozens of times but never got to play himself—is the Captain America bait to five Greendale janitors who see him as an easy target to gang up on. There’s no shield in sight, but the Dean manages alright, even if it’s more of an accident than anything else. Of course “Daybreak” is playing in the background.

Not only is it a callback, but it’s an homage to two Community alum: The Russo brothers, who’ve directed dozens of Community episodes each, helmed The Winter Soldier. Danny Pudi, who plays Abed, also cameos in the film, but we’re not sure whether seeing the film blew his mind.