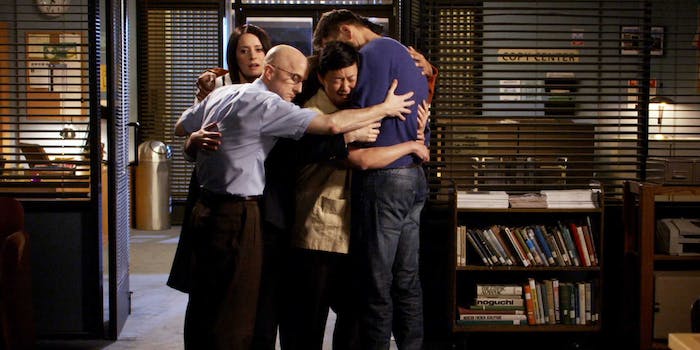 Yahoo lost a ton of money on ‘Community’

This looks like the final nail in the coffin for a seventh season of 'Community.'

CFO Ken Goldman admitted this week that Yahoo lost $42 million making the sixth season of Community along with two original shows, Sin City Saints and Other Space. When Yahoo bought the rights to Community, it supposedly offered a similar budget to the show’s run on NBC, which came to around $2 million per episode.

Goldman concluded that for now, Yahoo “couldn’t see a way to make money over time” on its original programming, which streamed for free on Yahoo! Screen.

While Goldman didn’t rule out the possibility of making more TV shows in the future, it’s pretty clear that Community won’t be returning to Yahoo. Even with the help of blatant Honda advertisements embedded into the show, Community didn’t have enough advertisers or viewers to be remotely profitable. Not even Community’s enthusiastic online following could make it a popular choice.

However, that doesn’t mean other cult shows are similarly doomed. Arrested Development seems to be doing fine on Netflix, for example, and Veronica Mars obviously found success with Kickstarter. So don’t lose hope for that Community movie just yet.