Did you spot all of these secrets?

Community is excellent when it comes to parodies and homages, but what may be even more impressive are the Easter eggs sprinkled throughout the series for fans to discover.

The nerd cred and creativity of Dan Harmon and his fellow writers runs deep on this show, and while they’ll sometimes go for the obvious gags, they’ll also plant in the sort of things that might end up taking multiple viewings to actually spot. And when you do, it changes everything.

From the whiteboard gags to the phrase “streets ahead” coming into our vernacular due to a fan’s insult toward Harmon, the show’s Easter eggs can transcend scenes, seasons, and even the show itself. They’re part of what makes the show weird and lovable, something Yahoo promised to uphold in a season 6 trailer.

We’ve put together some of the show’s biggest Easter eggs, and while it’s by no means a complete list, you may end up doing a double-take upon a rewatch—or even spot something new.

If you say “Beetlejuice” three times you can summon him. That’s one of the rules established in the Tim Burton film, but that logic also applies in Community. But it doesn’t have to be all at once. This Easter egg took three years to pull off, coming to a finish during season 3’s “Horror Fiction in Seven Spooky Steps.” As Annie Edison mentions the name for what is the third time, you can spot Beetlejuice walking by in the background.

In “Critical Film Studies,” Abed Nadir tells Jeff Winger about his time as an extra on Cougar Town, one of his favorite shows. He’s having an existential crisis, because how could he be a fan of Cougar Town when he now exists in the world of Cougar Town? That experience ended badly for Abed and his bowels, but his cameo actually made it into the show’s finale “Something Good Coming.” Danny Pudi, playing Abed who’s playing an extra, basically did everything an extra shouldn’t do when he’s on camera—but it made it into the scene anyway. Even part where Abed crapped his pants.

The crossover between two rival network shows was fairly unprecedented. And then a few episodes of Community later, Cougar Town’s Busy Philipps and Dan Byrd quickly popped up in “For a Few Paintballs More” as fellow Greendale students.

When another one of Annie’s pens goes missing in the study room, she pretty much loses it and accuses everyone else of stealing it from her in yet another episode that threatens to tear them apart. It was all for naught, for the end of the episode reveals that Annie’s Boobs—the monkey who lives in the air ducts connected to the study room—actually took it (along with all the rest of Annie’s pens). And if you can take your eyes off the puppy Dean Pelton is holding long enough to observe the surroundings, you can even see the exact moment it goes missing.

The annotated box in the YouTube video helps, too.

The Greendale Community College website now directs to Community’s official Tumblr page, but back when NBC aired the show it led to a fake college website with the sort of thing you’d see on a real college website: info on classes, admissions, and the campus. The featured students section showcases the major characters, and in particular Pierce lists his favorite movie as Fletch. The fact that it stars Chevy Chase, who played Pierce on the show, would be enough of a meta reference to blow Abed’s mind. 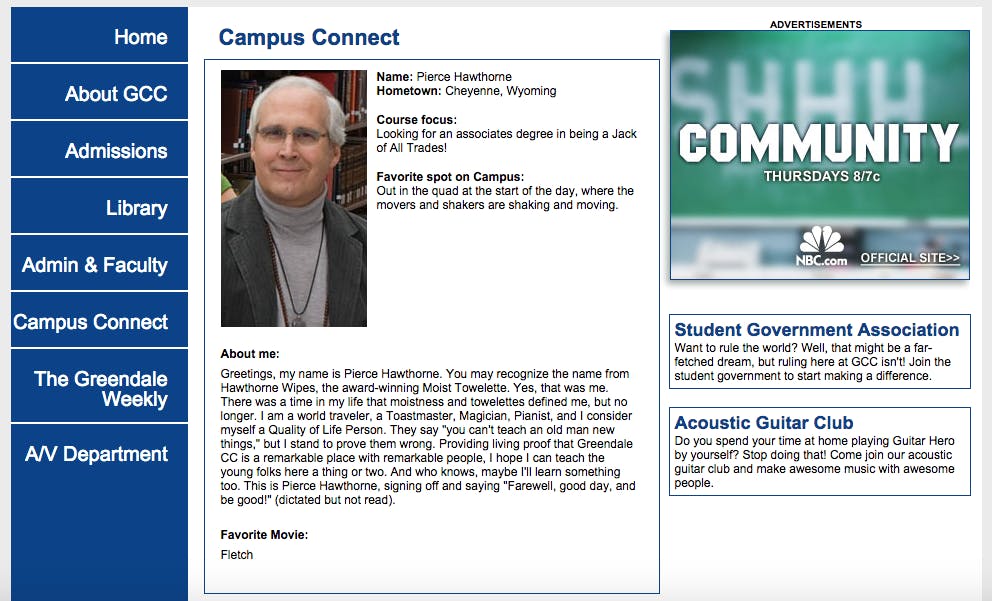 5) Community and Mad Men exist in the same universe

Along those same lines, Abed puts on his best Don Draper impression to attempt to woo Annie in a season 1 episode, which is viewable at Vulture. He must have skipped some episodes because he would’ve probably noticed that Annie looks just like Trudy Campbell from Mad Men—both are played by Alison Brie.

6) Abed delivers a baby in the background of an episode

Abed is usually one of the major driving forces of Community episodes, but in season 2’s “Applied Anthropology and Culinary Arts,” we don’t see him all that much—something we probably don’t even notice until Shirley Bennett points it out. But as the episode plays out, he ends up having his own adventure completely in the background. He befriends a pregnant woman, gets chased off by her boyfriend, and when it comes down to it, helps her give birth. Oh, and he may have possibly been the reason that baby existed.

7) The recurrence of “Daybreak”

The jazz melody by Michael Haggins is nowhere near a household name, but it was on Abed’s mind as he included it specifically in his Halloween horror story in “Horror Fiction in Seven Spooky Steps.” It’s his favorite song. And despite it derailing his story a bit, “Daybreak” reappears no less than 10 times throughout the series to date.

Back in 2010, Donald Glover had a bit in his standup routine about all-white superhero movies, which started a fan campaign to cast Glover as the new Spider-Man before Andrew Garfield got cast in the role. As we see Troy Barnes wake up in the season 2 premiere, his character is a Spider-Man fan too.

If you’ve seen enough episodes of Community you’ll notice that Abed has an incredible (and sometimes creepy) attention to detail. Of course, Annie, Shirley, and Britta Perry try taking advantage of this fact to bully the popular girls of Greendale in “Aerodynamics of Gender.” He does that by scanning them Robocop-style, and within the scans you can find the episode synopsis, hint to future events such as the stop-motion animation Christmas special, his obsession with Cougar Town, building a blanket fort with Troy, and the paintball sequel.

10) Dan Harmon gets a shoutout

And it comes in an unexpected place. Britta is among the nominees for Greendale’s “Tranny Queen” (which is short for Transfer in this instance) at Greendale’s transfer dance in season 1’s “Pascal’s Triangle Revisited.” One of them—Danielle Harmon—is named for the Community creator.

11) The cameo from Donald Glover’s past

Glover was a member of sketch group Derrick Comedy with Dominic Dierkes and D.C. Pierson, who ended up appearing as part of the wedding crew Abed set up between Jeff and Britta in a season 2 episode.

In “Conspiracy Theories and Interior Design,” a chase through Troy and Abed’s blanket fort gets interrupted by a Latvian Independence Parade marching through the fort. On the surface it looks like a random gag and plot device to break up the chase. But by sheer coincidence or design, the timing couldn’t have been more perfect: The episode aired on Nov. 18, 2010—the same day as Latvian Independence Day.

We were sad to see Troy and LeVar Burton head off into the sunset (and on their journey around the world) in season 5’s “Geothermal Escapism” as part of gaining the inheritance Pierce left him. But in “Analysis of Cork-Based Networking,” just one episode later, it doesn’t look like that trip is going so well, as spotted in the crawl bar of a different news report. 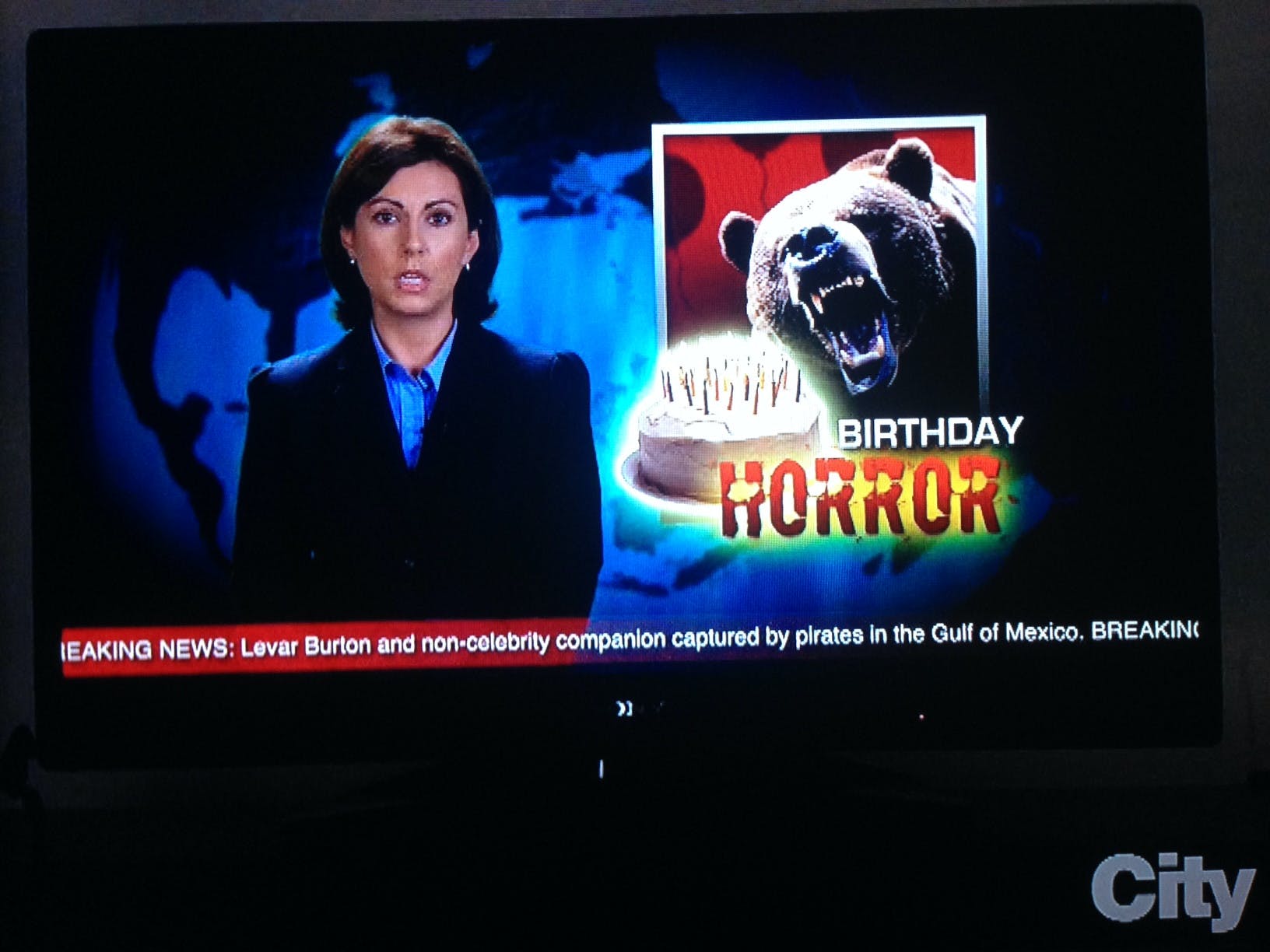 The episode after that references Abed trying to make a satellite version of “Troy and Abed in the Morning” happen with him in the whiteboard in the study room and show Troy’s last known coordinates to the Bermuda Triangle.