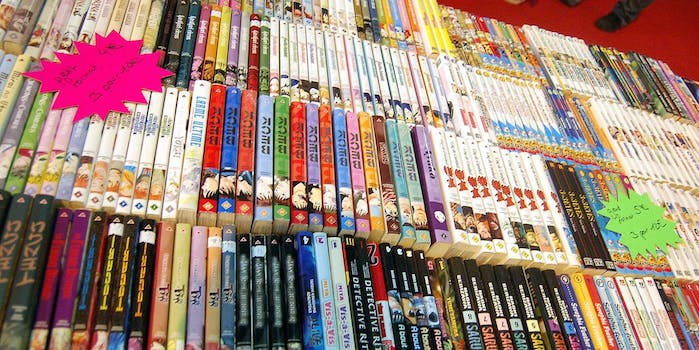 Tokyopop has returned with a new manga publishing app, but comics creators are warning people to stay away.

American manga publisher Tokyopop was ubiquitous in the early 2000s, bringing mass-market manga to an entire generation of new readers outside of Japan. Yet when Tokyopop creator Stu Levy returned this year with a new app called POP Comics, it was met with a flood of backlash from the comics community.

First, a bit about the app. POP Comics allows manga creators to share their work with readers, with creators taking a 70 percent cut of any advertising revenue from their comics. It’s nowhere nearly as reliably lucrative as a traditional publishing deal, but is certainly appealing to up-and-coming artists in the same way that Amazon‘s self-publishing tools have found favor among writers of all stripes. So, why did POP Comics provoke such an overwhelmingly negative reaction within days of its official launch?

set your comic pages on fire and submerge your harddrive in the river. Better than selling your work to tokyopop

Tokyopop’s story is certainly a fraught one. The publisher peaked in the early 2000s with its massively popular run of “authentic manga” books printed right-to-left, which was conveniently faster and cheaper to publish than rearranging the original Japanese page order. Its immense rise spawned an English-language manga fandom that was gone almost as quickly as it had emerged. Tokyopop collapsed in 2011 amid financial losses and controversial copyright disputes.

Five years later, Tokyopop’s enduring legacy appears to be a widespread belief that it mistreated young artists and writers by offering potentially exploitative contracts where intellectual property rights were split 50-50 between the publisher and creators. Speaking to Comics Alliance last year, Rikki Simons, co-creator of the Tokyopop series Shutterbox, had this to say about his experience:

A co-ownership of copyright between a creator and publisher is a terrible, dishonest trick. A co-ownership of copyright is really a dirty version of the work-for-hire. To throw away your moral rights and share a copyright with a publisher who has more money and power than you means that, realistically, they own the whole thing… and when the publisher finally goes out of business, and it will eventually go out of business because everything, everything, everything dies eventually, your work will die with them.

When POP Comics was launched last month, alarm bells began to ring due to Tokyopop’s unfortunate reputation. Suspicious of the “no fine print” pronouncement on the POP Comics website, comics fans immediately began investigating the claim.

POP Comics promises complete control of copyright to the creators, who post their work straight onto the app without editorial input. The experience is similar to publishing a story on Wattpad or uploading a video to YouTube, though POP Comics’ terms of service seem especially malleable.

In particular, POP Comics warns that it may change its terms of service at any time, “at our sole discretion, without your consent.” Given Tokyopop’s history, people are worried that the app may decide to covertly change its copyright policy. POP Comics also has the right to edit or delete any “user content” at any time, although this is fairly typical for a free online publishing platform.

After the backlash of the past few days, it’s clear that people haven’t forgotten the impact Tokyopop had on creators like Simmons as well as Alex de Campi, both of whom have publicly spoken out about their difficulties with the publisher.

If Stu Levy wants POP Comics to become the Wattpad of manga publishing, then he needs to regain the trust of the community Tokyopop seems to have alienated five years ago. Judging by the number of people currently warning young artists to avoid the the app at all costs, that process is still a work in progress.