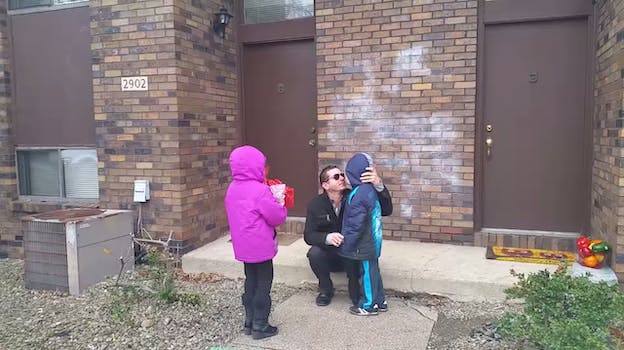 Red-green color blindness affects roughly 8 percent of men and 0.5 percent of women of Northern European ancestry, leaving them unable to tell the difference between red and green. (Imagine how much that must make driving suck).

Most people with this affliction are usually born with it. They don’t realize they are colorblind until grade school, when they take those tests with the numbers hidden in the colored dots. But most colorblind people adapt and lead perfectly normal lives, a bit less colorful. After all, you can’t miss what you don’t know, right?

Well, here’s a video of a grown man being brought to tears because, thanks to some fancy new specs, he can finally see full color for the first time in his life:

If that didn’t at least get you a little choked up, then perhaps you should take the psychopath test after the color blindness test, because that shit was beautiful man. Anyway.

The glasses the man wears in the video are obviously not ordinary sunglasses, but EnChroma glasses with special corrective lenses that improve color vision in people with red-green color blindness.

Color blindness occurs when at least one of the three types of color-sensing cells in the eye, called cones, get a little messed up. This is usually caused by a genetic defect on the X chromosome, which is why color blindness affects more men than women. As long as women have at least one functioning gene for the cones on either of their two X chromosomes, they should have normal color vision. Men only get one “chance” to have all the right genes on their single X chromosome, so they are more vulnerable to color blindness.

In a person with red-green color blindness, either the red or green cones malfunction, causing the cones to send overlapping signals to the brain. These signals essentially cancel each other out, leading to an inability to see the difference between red and green.

Although the glasses are pretty amazing, they’re not perfect. According to the company’s website, EnChroma work best outside in bright daylight. Someone wearing the glasses won’t pass a color blindness test taken on a computer screen, for example, because the screen is too dark.

Right now, the EnChroma glasses only definitely work for red-green colorblind people. But the website says that in theory, the glasses should work for people who have blue-yellow color blindness as well.