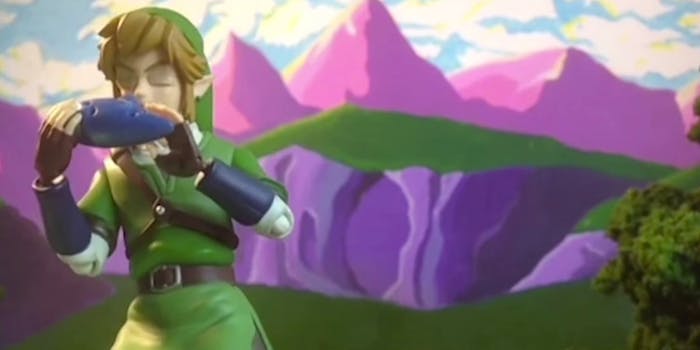 ‘Legend of Zelda’ gets a legendary claymation adventure on Vine

His fighting skills are even more swag in stop-motion.

We’re two months into 2015, and you’ve probably already abandoned your New Year’s resolutions and returned watching too much Netflix and playing around on the Internet.

While the rest of us were wasting our lives, a Vine user named Johnny McHone has spent the last two months making an incredibly detailed stop-motion animation adventure starring Link from The Legend of Zelda.

Seriously. Like we didn’t already have enough reason to feel like perennial underachievers, now a series of six-second Vine clips is making us feel worse.

But honestly, these are amazing. The series started in January and ended this week after 29 installments created under the hashtag #LinkandtheVine.

The story sees Link questing to find a treasure and fighting off claymation monsters:

In the end, he finds, what else? A Vine treasure chest.

Once finished, McHone compiled all 29 short films into a full video. The whole animation is barely 3 minutes long, which is still basically the Vine equivalent of War and Peace.

McHone is a professional stop-motion animator, which is pretty obvious based on the quality of the work. It’s not his first foray into Vine animation; in February he won an award for this short, surreal Vine series:

So what have you done with your life lately?