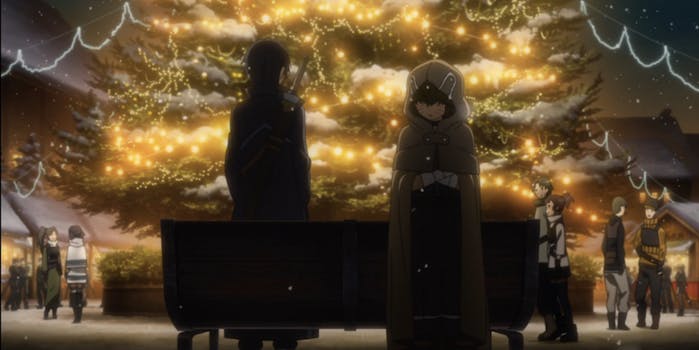 With Christmas just days away, you’re probably desperate for something to end the tedium of endless traditional Christmas specials that have paraded across your TV this month (or you already watched them all and are in need of new fodder). Fortunately, if you’re an anime fan, you have plenty of alternatives to keep your spirits high this holiday season. Nothing better reflects Japan’s love of the season than Christmas anime.

We asked the staff of popular anime streaming site Crunchyroll to send us their favorite yuletide-flavored anime recommendations. The result: a great list of festive holiday episodes from a variety of anime that fans of all ages can enjoy. This isn’t your typical Christmas story, but then Sword Art Online isn’t your typical high school anime. This popular dystopic anime has trapped thousands of unwitting gamers inside a bleak game world where their only way out is to either beat every other player in the game, or die in reality. This is a true Christmas episode—but there’s a moment when you realize that SAO isn’t going to pull any punches. This adorable light anime turns in an episode that’s full of fun and heart. Let this charming animal menagerie of polar bear, penguin, pandas, llamas, and more teach you the true meaning of the holiday season.

Crunchyroll Synopsis: Panda is expecting a wealth of Christmas gifts, but the only one who seems to get him is Rin Rin, and Penguin just wants to party. With the new Digimon series on Crunchyroll, fans of the original have had plenty of nostalgia to indulge in. But even non-fans will enjoy this fun little Christmas party, which ends in classic Digimon style—with monsters, natch.

Crunchyroll Synopsis: As Christmas approaches, the DigiDestined take on a festive mood. Ken goes so far as to throw a party (the first time he was truly happy in a long time). The younger group brings the digimon partners of the original DigiDestined into the real world. However, their holiday cheer ends when control spires and rampaging digimon appear worldwide.

4) Is the Order a Rabbit?  Episode 11—“The Girl Dons a Red Coat and Drives a Team of Rabbits Across the Christmas Eve Night Sky” The ultra-cute girls of the Rabbit House coffeeshop are determined to celebrate Christmas with as many delightful traditions as possible! This episode explores a pleasing variety of Christmas customs, along with the friendship between the characters. It’s a total treat even if you’re not familiar with the anime as a whole. R.O.D. is a clever series that frequently takes on the themes of classic literature, so there’s no better anime to put its own spin on Dickens’ famous morality tale.

Crunchyroll Synopsis: Nenene has been invited to the awards ceremony for the Best Freshman Novelist, a competition she won several years back. Initially feeling reluctant to attend on this quiet Christmas evening, she looks at the young prizewinner and sees her old self. Cardcaptor fans will love this hilarious look at Sakura trying to decide what to get her crush for Christmas.

Crunchyroll Synopsis: Sakura got everyone Christmas presents except Yukito… It’s so hard to decide what to get someone you like that much! After some advice from Meiling, she invited Yukito to the amusement park to give him his gift. Of course, I couldn’t miss filming her romantic date, so Kero and I snuck after them.

7) Gintama, Episode 37—“People Who Say that Santa Doesn’t Really Exist Actually Want to Believe in Him / Prayer Won’t Make Your Worldly Desires Go Away! Control Yourself” Alien invasion won’t stop Santa! This is Gintama‘s hilarious take on Santa’s gargantuan task of visiting every house in a single night, with Gintoki’s reluctant help. It’s also a great introduction for first-time viewers to the cheeky fun humor of this popular show.

Crunchyroll Synopsis: On his way back from buying Nikuman one snowy night, Gintoki comes across an old man dressed in red and a reindeer arguing. Gintoki offers his help after hearing Santa complain of being unable to finish his job after his sled was destroyed. And so begins Gintoki’s night of delivering dreams to the kids. Nothing says Japan like an idol group, and this hilarious anime about a group of would-be girl band members takes time out of its busy performance schedule to celebrate Christmas the pop star way.

Crunchyroll Synopsis: The idols of 765 Production have been working nonstop, and haven’t been able to spend time as a group! Hauka and the Producer decide to fix that with an impossible task: hosting a staff Christmas Party! This episode combines two things anime is great at—karaoke and tearing your heart out. If you’re in the mood for a more poignant take on Christmas, this is an episode you won’t want to miss.

Crunchyroll Synopsis: After Taiga and Ami perform a song at the Christmas party, Taiga disappears. Ryuji goes to her apartment to let her know that she’s not alone.

10) The Pet Girl of Sakurasou, Episode 14—“The Windows and Lights of Christmas Eve” This episode drops us right into the middle of an upcoming date night between main character Sorata, his roommate Jin, and their friends Masaki and Mashiro. While it’s a fun take on christmas parties and the dizzy romance of the season, it’s also a fun romp through the confusing ins and outs of high school dating, and figuring out who it is you really love.

Crunchyroll Synopsis: Christmas Eve will be the night when truths are aired among the residents. But more than one person will have their heart broken.