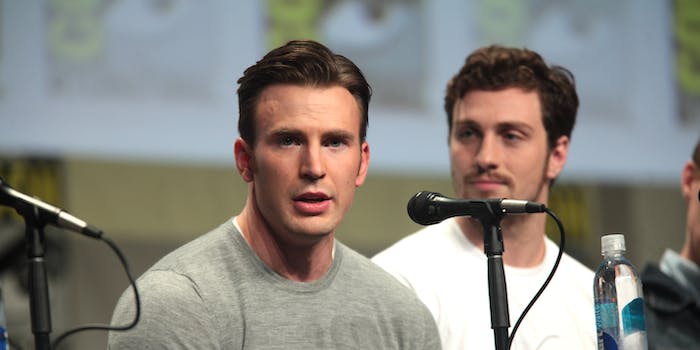 After 10 weeks apart, these two are proof that there is still pure joy in this world.

This weekend marked the conclusion of an epic story between man (Captain America star Chris Evans) and man’s best friend (a dog named Dodger.) It’s the only unequivocably good thing on Twitter, and it’s essential viewing.

Thanks to his demanding schedule of Avengers sequels, Evans has to spend a long time away from his beloved dog. That led to regular tweets like this one, which kicked off a panic about Dodger’s wellbeing.

People were so worried that Evans had to respond and confirm that his dog was fine, just far away. Thus began an international obsession with Chris Evans’ pure and adorable love for Dodger, torn asunder by Marvel Studios.

To be clear, he's alive and well, just thousands of miles away for the next couple months.

Dodger seems to live with Evans’ family while he’s away from home, so he still receives regular updates. This one is from a couple of weeks ago, eagerly anticipating Evans’ return from the Marvel set.

The dangers of playing with your food.

On Sunday, Chris Evans (and Dodger, and everyone following him on Twitter) finally got his wish. Man and dog were reunited, and obviously he posted a video.

In case you’re wondering, this is what pure happiness looks like.