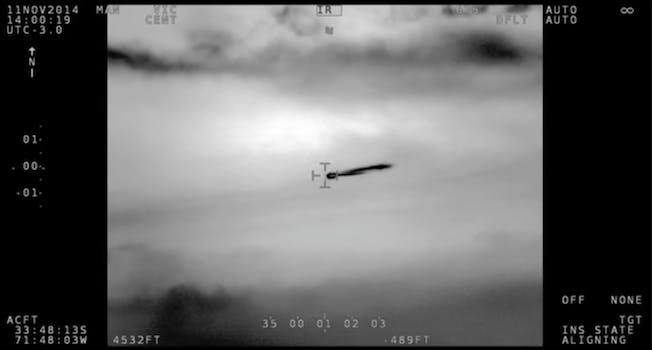 This bizarre, inexplicable UFO video has stumped the Chilean government for years

It has baffled the smartest minds in the Chilean government.

After two years of investigating an unidentified flying object in its airspace, the Chilean government has passed the footage along to the public without an explanation.

The 9-minute video was the subject of two years of scrutiny by the Comité de Estudios de Fenómenos Aéreos Anómalos [Committee for the Study of Anomalous Air Phenomena], which didn’t turn up a rational explanation.

What it was not was anything normal.

The video comes from a Chilean naval helicopter, patrolling the country’s western coast on Nov. 11, 2014.

The 9-minute video tracks an object that was flying at approximately the same 4,500-foot altitude as the helicopter, at a distance of approximately 40 miles.

The object was not picked up on any ground radar systems, and several attempts by the helicopter pilots to contact it were unsuccessful.

The most inexplicable part of the video comes about eight minutes in when the object begins to eject a lengthy plume.

“In two instances it discharged some type of gas or liquid with a high thermal track or signal,” the helicopter technician reported.

Over two years, the Chilean government contacted a number of experts, including imaging specialists, astrophysicists, aeronautical engineers, and meteorologists.

The CEFAA dismissed a number of possibilities floated, including a landing aircraft ejecting waste, weather balloons, or space junk re-entry. Although they did conclude that the object was a real, physical entity, they essentially threw their hands up for a conclusion.

“The great majority of committee members agreed to call the subject in question a UAP (Unidentified Aerial Phenomenon) due to the number of highly researched reasons that it was unanimously agreed could not explain it,” Bermúdez wrote to the Huffington Post.

This is also not the first recent UFO sighting over Chilean airspace. In 2013, miners in the northern part of the country spotted an object darting across the sky in an unusual fashion and reported the case to the CEFAA.

Experts were unable to identify that object either.