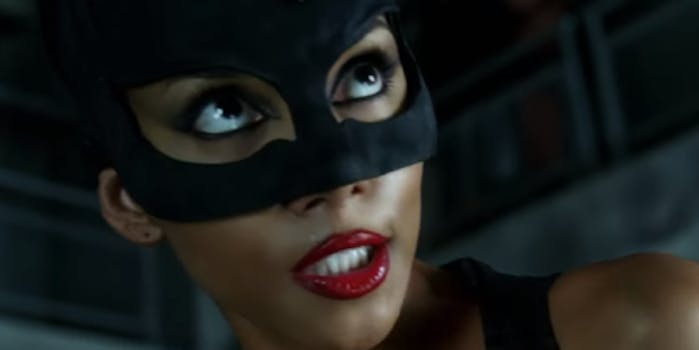 For fans of comic book-based film franchises, we’re basically living in a golden era, chock-full of high-end, splashy, expensive, and generally well-received superhero fare. It wasn’t always like this, however, and that’s a fact one particular screenwriter knows all too well. John Rogers helped write the 2004 movie Catwoman, and he admitted on Twitter on Friday that it was a “shit movie” with “zero cultural relevance.”

Catwoman got an unexpected bump into the news cycle this week, albeit briefly, thanks to former first lady Michelle Obama’s praise of Black Panther, tweeting that “young people will finally see superheroes that look like them on the big screen.”

Congrats to the entire #blackpanther team! Because of you, young people will finally see superheroes that look like them on the big screen. I loved this movie and I know it will inspire people of all backgrounds to dig deep and find the courage to be heroes of their own stories.

This led one Twitter user to wonder why such statements weren’t made when Catwoman came out, which starred Halle Berry. As Mashable’s Angie Han notes, Catwoman remains the only Marvel or DC film to feature a woman of color in the lead role.

The simple answer, according to Rogers? Catwoman was a really bad movie that few liked or remembered, and thus nobody is interested in celebrating its cultural legacy.

As one of the credited writers of CATWOMAN, I believe I have the authority to say: because it was a shit movie dumped by the studio at the end of a style cycle, and had zero cultural relevance either in front of or behind the camera.

Also full disclosure: I’ve never watched the movie all the way through in one sitting. I skipped premiere night to shoot @jenni_baird audition footage for GLOBAL FREQUENCY. And they’d fired me anyway for, y’know, snark.

It seems clear that Rogers doesn’t have many warm feelings toward his former project, and he’s definitely not alone in that regard. Catwoman is widely regarded as one of the worst comic-derived movies of all time, with an IMDB user rating of 3.3 out of 10 and a Rotten Tomatoes critical rating of just 9 percent. By way of comparison, Black Panther has been hailed by critics and audiences alike, boasting a 7.9 out of 10 IMDB rating and a 97 percent critical rating on Rotten Tomatoes.

That’s not to say that the movie has no fans, including Mick LaSalle of the San Francisco Chronicle. In a review that he might now regret, he described it as “an odd, idiosyncratic movie—dark in look and dark in spirit—that plays as a kind of pop culture investigation into the meaning of feminism and the options open to women in the modern world.”

On the other hand, one of the guys who wrote it calls it “shit,” so clearly opinions may vary.