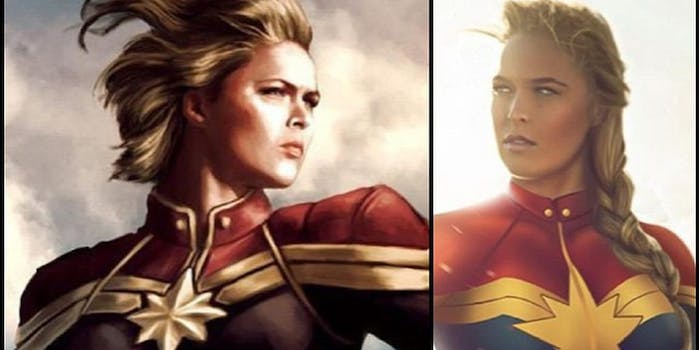 Marvel Studios chief says Captain Marvel casting is a long way off, but he sees your ideas

We won't get a casting announcement until next year.

Captain Marvel fans shouldn’t get their hopes up that Marvel will announcing the actress playing Carol Danvers any time soon.

Kevin Feige, the president of Marvel Studios, tamped down expectations that a Captain Marvel casting announcement was on the horizon in interviews this week with MTV and IGN.

Feige and producer Jeremy Latcham stressed that Marvel was focused more on crafting the perfect script for Captain Marvel, due out in 2018, from writers Meg LeFauve and Guardians of the Galaxy‘s Nicole Perlman. The studio is also still figuring out how to introduce the character in earlier films in the Marvel Cinematic Universe, setting up her solo film with exposition that comic-book newbies may need.

“There won’t be any announcements about [casting] this year,” Feige told MTV. “I think right now we’re scripting the film, figuring out who we want Carol Danvers to be, and really what the structure of the movie will be and what her part will be in some of our other Phase 3 films. And it would be next year that we start to really think about casting.”

Marvel creative executives are paying attention to fans’ casting suggestions, but Latcham made it clear that they’re judging us, too.

“We read it, we go through it, we read the comments, we look at who people like,” Latcham told MTV. “Sometimes it’s really enlightening. Sometimes it’s the exact same person that they’ve been saying over and over again that we don’t think is right. It’s always fun to kinda go through it and see what people are up to.”

Latcham’s comment suggests that we shouldn’t hold out hope for our ideal Captain Marvel, Battlestar Galactica‘s Katee Sackhoff. Despite being one of the most popular fan suggestions, Sackhoff is already 35—which Marvel might consider too old to play the part—and busy filming Longmire for Netflix.

Meanwhile, MMA wrestler Ronda Rousey made a splash earlier this year with a Reddit AMA in which she told fans that she’d like to play Danvers. She was promptly bombarded with fanart of herself as Captain Marvel. Feige revealed to IGN he saw that campaign, too.

“I love it,” he told IGN, adding that he saw such campaigns as “a testament to how great the characters are that it appeals to such a wide range of talented, talented people.”

It’s likely that neither Sackhoff or Rousey will end up on the real shortlist—after all, Feige said that executives wouldn’t be getting serious about casting until next year, and a lot can change in a few months.

In the meantime, Tumblr is teeming with inspirational fancastings for the role, from Julia Jones to Natalie Dormer to Pink. But as badass as all of these women would be in the role, they’re still no match for our favorite fancast yet: this kitten in the role of Carol Danvers’ cat Chewie.