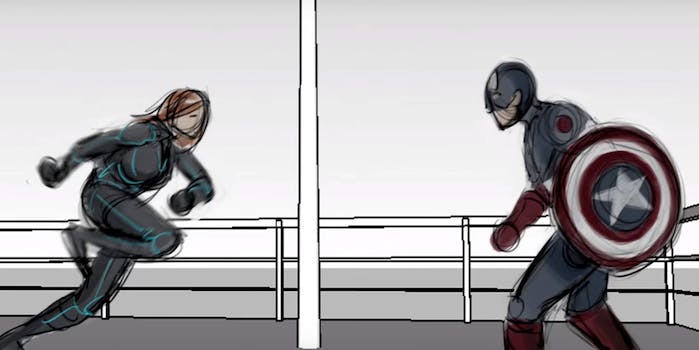 A Marvel artist is sharing his work on 'Captain America: Civil War', including cut content.

Captain America: Civil War was packed with fight scenes pitting Avenger against Avenger, but in the end, Black Widow and Steve Rogers never went head-to-head. Thankfully, we can now see how that fight might have looked in an animated storyboard from the film’s production process.

Marvel storyboard artist Darrin Denlinger has been posting a few of these videos on YouTube, including an 11-minute sequence from Team Cap’s arrest in Berlin.

One of the clips takes place during the airport battle sequence, depicting a showdown between Black Widow and Captain America.

After Steve and Natasha’s unexpected friendship in Captain America: The Winter Soldier, it would have been interesting to see this confrontation go down. But we have to agree that Civil War included more than enough fight scenes already.