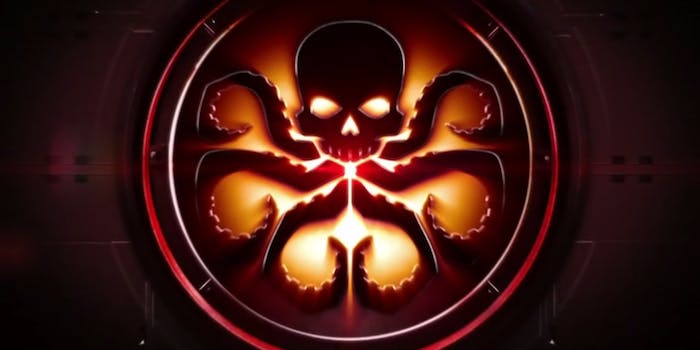 It took 17 episodes, but Marvel’s Agents of S.H.I.E.L.D. is finally the show we wanted.

It took 17 episodes, but Marvel’s Agents of S.H.I.E.L.D. is finally the show we were all hoping it would be in the first place.

It’s no secret that many fans were disappointed by the show’s early episodes, complaining about simplistic villain-of-the-week storylines and bland characterization. Agents of S.H.I.E.L.D. began to turn around after a couple of months, but nothing could’ve prepared its audience for this week’s tie-in with Captain America: The Winter Soldier, during which (spoiler alert!) the entire S.H.I.E.L.D. organization was gutted by hundreds of HYDRA sleeper agents.

Imagine a TV series about the janitorial staff at the Death Star, all leading up to the realization that they’d been working for the bad guys all along. That’s basically what happened in this week’s episode, complete with the equivalent of Luke Skywalker blowing everything up at the end.

Right now, it seems almost as if AoS had been lulling us all into a false sense of security, just like HYDRA. The biggest coup was the revelation that Agent Ward, i.e. the handsomest block of wood on television, was a HYDRA spy. This couldn’t have come at a better time because not only did it completely obliterate the developing romance between Ward and his protege Skye, but it’s a genuinely shocking twist from a show that many viewers complained was painfully predictable.

Out of the shadows. Into the light. #HailHydra

Ward was a divisive character among AoS fans. Many people were hooked on his will-they/won’t-they relationship with Skye, but others felt that even after the show began to improve, Ward was the weak link. Until this week, he never seemed to develop much past the chiseled action hero we saw in the pilot episode, so from a critical perspective it’s kind of a relief to discover that he was secretly a traitor.

Of course, some fans are still convinced that he’s some kind of triple agent, despite the fact that we saw him murder several S.H.I.E.L.D. agents and free a supervillain from custody. “Yes, it looks bad, but are we going to forget everything Ward has done for his team?” wrote AoS fan thedoctorofdistricttwelve on Tumblr. “He took a beating for May, risked his life for Fitz, jumped out of an airplane for Simmons, went off grid to find Coulson, killed and put his own life at stake for Skye. He loves his team. He wouldn’t betray them. There is absolutely no way Grant Ward is a Hydra agent.”

And, as Tumblr user dreamsleepfangirl points out, who’s to say that Ward wasn’t brainwashed by HYDRA? “WHAT IF WHEN WARD WAS FIGHTING THOSE GUYS AND ALL WE SAW WAS SKYE LISTENING THEY INJECTED HIM WITH SOMETHING? HIS LOOK WAS PRETTY BLANK AT THE END.”

So, was that blank look because Ward is a coldblooded killer? Or was it because he was being mind-controlled? The truth is that we have no way of knowing, which is more than you could say for the unfortunately predictable storylines of the first six or seven episodes.

The main argument against the mind-control theory isn’t anything to do with Ward himself, but the fact that this idea has already been explored several times. The Winter Soldier and Hawkeye were victims of brainwashing in high-profile Marvel movies, and Agents of S.H.I.E.L.D. character Mike Peterson has spent the past few episodes being controlled by the mysterious Clairvoyant. Telling the same story for a fourth time, particularly with yet another action hero character like Ward, would definitely be pushing the limit.

This immediate influx of Ward-related conspiracy theories is a testament to AoS’s ability to pull the wool over our eyes. As one of the characters pointed out, the reason why HYDRA was able to infiltrate S.H.I.E.L.D. is because its operatives felt trustworthy. After an entire season of getting to know and love characters like Ward, Skye, and Melinda May, the audience was dumped into a scenario where literally anyone could be a bad guy, and believably so. It was as if we’d all spent the past six months getting invested in an upbeat procedural crime drama, only to discover that the police department was secretly run by terrorists and half the main characters had been covering up double lives as serial killers.

When Agents of S.H.I.E.L.D. was first announced, Marvel fans hoped it would do two things: provide a look at the “normal” characters who pick up the pieces after the latest superhero battle, and explore the Marvel Cinematic Universe in a way that felt more like episodic comicbook storylines. This week it not only did both of those things, but its season-wide arc neatly locked into place with the dramatic events of Captain America: The Winter Soldier without ever having to put Nick Fury or Captain America onscreen.

The only problem here is that Agents of S.H.I.E.L.D. may have held out for too long. Ratings have been dropping since day one, and that’s partly due to Marvel fans losing interest. The earlier episodes seemed too generic and disconnected from the wider Marvel universe. It’s not in danger of cancellation quite yet, but this week’s Winter Soldier tie-in may have missed out on the very audience the show was trying to hook in the first place.

Oh, and one final thing. A lot of people are attributing things like Ward’s defection to a “classic Joss Whedon twist,” which isn’t exactly accurate. Agents of S.H.I.E.L.D. may be produced (and in the case of this week’s episode, co-written) by Whedon’s brother Jed and his wife Maurissa Tancharoen, but Joss himself was only ever involved in the first episode. So while he obviously has influence in his capacity as the director of the Avengers movies, Joss Whedon isn’t actually in charge of S.H.I.E.L.D.

This show suffered from early (and probably unfair) comparisons to Buffy and Dollhouse, but if anything, its latest episodes have proven that it can strike out on its own, independent from Whedonverse expectations.