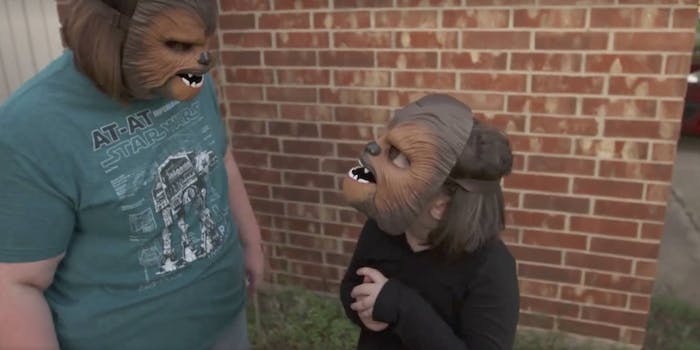 The Chewbacca lady is living her best life right now

The viral video strikes back.

From the lush forests of Kashyyyk to the great state of Texas, everyone loves Chewbacca. The giant, heroic furball from the Star Wars universe has been a fan favorite for generations, but no one has ever gotten nearly as much enjoyment out of Han Solo’s sidekick as Candace Payne.

Earlier this week, Payne became an Internet sensation when a Facebook Live video of the Texas mom unboxing a talking Chewbacca mask, putting it on in her car, and then laughing hysterically went massively viral.

The video, which has been viewed upwards of 100 million times in less than 72 hours, is the single most-watched thing in the short history of the Facebook Live platform. It is as pure an expression of sincere, uncomplicated joy that exists anywhere online. As with every other expression of sincere, uncomplicated joy that exist online, #brands be thirstier than Tatooine without moisture farms.

Payne bought her Chewbacca mask from the department store Kohl’s. While she said she’d let her kids play with it, she insisted the mask belonged to her. In a follow-up video posted by Kohl’s corporate Facebook account, a company representative showed up at Payne’s house to deliver a veritable mountain of Star Wars swag so everyone in Payne’s family could join in on the fun.

The company also gave Payne $2,500 in Kohl’s gift cards as a way to say thanks for giving Kohl’s its best publicity bump in maybe ever.

The only person more excited about Payne’s video than Kohl’s marketing department was probably the actor who played Chewbacca, Peter Mayhew.

"I'm such a happy chewbacca.." This lady is still making me smile. Lovely video to come out on my birthday :) pic.twitter.com/khUizi6nFf