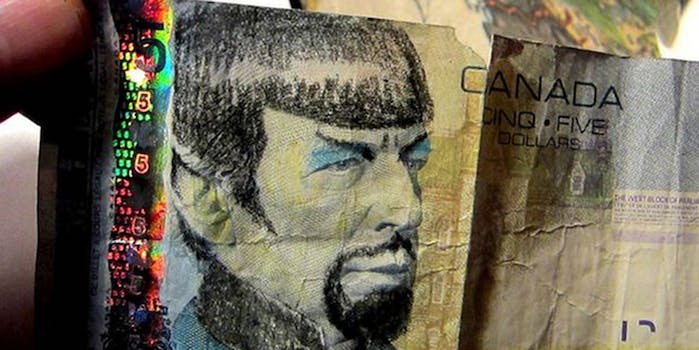 They're essentially paying $5 to memorialize Spock. Live long and devalue.

Since the death of Leonard Nimoy, the Internet has exploded in an outpouring of fan art and memorial tributes. But Canadians (of course) have found the oddest way of paying tribute to everyone’s favorite Vulcan.

It’s called “Spocking,” and it involves morphing the image of former Canadian prime minister Wilfrid Laurier—whose face is found on the country’s currency—into the iconic visage of Star Trek‘s Spock.

It may not be totally legal, but Canadians are starting to “Spock” their $5 bills. http://t.co/vWMEtu9txz pic.twitter.com/DSuQ86Hr8e

The trend has become so popular that the Bank of Canada on Monday promised that the currency defacement wouldn’t be considered illegal.

Bank spokesperson Josianne Menard told CBC News that defacing the currency isn’t against the law. At worst, she said, retailers might refuse to accept the bill and the money just might fall out of circulation.

We can’t imagine anyone not accepting a Live Long and Prosper dollar, but we can easily imagine the bills winding up in a fan’s scrapbook instead of serving their intended purpose. And were that to happen, we wouldn’t blame the collector in question.

The trend of turning the $5 bill into an image of Spock has long circulated in Canada as a bar trick. But since Nimoy’s death, the amount of publicity given to the fad has turned it into something that (of course) Americans are trying to outdo:

Of course our US cousins don't have the benefit of Laurier on their 5s, so they've developed this #spocking variant. pic.twitter.com/ViazVuYt7f

I for one will not be outdone by the canadians! #spock #spocking #livelongandprosper #nimoy

But even though the currency fan art isn’t illegal, it’s not exactly being given the thumbs-up. Menard later said in a statement released by media outlet Wenn that it was a bad idea for security, and, worse, a matter of national pride:

It is not illegal to write or make other markings on bank notes… However, there are important reasons why it should not be done. Writing on a bank note may interfere with the security features and reduces its lifespan. Markings on a note may also prevent it from being accepted in a transaction. Furthermore, the Bank of Canada feels that writing and markings on bank notes are inappropriate as they are a symbol of our country and a source of national pride.

There you have it. Live long and devalue, Canada.