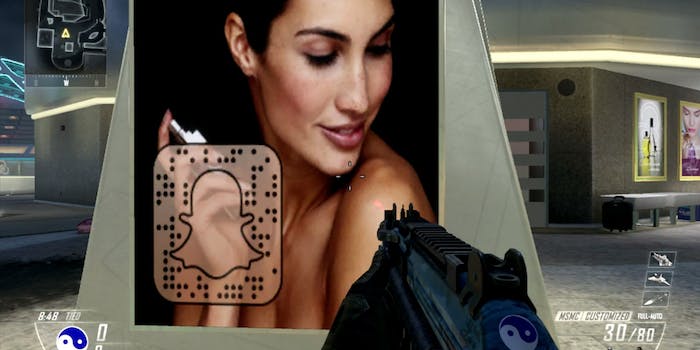 Could this mysterious Snapchat ad be hinting at a new Call of Duty game?

A new update points to a viral marketing campaign—on Snapchat.

A tiny update to Call of Duty: Black Ops 2 includes the kernel for what might be a viral ad campaign for the next Call of Duty game.

YouTuber Drift0r was playing a multiplayer match in Black Ops 2, following an update to the game, and noticed that one of the poster advertisements in the level was something he’d never seen before. Investigation of another, different level turned up the same advertisement. Printed on the ad is a Snapchat ghost, which is like a QR code for Snapchat users to add new friends.

The new Snapchat ghost in Black Ops 2 led to the Call of Duty Snapchat account and the following snippet of video:

Because, you know. The Snapchat logo is a ghost. Also, people loved Riley the Dog in Call of Duty: Ghosts. Maybe Riley needs some more time in the spotlight.

H/T The Verge/ Screengrab via Drift0r/YouTube