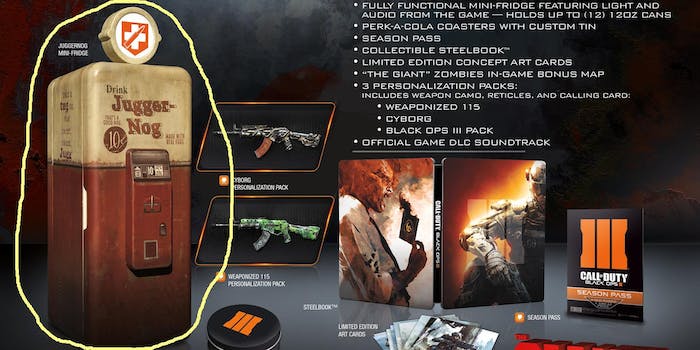 Image via mightyape.co.nz/Remix by Joey Keeton

The bundle for the zombie-themed game is really going all-out.

By now, we’re quite familiar with collectors’ editions of games that include stuff like booklets, tins, stickers, photos, and free downloads. But the makers of Call of Duty have gone one step further with the collector’s bundle for Call of Duty: Black Ops III.

The bundle, expected to be released on Nov. 6, will include a fully functional mini-fridge modeled after the in-game item.

Details about the fridge are scarce; all we know about its size is that it can hold a 12-pack of soda. We do know that Activision and Treyarch, Call of Duty‘s developers, included working lights and sounds as seen in the game.

The bundle is priced at approximately $199, which, while on the expensive side, is really not too bad for such a cool, working replica of the in-game mini-fridge.

As an extra bonus, the mini-fridge bundle also includes the game itself, plus the zombies bonus map! When you do the math, that comes out to be a pretty good deal.