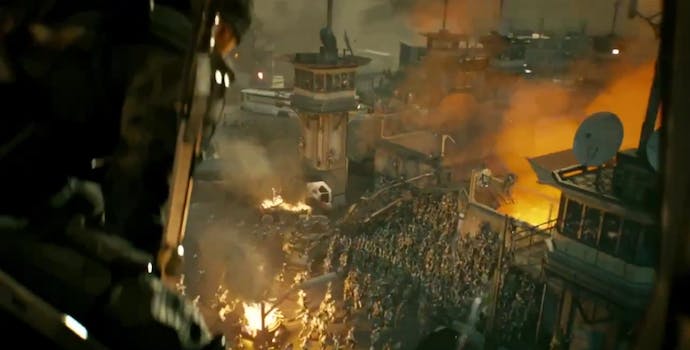 Is there a zombie mode in the new Call of Duty?

Call of Duty players are hoping for more than a bonus level to get their zombie fix.

You’re running like hell from the swarm of flesh-eaters jumping over the walls, even though wearing an Exo suit makes you a virtual superhero, y. Could this be part of your next Call of Duty experience?

Rumors went around in mid-October about the possible inclusion of a zombie mode in Call of Duty: Advanced Warfare, based on a leak of one of the game’s Achievements. Redditors have been passing around links to what looks like a cinematic at the final level of the game’s co-op Survivor mode, as well as some captured gameplay footage from the zombie battle itself. Activision is taking the videos down as quickly as fans are getting them posted back up.

The leaked cinematic and gameplay footage feature not shambler-type Romero zombies, but runners and jumpers like we saw in last year’s film adaptation of Day Z.

If the leak about the zombie-related Achievement in Advanced Warfare is correct, the leaked info more likely does portend a bonus level, rather than a full-on zombie mode. It would be a nice setup for the future release of zombie-themed downloadable content for Advanced Warfare, because Call of Duty players can’t get enough of this stuff.

Nazi Zombies, or Nacht der Untoten if you prefer, was a bonus, co-op survival mode included with Call of Duty: World at War, released in 2008. There was no story, just a World War II-era bunker with windows that players could board up and period-appropriate weapons they could purchase with credits earned from holding off the zombie horde.

The mode was so popular that it spawned its own fiction and self-contained game universe, with running installments of co-op zombie survival modes in Call of Duty: Black Ops released in 2010, and Call of Duty: Black Ops II released in 2012. Groups of survivors battled zombies in different time periods, including the Cold War-era Pentagon, in a story about time travel and Nazi plots involving scientific research into the undead.

Call of Duty zombie modes are so beloved that some people will buy a Call of Duty game strictly for the zombies. The leak of this cinematic and footage could work either way for Activision. If this is effectively a reveal of an entire zombie mode in Advanced Warfare, and Activision cops to it, the revelation could inspire additional sales from fence-sitters.

Another argument for this only being a bonus level, however, is that Activision did not advertise it, considering the potential for such a mode to drive ever-important day one sales of Advanced Warfare. If the inclusion of zombies does turn out to be only a single, bonus wave in the game’s Exo-Survival mode, the same fence-sitters might decide to skip the game.

Either way, this was a nice Halloween-themed treat for Call of Duty fans. We’ve reached out to Activision for comment.

Call of Duty: Advanced Warfare will be released for PC, PlayStation 3, PlayStation 4, Xbox 360, and Xbox One on Nov. 3.