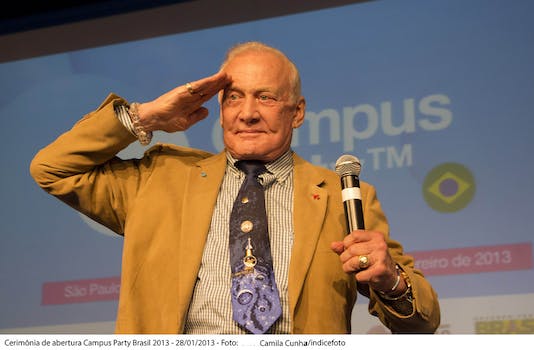 America's favorite astronaut is as chatty as ever.

Dr. Buzz Aldrin may not have been the first person to walk on the moon, but he’s far and away the coolest (at least, when he’s not downplaying the human factors in climate change). Yesterday, Aldrin returned to Reddit for an encore AMA that touched on Mars colonization, alien life, and his plans for Halloween.

Here’s his description of stargazing on the lunar surface:

Does he think there’s life on other planets?

As Carl Sagan noted, “extraordinary claims require extraordinary evidence.” Personally, I strongly believe life forms exist with some abundance throughout the universe. But the tremendous distances involved in the immenseness of the universe make discovery problematic in the near future, and visits by either us or them extremely improbable.

And will robots help us get to Mars?

I have a particular interest in Moon Express because my younger son is the president! I am hoping we can develop the large fuel capacity of their spacecraft to depart earth and head at Mars on July 4th, 2019, and land on the moon Phobos. That’s the 50th anniversary of the first landing on the Moon, and to demonstrate a private enterprise moon landing, to be able to be a precursor demonstration during a significant historical anniversary, might be used to commit to American-led permanence on Mars within 2 decades. The Moon Express is a non-human mission, of course, but it is leading the way. I think that time exploring and further investigative missions of Mars might stimulate human occupation and return. Human occupation, lengthy surveys of essential landing sites, and returns. This might include a non-human but very humanlike robot that needs to be fed – probably oil, haha! And electricity.

When asked whether he’d hung out with Russia’s famous cosmonauts:

I, like many others, would have liked to have met Yuri Gagarin, but I did enjoy presenting an award – an Explorer’s Club award – to Valentina Tereshkova after having hosted two cosmonauts Andriyan Nikolayev and Vitaly Sevastyanov, and of course everyone enjoys the boisterous overbearing humor of Alexey Leonov.

Whether it was more satisfying to fly to the moon or punch the guy who said he hadn’t:

Both created considerable, favorable support of my activities. However, one involved the relationship between human beings, and the other a historic giant leap for mankind.

And whether he’ll ever collaborate with Snoop Dogg as “Doc Rendezvous” again:

I am presently engaged in a search for the lyrics of “Get your Butt to Mars.” Somebody is going to make a lot of money with the next version of Frank Sinatra’s “Fly Me to the Moon!” My rap will be outmoded by then.

Reading my email and the newspaper in bed, having breakfast. However, I do walk rapidly through the airport!

As does his favorite food:

Hot coffee for the first time in space. It wasn’t Tang. But the mini-shrimp were edible when squeezed through the plastic bag!

Aldrin also called Voyager 1’s departure from our solar system “a cardinal achievement in the progress of humankind outward,” revealed that he had “just put out a request for a Buzz Lightyear mask/headpiece” so he could be properly costumed this evening, admitted that he’s not very good at Pac-Man, and said he was looking forward to Interstellar, Christopher Nolan’s hotly anticipated film about space travel.

All great stuff from a real-life American hero—we’d say he’s more than earned the right to yell at whichever celestial body he likes.