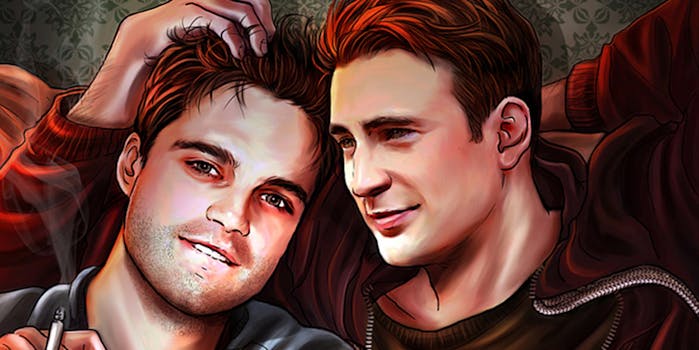 The Avengers are perfect for social-media-based fanfiction.

Fanfiction and art about the Avengers franchise often incorporates social media. This actually makes a surprising amount of sense. With Tony Stark as a celebrity entrepreneur and Captain America as a propaganda icon, the Marvel Cinematic Universe has made a serious effort to ground its movies in the real world.

Superheroes like Spider-Man and Batman are similarly public figures, but their stories are more self-contained, having relatively little impact on society as a whole. Meanwhile in the Avengers franchise, we tend to see a lot more about the way the outside world reacts to the appearance of superheroes. (And, of course, it helps that none of the Avengers have secret identities.)

The two Captain America movies may be the best example, since Steve Rogers starts off as what basically amounts to a living advertisement for American patriotism during World War II, performing alongside USO girls. Once he reaches the 21st century, things take a darker tone when (spoiler alert) all of S.H.I.E.L.D.’s secret files are posted online in an Edward Snowden-esque leak and immediately start trending on Twitter.

It’s no surprise that Avengers fanfic is full of stories where Tony Stark goes on The Daily Show, or Hawkeye has a Vine account with which he pranks the other Avengers. One popular fanartist has taken this a step further, creating an Instagram account for Bucky Barnes wherein he catalogues his new life in the 21st century.

First pic after I surrendered to S.H.I.E.L.D 2,3 years ago. I was later transferred to D.C for a full debriefing. #buckybarnes #sebastianstan #stucky #new #art #captainamerica #thewintersoldier


The_life_of_bucky_barnes focuses on a popular topic in Captain America fandom: the relationship between Bucky Barnes and Steve Rogers. Their friendship is one of the central facets of the Captain America franchise, particularly after Barnes returned from the dead as the brainwashed Winter Soldier in the most recent movie.

This Instagram account begins about three years after Captain America: The Winter Soldier, with Barnes having mostly recovered from his time with HYDRA and on the run. Also, he and Rogers are dating and take lots of cute selfies together.

Created by illustrator and fanartist Petite Madame, the Life of Bucky Barnes Instagram is a cool glimpse into an ongoing story in Marvel fandom, and definitely one to follow if you don’t have time to read lengthy fanfic.