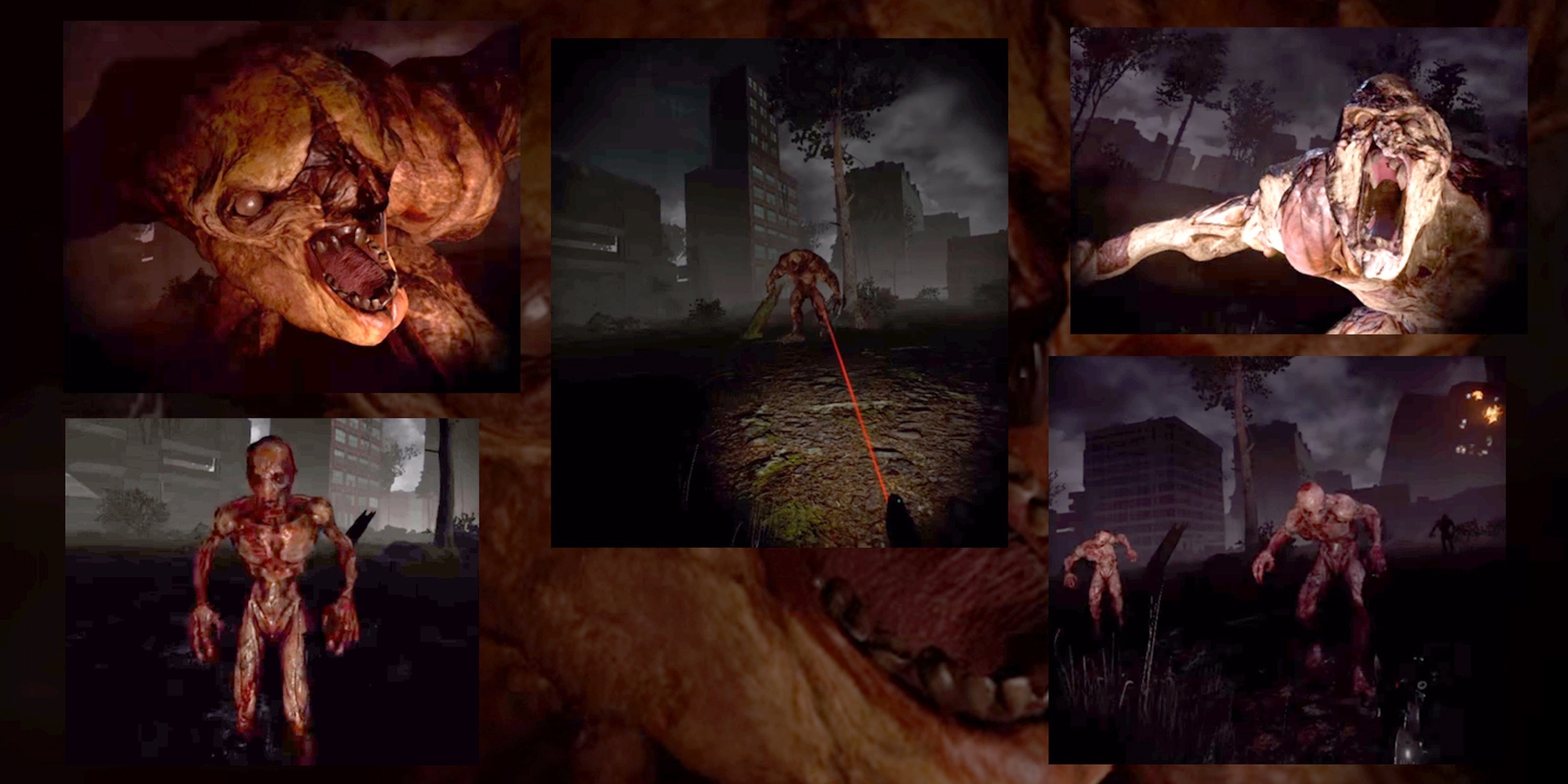 Virtual reality game developers need to be very careful about how they employ horror.

The unholy, skinless, bloody creatures shambled toward me on all sides. My pistol was pitifully inadequate. For the first time ever, I pulled a VR rig off my head in the middle of a demo.

Not even extreme nausea had caused me to do so before Thursday, when I demoed the HTC Vive game The Brookhaven Experiment at Valve Software’s booth at the 2016 Game Developers Conference. I’d always choked down the bile and forced myself to finish the demo rather than bail, even though this is almost always a bad decision. Call it stupid gamer pride.

The Brookhaven Experiment is what happens when Resident Evil is ported into VR. I had known in advance that I was about to play a survival horror game. I had not known that this would result in my actually fearing for my life, because it was the first survival horror game I’d played on the Vive.

I also had not known that in these horrifying circumstances I’d also be denied the expression of either of the two primordial, human responses to fear, namely to fight or flee.

I could not fight because the weapon I was given, a 12-round pistol, was laughingly inadequate to the task. I could not flee because even if we joke about the Vive being the next best thing to a holodeck, it doesn’t provide pure freedom of movement. There are still walls to run into.

I’ve played enough games to know a no-win situation when I see one. There were five or six monsters all around me. There was no way I was going to pull off as many headshots as rapidly as I needed to before I was dead meat.

Not wanting to see what happened when one of the pink, bloody creatures got any closer I took the Vive off, handed it to game developer Jeremy Chapman, and said, “I am all set with that.”

I was also angry, but on account of the game accomplishing precisely what it was supposed to accomplish: It scared the ever-living shit out of me.

I’ve been scared before in VR: The first time I demoed the Vive, one year ago at Valve Software’s GDC 2015 booth. In the section of the demo that took place in Aperture Science from the Portal games, I felt my stomach sink when I laid eyes on the malevolent AI named GLaDOS towering above me.

A year later, after setting up a Vive system in my living room, I played through the same demo. I knew I’d be seeing GLaDOS in there eventually. It was 4am and I was exhausted, so maybe that explains my reaction, but when I turned around and saw GLaDOS again I yelled out “Oh my God!” at the top of my lungs because now she was in my living room.

It wasn’t merely the fact that Brookhaven had scared me that pissed me off. It was partly because I hadn’t been warned prior to going into the demo just how frightening the experience would be.

VR only works if the player’s mind is tricked into thinking the experience is real. And I understand that a horror game dev might be reticent to explain to the player just how terrifying their game is before the player has tried the game for themselves.

But VR games aren’t regular video games. They play off an entirely different set of human cognitive functions. The only way Brookhaven works as an effective experience is if you genuinely feel afraid for your life, and then “the fun” is whether or not you can fight that fear, maintain your composure, and pull off the careful shooting required to stay alive.

That’s the kind of thing you might want to warn a player about even at the risk of ruining part of the illusion—especially in these very early days of VR where no one’s seen anything like what you’re about to show them. When their brain has never had to process the kind of sensory information you’re about to throw at it.

After all, who’s been forced to stand practically still while skinless monsters shamble toward them?

Steve Bowler, the other half of the Brookhaven development team, said that he and Chapman had made some very recent changes to the Brookhaven demo that had previously been available on Steam. They wanted something new to show GDC 2016 attendees.

Chapman said that as a result, they hadn’t been able to tutorialize the new content, i.e. to slowly move the player through all the requisite lessons they’d need to survive the game.

Fair enough. VR developers don’t get many opportunities to show their projects off to large numbers of people in quick succession. Wanting to show new material and not having time to polish it up is something I can accept.

The other reason I was angry, however, is because the game didn’t feel fair. The first thing I said when I took the Vive off and handed it to Chapman was that I couldn’t handle the game as is with only a pistol. I needed a shotgun, or an assault rifle—something, anything better than the pea-shooter I’d been given.

Chapman explained that they’d experimented with shotguns, but didn’t like how fake it felt to pump a shotgun chamber in VR. I personally agree with that assessment, after reflecting on my experience with Bullet Train at Oculus Connect 2 last September.

He then asked whether I had experience firing guns in the real world, because apparently people who know how to shoot guns in real life do better in Brookhaven than people who don’t, because Brookhaven adheres to real-world physics and provides no aim assist.

That’s fine and all, but it’s also something to warn the player about before you put him or her into a game that triggers the fight or flight reaction. If they have to fight, you make sure they have the ability to defend themselves. Especially if, when you shoot at and miss some of the monsters, they break into a dead run straight towards you.

What followed was a short conversation about how Brookhaven isn’t for everyone, which of course is correct. I would never suggest that all games need to be all things to all people. There lies the path to creative death and extreme boredom. I like it when games know their audience and play to them explicitly.

And I told Chapman that I didn’t want him to take my bailing on the demo as criticism of the game. It was actually, I told him, the highest praise I could give Brookhaven for accomplishing what the developers intended. He thankfully said that’s precisely how he took my reaction.

My experience with Brookhaven also taught me something about the realities of trying to demo VR software.

At most video game events, the idea is to get as many people through the line, into the game, and out the back door as rapidly as possible. You’re trying to create impressions and buzz. You want as many people as you can to be talking about your game, and that means demo volume.

I think this may be the worst possible model for VR demos. Even if there had been a tutorial for Brookhaven, it would have eaten up a substantial amount of my 15-minute demo. None of the Vive demos I’ve tried at GDC, in fact, had tutorials. An observer with a microphone served as a de facto tutorial guide by talking you through the experience—which ironically breaks the illusion because someone is chattering at you through your headphones.

I don’t know how companies are going to get around this fundamental challenge with providing adequate demos of VR technology.

It’s going to be a long time before the average person has had enough experience with VR that they can acclimate themselves to different types of experiences very quickly after putting on a rig. Even experienced game developers aren’t used to VR yet, and the technology has been floating around at gaming events for years.

That means people need to spend real time in new VR experiences to get a good impression. I’ll have access to the Brookhaven demo when I get home. I’ll have time to desensitize myself to the fight or flight reaction, to get used to the shooting mechanics, and will then get to have some fun with the game.

Now imagine the person who had a similar experience with the Brookhaven demo and doesn’t have the opportunity to go home and try the game again. Maybe they swear off VR horror games for a while or entirely. And in the early days of VR, no developer can afford someone to walk away with that idea in their heads that they’re not going to try VR again.