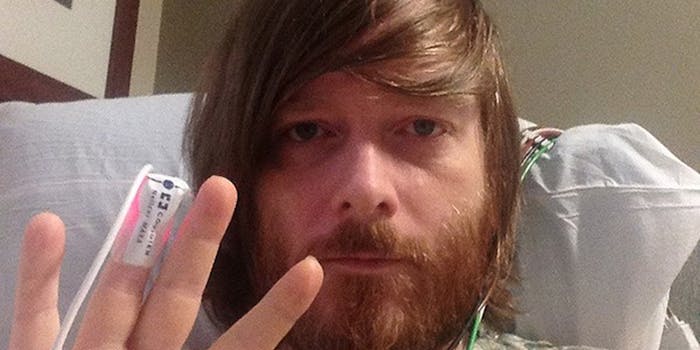 Brandon Boyer's insurance company failed him. But his fans didn't.

Boyer immediately went for surgery. But earlier this year he hit a roadblock. Thanks to a loophole in his insurance policy, which said that any signs of illness that could possibly have led to a diagnosis is cause for denial, the insurance company refused his  $110,000 in claims. He was left up to his neck in medical bills.

Humana, the insurance company did send him a chocolate bar as an apology for “a service experience” that may not have met his expectations, however.

Left in a difficult position, Boyer started a cancer treatment relief fund on GoFundMe. As of this moment, it has been tweeted about more than 4,800 times and has been shared on Facebook over 1,600 times. His target goal might seem impossible at first glance; $110, 000 is a lot to ask from the Internet. But in the last four days, Boyer is already there, with $108,000. And the number just keeps rising.

In many ways, this outpouring of love and support by everyone from Mojang’s Markus “Notch” Persson to Journey creatorsthatgamecompany is a by-product of Boyer’s contributions to the indie game scene. While not all of his efforts might be readily obvious, Boyer has been instrumental in making many popular indie games and developers what they are today.

But while Boyer’s crowdfunding campaign might be inching towards success, his situation is frighteningly common. Horror stories about the American health care system abound everywhere. Had Boyer been diagnosed with cancer this year, he would have been covered under the Obama administration’s Affordable Care Act. But he was not. Fortunately, Boyer has something to help: The love of an entire industry.