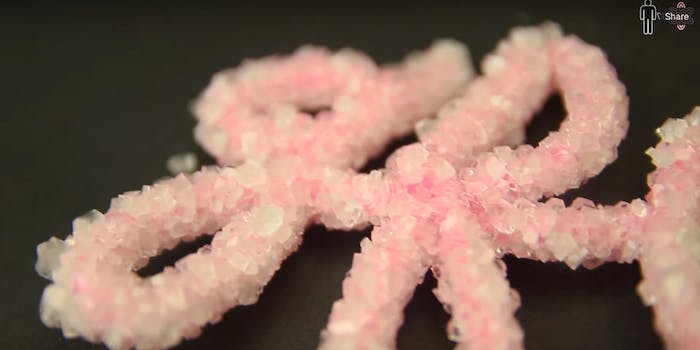 Here’s an awesome crystal experiment—and how it works

The husband-and-wife team at the YouTube channel Threadbanger have several Pinterest-based series. But occasionally, host Rob Czar takes on your childhood science experiments in Man vs. Science.

Recently, he made Borax crystals, with uncharacteristic success:

But science is always more fun when you understand the why along with the how. So here’s the why:

Making crystals, be they of Borax or other chemicals, basically involves creating a “supersaturated” solution. The goal is to dissolve more of one compound into another than you normally could—usually by using heat. For Borax crystals, you accomplish this by dissolving a lot of Borax in hot water: The heat of the water allows for more borax to dissolve than it would in cold or room temperature water.

As the water cools back down, the Borax comes out of the solution and sticks together in the form of crystals. The pipe cleaners, in this case, provide a place for those crystals to form and hold. You can make rock candy the same way by using sugar instead of Borax.

According to Scientific American, you can also change the type of crystals you get by changing how fast you let the mixture cool. Cooling it more slowly means you will get more pure crystals, since the molecules come together slowly and will push out any impurities in the solution. But if you cool the mixture quickly by putting it in an ice bath, then you’ll get more impurities in the crystals, which will make them take on a different shape.

The best part is this experiment is easy to do at home. Borax can be found in the laundry aisle, but you can also get the same results using sugar, table salt, or epsom salt.