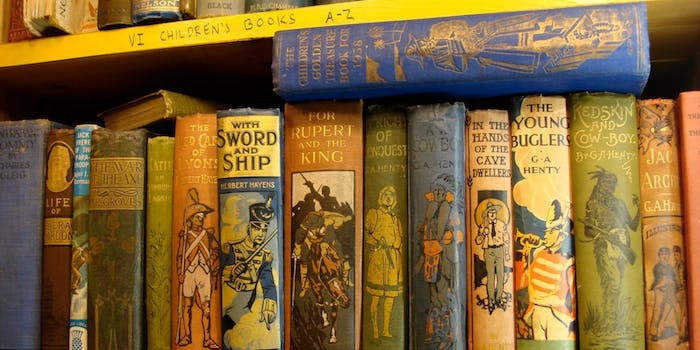 John Green joins Twitter battle against whitewashing and the John Green Effect at the publishing industry's most important yearly event.

Despite the Internet’s constant, full-volume conversation about the need to acknowledge increased diversity in genre literature, some members of the publishing industry remain strikingly oblivious to all the noise.

Now, a branch of the publishing industry’s biggest annual convention has enraged the online community of readers and book bloggers with its inexplicable guest lineup for its most public event.

Involved in the fray is Vlogbrother and acclaimed author John Green, who seems to be trying his best to be part of the solution and not part of the problem.

Book Expo America is the publishing industry’s juggernaut event, an annual spring conference housed at the Javits Center in New York each May that draws thousands of publishers, writers, and readers. BEA has several sub-events, including an entire day of events open to the general public. This day, newly rebranded from the previous Power Reader Day, is Book Con. As BEA’s ambassador event for book consumers, Book Con purports to bring readers and creators together for a celebration of books in pop culture, and boasts numerous celebrities, entertainers, and writers.

There’s just one little catch: every last one of those creators is white.

It’s a brazen lineup that has caused a maelstrom of ongoing anger from the book blogosphere.

Not only is Book Con’s entire celebrity lineup made up of white people, but to add insult to injury, it comes after the con previously announced a “kid lit” panel made up entirely of all middle-aged white male writers. Children’s and YA literature is a genre heavily dominated and spearheaded by women. Even one of the men on the panel was boggled:

Not privy to the whole scope of programming — hopefully more diverse — but that one panel should be named “Four White Dudes of Kids’ Lit.”

The con wound up apologizing for the resulting backlash earlier this month, and had many hopeful that it was sincere about listening and correcting the mistakes it was making regarding the lack of diversity in its programming.

Instead, Book Con came back with a celebrity guest lineup that included 18 white men, 12 white women, and Grumpy Cat. Not exactly the “forward-thinking content” they promised.

This isn’t a mistake. It isn’t an oversight. It is an overt statement of Book Expo America’s values, and apparently, giving writers of color attention and a platform and access to readers is not one.

This utter lack of diversity is gross. It is inexcusable. And it is really, really embarrassing. Book Expo America is the industry’s flagship event, and the statement it is making on the industry’s behalf is that we believe that what readers—the kind of devoted, passionate readers who fork over thirty dollars to spend a summer Saturday in a convention center—want out of a book event is an all-white, heavily celebrity line-up.

Galvanized by the notable silence from Book Con’s official channels, writer Ellen Oh created the social media project #WeNeedDiverseBooks, intended to serve as a community-wide response to BEA and Book Con and provide a visible reminder of the importance of diversity in publishing. Though the project isn’t scheduled to start until May 1, the hashtag is already blowing up Twitter.

Re: @thebookcon We hear & respect your voices. We are continuing work to build content that is diverse & awesome. Statement and actions soon

Fensterman also responded to Joines-Schinsky via email, which she posted at Book Riot:

We have heard the concerns and feedback about the current show lineup and are working on making this better. As the show’s producers, we are continuing to create content for BookCon right up to the show, and many more panels are on the way. We don’t want to make promises or statements that will at this point seem self-serving or sound like tokenism though. That’s not what we believe in or intend to do. In fact diversity in our content has always been important to us, however we know that the first announcements of programming have not reflected that commitment to and belief in diversity, that’s our error and one we are eager to correct. But we are not scrabbling to fix this because we have to. Instead we are continuing to create great content with this input and feedback at the very front of our minds to show our commitment to a compelling, diverse lineup of content that readers will love. We hope to have some announcements soon that will reflect this desire.

This response made many readers and bloggers angrier. After all, if the community’s diversity were respected all that greatly, why make a whitewashed guest list and an all-male panel to begin with? And how can members of the book blogosphere deliver the message to the publishing community about the importance of including diverse voices?

Enter John Green. His acclaimed novel The Fault in Our Stars has gotten gushing thumbs-up from everyone from the New York Times to Time magazine, which named it the best book of 2012. Green and TFIOS are Book Con’s headlining stars.

Although Green himself isn’t on the Kid Lit panel that initially caused so much controversy, the panel seems like a pretty blatant examples of a problem that members of the book blogosphere have dubbed “the John Green Effect.” The John Green Effect isn’t actually about John Green himself, or even the merit of his books. Though the catchphrase is new, the concept it describes has been with us for centuries: the many ways in which women are marginalized and their contributions minimalized in publishing.

The John Green effect describes the pattern wherein mainstream reviewers and bestseller lists promote the idea that Young Adult literature, with its long purview of acclaimed and influential writers like Laurie Halse Anderson and Sarah Dessen, can finally be taken seriously now that white male writers like Green are ‘elevating’ the genre. Green himself has noted many times that he is frustrated by this positioning of his work as existing in opposition to the many talented women and writers of color working alongside him.

That’s why Green has apparently vowed not to contribute to the problem. Here’s what he told fellow writer Justine Larbalestier on Monday as debate over Book Con’s tone deafness raged on:

@JustineLavaworm I told folks at penguin that six months ago and they’ve been good about honoring it.

When a fan challenged him on his appearance at Book Con as its headlining author, he elaborated further:

@sparkymonster @JustineLavaworm @sarahrhamburg I’m not. I told my pub I’m not doing panels with all white guys. And I don’t…

@sparkymonster @JustineLavaworm @sarahrhamburg …but I think it would be unfair to move the goalposts on Penguin w/o warning.

While the need for discussion and debate about the publishing industry’s lack of diversity is clear, it’s important to remember that many of its members, like Green, are invested in actively trying to help change the culture.

While BEA continues to evade real action in response to the backlash, while actively promoting its all-white guest list, it’s hard to see the upcoming conference as anything but an affirmation of what readers and writers of color have known for decades:

This story has been updated to credit Ellen Oh, the creator of #WeNeedDiverseBooks, by name.