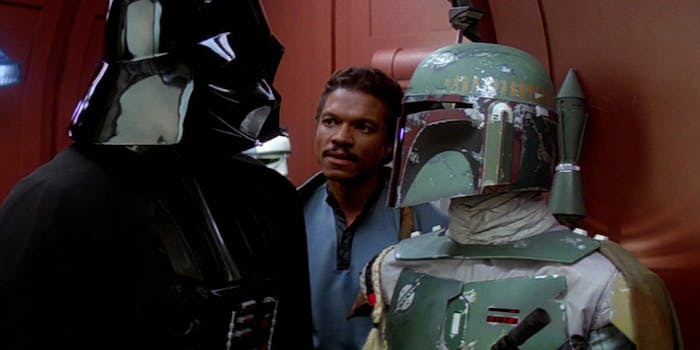 No, that isn’t Boba Fett in ‘Solo: A Star Wars Story’

Fans thought he was lurking in the background of a promo photo.

There’s a lot of speculation about whether we’ll see Boba Fett in Solo: A Star Wars Story. Not just because he fits into Han’s life in the criminal underworld, but because he seemingly appeared in a set photo from director Ron Howard.

Back in September 2017, Howard tweeted a photo bidding farewell to Paul Bettany, who plays the villain Dryden Vos. If you look closely, you can see a Boba Fett-shaped silhouette on the left. Could Fett be working for Dryden Vos? He’s the kind of character who could be recast pretty easily for a secret cameo, because his face is always covered with a helmet.

Had to say goodbye to my friend @Paul_Bettany today. Another terrific performance from a world class talent. pic.twitter.com/6jkNKQNQZZ

Judging by a new promo photo, this theory amounts to nothing. Published in Empire, the new picture shows Dryden Vos in the same location, with a suit of Mandalorian armor in the background. It’s an easy mistake to make, because Boba and Jango Fett wore Mandalorian armor, and Mandalorian armor has a very distinctive look. However, this suit has a different color scheme and a more samurai-inspired look. It’s likely either a collector’s item or a trophy.

Boba Fett may still show up in the movie, but then again, so could basically anyone else. Right now, all we know for sure is that he definitely hasn’t appeared in any promotional images or trailers. We have, however, seen a cameo from a much more obscure Star Wars character.

Tam Posla, a minor background character from Rogue One and the Doctor Aphra comics, can be found playing Sabacc in one of the trailers. He’s a former cop turned mercenary, and in Doctor Aphra he’s dating a cyborg named Caysin Bog, whose body was pieced together by Jedha’s answer to Victor Frankenstein. That makes Tam Posla the first canonically queer character to appear onscreen in a Star Wars movie, although we suspect he’s little more than a glorified extra.