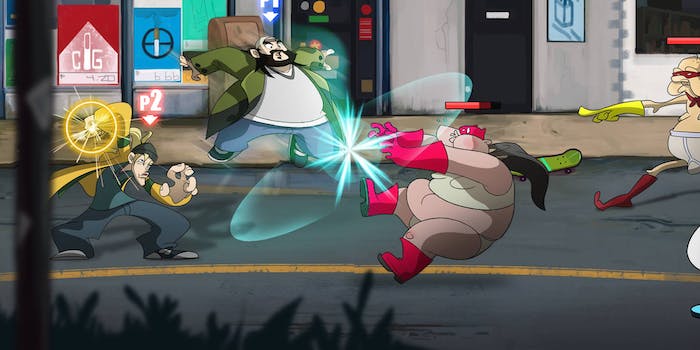 Jay and Silent Bob, the comic relief from Kevin Smith projects, have had a number of spinoffs. From movies to comic books, they’ve done it all—including video games.

A new crowdfunding campaign has started on Fig that hopes to finally bring the zaniness of Bluntman and Chronic to gamers. Kevin Smith and Jason Mewes, along with Interbang Entertainment, hope to raise enough capital to make Jay and Silent Bob: Chronic Blunt Punch.

Fig is a crowdfunding platform that has a stronger focus on video games. Tim Schafer used it to successfully fund Psychonauts 2. With Fig, users can either become backers, or even investors.

Chronic Blunt Punch is a single-screen game similar to River City Ransom or Castle Crashers. Jay and Silent Bob must get to their pot customers trapped inside an Orwellian mall while plowing through a slew of crazy enemies. There’s also a conversation system during enemy showdowns that makes it feel more similar to an RPG; instead of throwing attacks, players will be able to throw insults.

The team hopes to raise $400,000 to make the game a reality. Backers can snag a digital copy of the game for between $18-20, depending on how quickly they back it; $125 will net backers a physical copy of the game, and $10,000 will let the overzealous backer become an extra in Smith’s next movie.