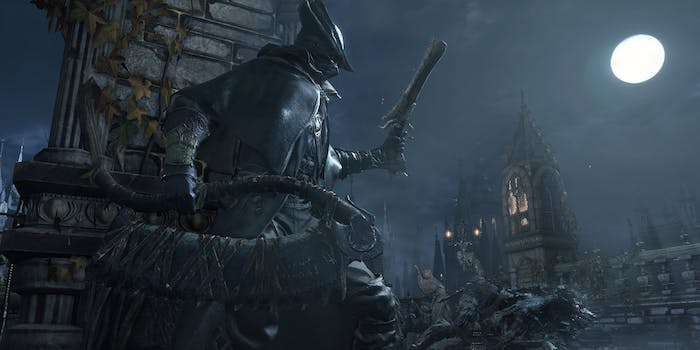 It's a slow burn of a game, but worth every hour.

Bloodborne is in a special category of games that require a bit of time before they click. Thankfully, it doesn’t come down to a key moment 30 hours in, but rather a string of events that positively add up over the first few hours of the playthrough. This makes Bloodborne one of the best examples of the “slow burn” gaming experience. What aids this is its level of accessibility and features that didn’t exist or weren’t fine-tuned in spiritual predecessors known as the Souls series.

Bloodborne’s setting of Yharnam is an alluring but angry land, where the townsfolk are focused on only one thing: killing you. They’ve blamed you for a mysterious sickness that has claimed countless lives. The backstory is cryptic at best, and even if you were the root cause of Yharnam’s profound misery, it’s of no concern to you. Your focus is on an equally unexplained hunt, and you’re the hunter. This is an adventure game with countless enemies and many bosses, so naturally you would want to seek out these foes. 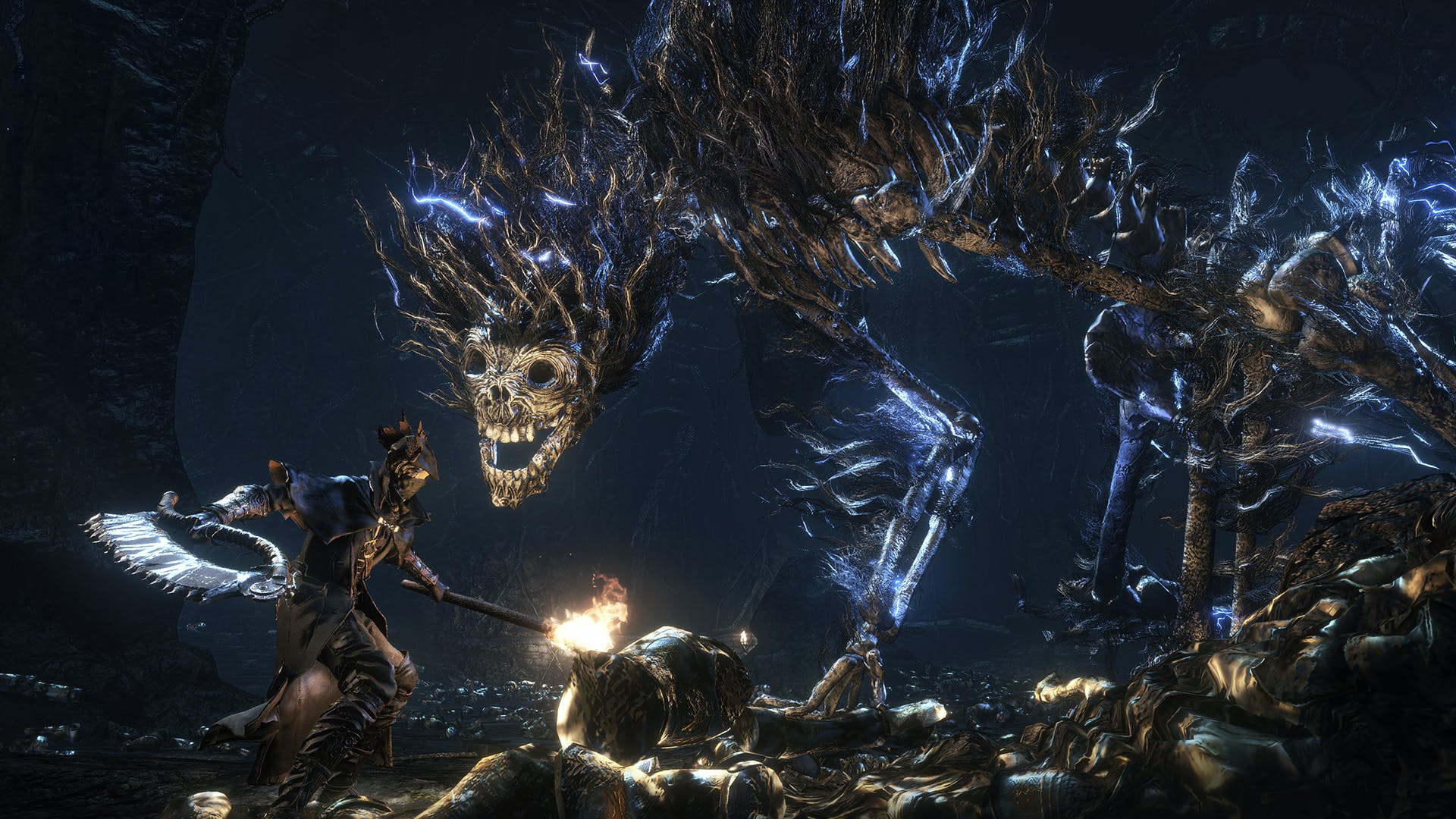 Bloodborne’s Victorian-inspired setting of Yharnam and its adjacent lands are utterly gorgeous. It’s beauty in darkness, complemented by the backdrops of an ominous late afternoon and dreary evening. The initial minutes of the city overwhelms you with the signs of pervasive death, where coffins are strewn along the sides of the streets. This continues into the forests on the outskirts of Yharnam, where graveyards are also battlegrounds.

Navigating around this complicated land is a throwback to the original Dark Souls and underscores one of the weaker aspects of Dark Souls II. Yharnam is both tightly designed and labyrinthine. Perseverance grants a kind of reward that is just as gratifying as defeating any boss: a shortcut. The game is littered with one-way doors and non-functioning elevators. Fighting your way to the other end of a given area will often grant you permanent access to these doorways and elevators. It’s not only a time-saving convenience, it’s also the way the game is telling you to press forward. It’s as if you’re given an invisible pat on the back for getting as far as you have. 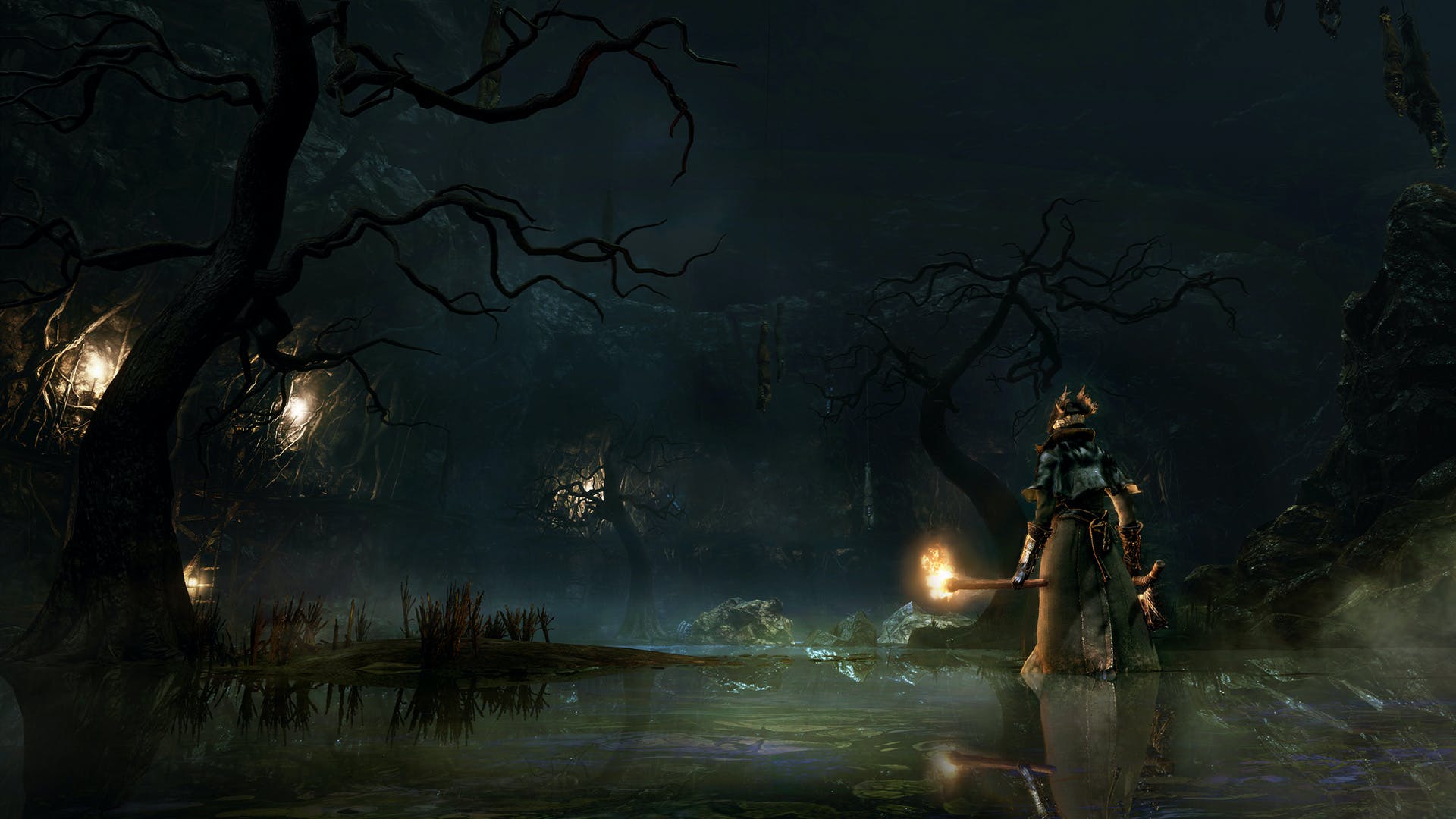 This interconnectivity underscores the thoughtfulness of the game’s level designers. Like any RPG, you’re occasionally confounded by branching paths, but since Bloodborne is an immense joy to play, it’s easy to look forward to exploring every path. Some areas twist and turn while other paths are easier to navigate. To endure an hour-long trek through a new area and to be rewarded with a shortcut that allows you to avoid that area in the future is wholly gratifying.

What goes hand in hand with this impressive level design is Bloodborne’s breaktaking art direction. Forests work as they are often intended in games: to make you feel lost and temporarily disoriented. The castles and fortresses look convincingly timeworn. Many of these places look and feel like they’re beyond repair, renovation, and redemption. Much of the high-rising, gothic-influenced architecture feels like locales I’ve seen in my dreams, rather than nightmares. 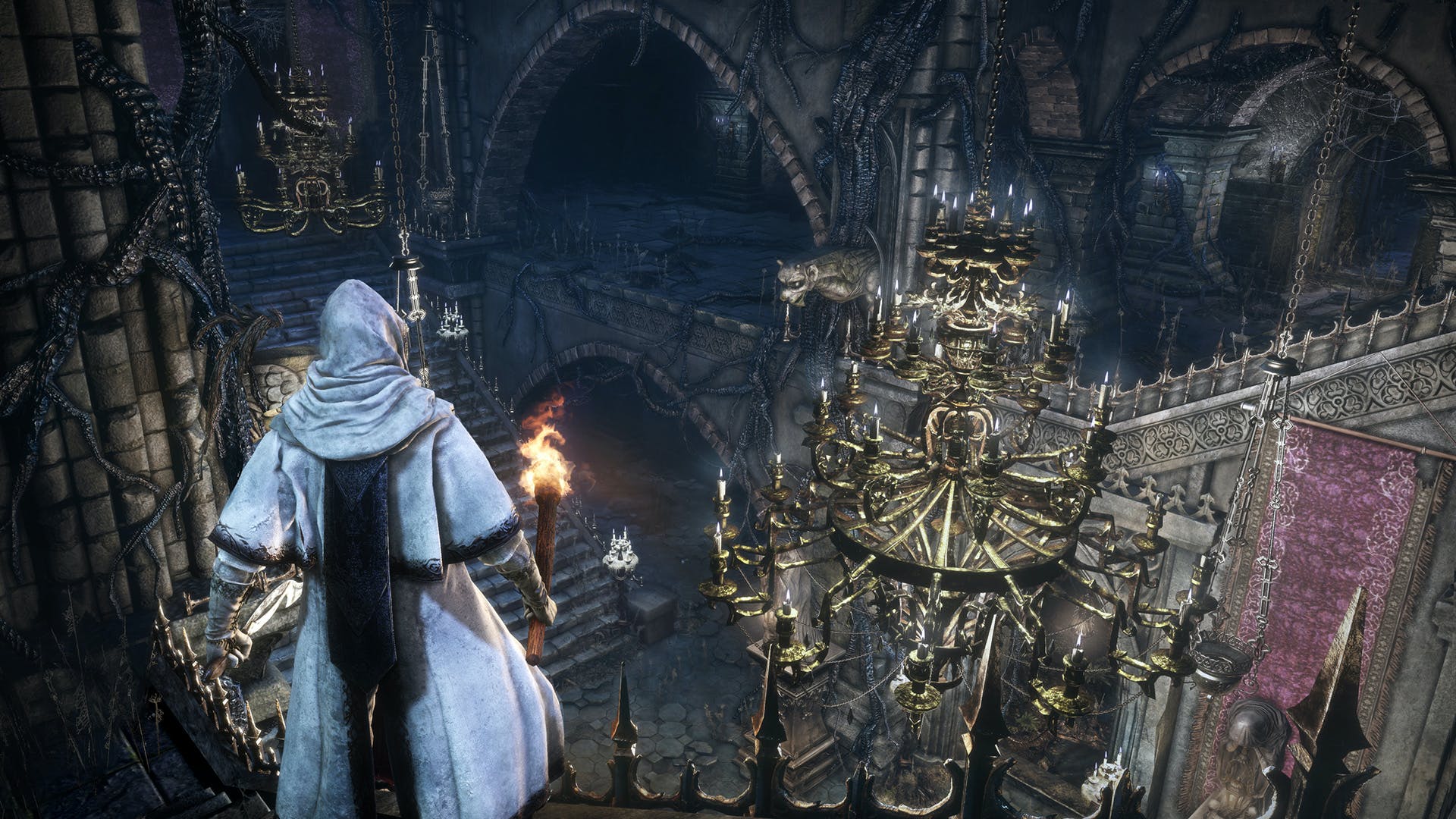 This imaginative art direction unsurprisingly applies to the creature designs as well. Developer From Software saved the more disturbing foes for later, including bat-winged goblins with faces of old men and giant spiders with long hair straight out of a Japanese horror film. The fundamental designs of many of these enemies will be familiar to Souls fans, from large, four-legged creatures to hulking brutes who can deal a surprising amount of damage with a single brick.

Bloodborne, like the Souls games that preceded it, is a gambler’s game. Every time you choose to fight an enemy, you’re placing a bet that you will win. The betting chips come in the form of experience points called Blood Echoes, which you can’t use to level up until you reach the safe haven known as Hunter’s Dream. Like most RPGs, the points needed to reach each next level are higher than the points needed for the preceding level. In Bloodborne, that means more risk each time you’re at a higher level, particularly when you explore new lands in and near Yharnam.

That’s the basis for the risk/reward judgments you face with every choice in Bloodborne. It means deciding whether to take on an enemy in the distance or exploring a new path, even if you used up many of your resources getting there. And you’re reminded that risk is the cousin of complacency. A creature you’ve defeated 50 times can easily kill you the 51st time if you get cocky. What impresses me the most of about the combat design is the speed in which enemies capitalize on your brief moments of complacency. Their behaviors are immediate and merciless. For every instance you’re able to mentally wake up and escape, there’s an instance where there is no chance of survival. 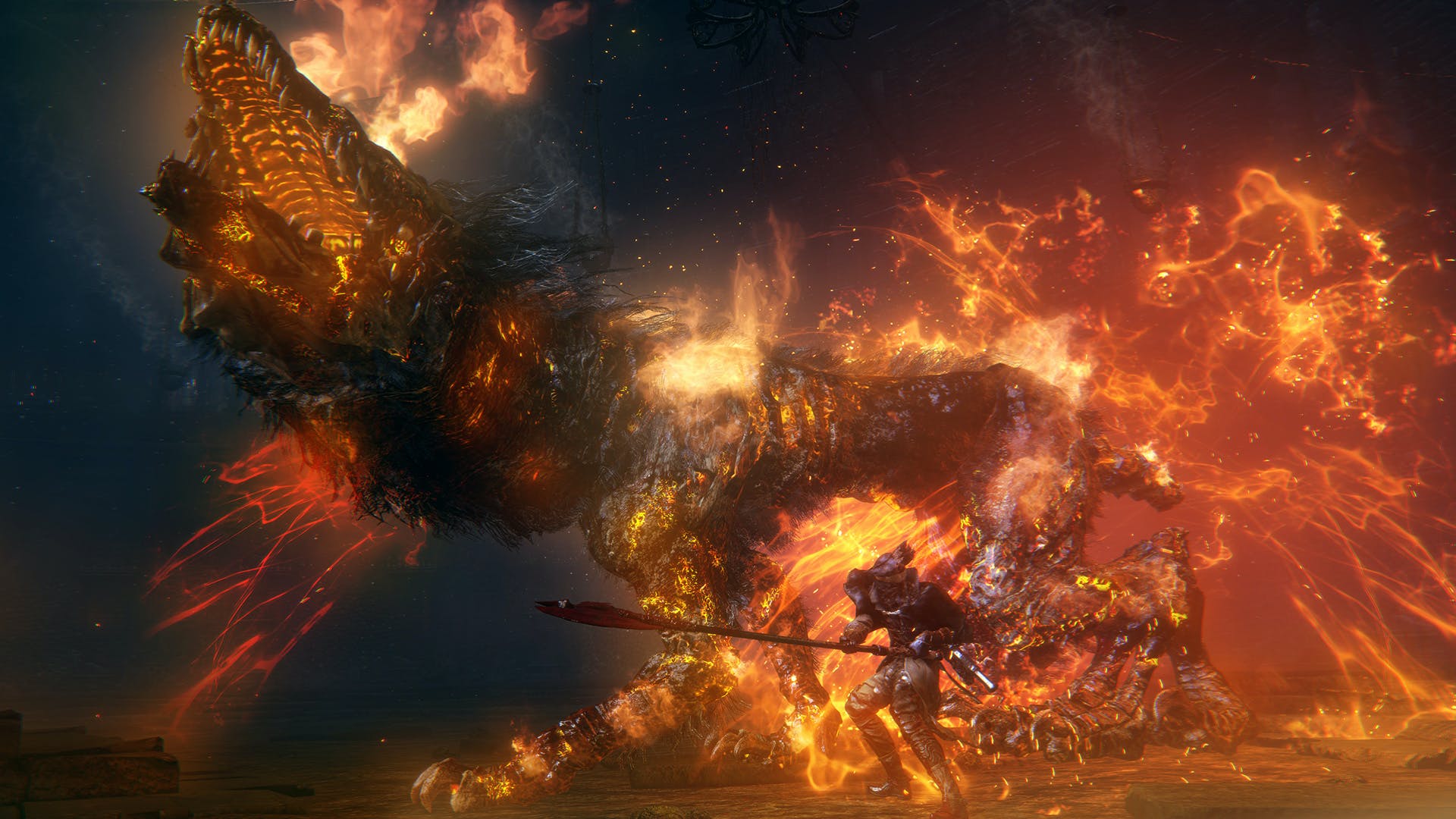 Dying, especially when you’re carrying half an hour’s worth of collected Blood Echoes, can feel soul crushing. If you never played a Souls game before, you’ve been spared even more merciless scenarios, because those games didn’t have some of Bloodborne’s new combat mechanics. It signals a shift from the prior series’ defensive strategies and more incentives to be more assertive and aggressive. The first key feature is the Visceral Attack, a move that deals significant, often fatal damage provided you can land a hit with your firearm as your opponent is in the middle of a melee attack. What sets Bloodborne apart from the Souls games is the Regain System, which gives you a brief window of opportunity to retrieve lost health. This can only be accomplished by landing attacks within seconds of losing your health. What results is an intense, pulse-racing exchange of blows not unlike a heavyweight boxing match. Yes, there will be times where a temporary retreat is the best decision, but this occurs much less than in other Souls games.

Much of Bloodborne’s depth is tied to its sense of discovery and the game beyond the main journey itself. It’s in trying to make educated guesses on how some of the more enigmatic items work. It’s in sharing experiences with friends while playing co-op or playing parallel single-player playthroughs while on party chat. The next best thing to discovering a hidden area is in helping friends and strangers learn how to find that secret place. For a game that can be fully appreciated as a solitary adventure, Bloodborne is an exceptionally social game.

It was around the five hour mark that Bloodborne clicked for me. By then I understood the Visceral Attack, the Regain System, unlocked a couple of useful shortcuts, and defeated two bosses. I knew that Bloodborne was a slow burn experience because my appreciation for it wasn’t associated with one event or feature. I spent a couple hours away from the game, and once I fired it up again, I was overcome with a rare, child-like impatience. I wanted to skip past the company logos, the title screen, and the loading screen as fast as possible. I was excited to get back to Yharnam, despite all the lives I would soon lose, let alone all the Blood Echoes I would waste. And I was also sad upon the realization that I haven’t felt this kind of impatience and excitement in a game in a long time, not since my initial playthrough of The Last of Us. That was two years ago.