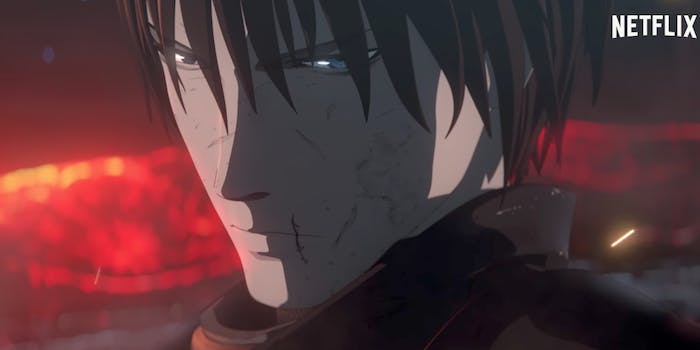 The anime is heavy on action, spectacle, and sci-fi visuals.

In its attempt to corner the market on original content, Netflix has left no genre unconsidered, and that includes anime. Its new original movie Blame! isn’t even the first anime out its doors.

Loyal fans of Blame! creator Tsutomu Nihei will recognize one of the film’s main characters: Killy, a quiet gun-slinging renegade. He made a brief appearance in Netflix original anime Knights of Sidonia, but left enough of an impact for Nihei and Netflix to adapt one of Nihei’s most iconic mangas.

Blame!, which is available now on Netflix, started as a manga that debuted over 20 years ago. After the positive response to Killy’s appearance in Knights of Sidonia, director Hiroyuki Seshita decided it was time to finally bring Nihei’s beloved manga to life. For those wondering how faithful the adaptation is, Seshita maintains the work itself has evolved over the years—and the anime follows suit. “It’s a body of work that [Nihei] restructured and redesigned and reconceptualized,” Seshita said.

Blame! is a dark science-fiction tale that takes place in the distant future. In this future, humanity struggles to survive in a dilapidated city where dangerous machines called “Safeguards” aim to wipe out what’s left of the human race. As a result of constantly getting hunted, humanity has resorted to surviving in small, isolated groups. Killy is like a retro-futuristic version of The Gunslinger from Stephen King’s Dark Tower. He doesn’t say much, but he’s an imposing figure with an ridiculously large gun that proves to be highly effective against the Safeguards.

Killy travels through the derelict city structure to find a human that possesses a rare gene that would save humanity from the Safeguards. As the story begins, he stumbles across a group of small children who have stolen survival suits and gone wandering. The story itself focuses on these small children, an older character named “Pops,” and Killy as they venture to an automated factory to retrieve a synthetic version of what Killy is looking for. As a result of a lead character who has little dialogue, this minimalistic story focuses mostly on visuals over narrative or characters. It’s a gorgeous film, filled with striking sci-fi vistas and killer machines resulting in intense action sequences.

If you’re a fan of the manga, you’ll remember the original story has a complicated narrative. Seshita explained he and creator Nihei wanted to avoid that for this adaptation to make the anime more approachable to new viewers. “He knows that the original that he put together 20 years ago was a very complicated, intricate storyline that was aimed very much at anime and sci-fi fans”, Seshita said. “Sometimes it was hard to follow. For the movie adaptation, what Mr. Nihei wished for was to make something that was more accessible to a wider audience. Which was exactly what we wanted if we were going to put a movie together. That was very important for us to move forward.”

Blame! is about to streamline its convoluted manga narrative by focusing on the human survivors, as well as the children that populate the film’s prologue. As food rations dwindle, the village people become increasingly more desperate to find new, alternative food sources. While the manga was more focused on sprawling world-building, Seshita’s adaptation allows the film to focus more singularly on the characters. This way, these human dwellers feel more like actual people, and when the story races toward its destructive climax, certain consequences have impact.

For those who are fans of Knights of Sidonia, they will quickly notice how considerably darker and more violent Blame! tends to be. The anime adaptation is not as charming or light-hearted as that series. The story is mostly humorless, with lead characters who are either stoic or desperate to ease their starvation and suffering. Even if Killy is somewhat of a vapid, emotionless lead at first, Seshita gives him time to see the suffering of the villagers, reminding audiences what is ultimately at stake. The anime may be heavy on action, spectacle, and sci-fi visuals, but Seshita doesn’t forget to humanize Killy. Toward the end, he is realized enough to avoid being a cipher. That’s impressive for a character as spartan as Killy.

Even with fleshed-out characters, the real star of Blame! is the sprawling, crumbling cityscape. It is constantly in a state of decay and growth. The multiple-level city is perpetually expanding as the Safeguards move with spider-like precision toward their human prey. If the film manages to capture one aesthetic element of the manga, it is the look of the machines and the city itself. It makes sense that Blame! captures so much of the manga’s essence as the manga’s creator was heavily involved in the creative process for the adaptation. “He was there from the beginning”, co-director and CG supervisor Tadahiro Yoshihira said. “He has a huge understanding of what we’re trying to create visually, so there have been a lot of creative discussions.”

For fans of the manga, the anime may come across as somewhat disappointing. It’s not as dense as the original, or is it as narratively complex. It pays enough homage to the manga that die-hard fans should find something to appreciate, however. If you’re a fan of anime but not familiar with Nihei’s Knights of Sidonia, Blame! is a fascinating place to start. As Seshita proclaims, “[Blame!] is more like a door that welcomes people into this world.” As far as doors go, Blame! is a gorgeous, if somewhat translucent gateway to an incredibly expansive world.