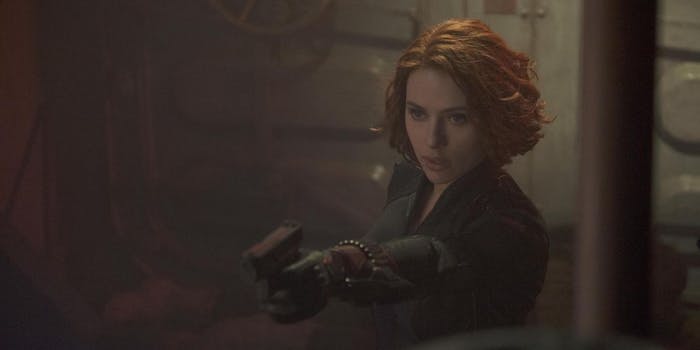 Another ‘Avengers’ actor tweets his support for Black Widow merchandise

We may have just gotten a bit closer to knowing #WheresNatasha.

When he’s not playing Agent Coulson in the Avengers and Agents of S.H.I.E.L.D franchises, Clark Gregg is still committed to superheroic ideals, like equality, feminism, and, uh, capitalism.

Gregg tweeted in support of the #WheresNatasha hashtag on Sunday afternoon, linking to a Change.org petition to add Black Widow to a group set of Age of Ultron action figures.

Gregg’s tweet follows ongoing controversy over Natasha’s exclusion from Marvel‘s merchandising, which has consistently ignored or excluded her from its collectible action figure lineup. Last month his Avengers costar Mark Ruffalo also joined the calls for Natasha to have a more prominent merchandising campaign, noting that his daughters and nieces wanted to enjoy the Avengers lineup, too.

While Hawkeye has also been left out of this particular collectible set, it’s hard not to see the consistent exclusion of Natasha from merchandise as sexism—especially when both Marvel and Disney have displayed sexist double standards regarding their multiple franchises in recent years. To date, here’s just a few examples of the systematic exclusion of women on the part of Marvel’s and Disney‘s product development and marketing departments:

In the wake of this sustained exclusion, fans have been hammering away at hashtags for each of their ignored favorites: #WheresNatasha has been a staple since 2013, with #WeWantLeia and #WheresGamora each following.

In the case of Natasha, the blatant product snub is the latest in a long line of added insults to injury over how Scarlett Johansson‘s character has been perceived by fans and the media, even her own costars. There’s the crop of sexist reviews she’s treated to with each new Avengers installment; the sexist double-standards of interviewers on the promotional circuit; the repeated unfunny slut-shaming from Hawkeye actor Jeremy Renner; and even the writing she’s occasionally treated to from Joss Whedon himself.

But given how pervasive and systematic the Disney/Marvel exclusion of female characters has been so far, all of these things won’t add up to change on behalf of the companies themselves—especially when the root problem may be the idea that including female characters in the product line will make those products less valuable to the core target demographic—a.k.a. boys. This is a concept deeply ingrained in an already gendered culture, and built into the foundations of marketing itself, which routinely pits geek girls against a consumerist culture. And when ideas of equality and inclusivity go head to head against the dollar, the dollar usually wins.

Still, the more noise fans—particularly prominent fans like Gregg and Ruffalo—can make about the double standard, the more the pressure piles on for Marvel and Disney to step up their game.