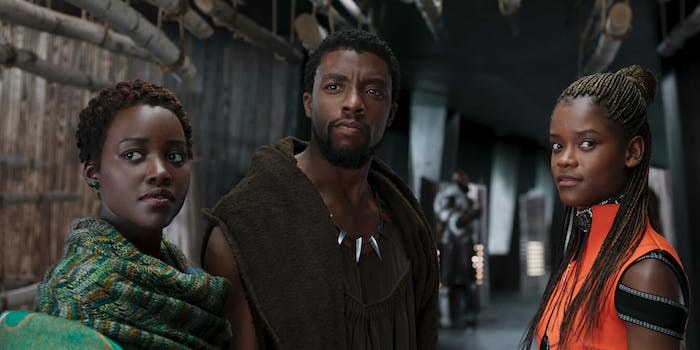 Saudia Arabia is relaxing its conservative attitude to cinema.

Along with breaking box office records, Black Panther is the first movie to screen in Saudia Arabia in 35 years.

In December 2017, Saudi Arabia announced that it would lift the decades-long ban on movie theaters. Premiering on Wednesday, Black Panther is the first film to receive a public release since the early 1980s, after the country adopted a more conservative religious form of government.

Photos from the first screening show a non-segregated audience, with men and women sitting together at a new movie theater in the capital city Riyadh. AMC plans to open up to 100 multiplexes in Saudi Arabia over the next few years, creating a lucrative new market overseas. Will a new Saudia Arabian film industry follow?

Arrivals and the check-in desk for the first cinema to open in #Saudi Arabia! The invite-only private screening is for Black Panther. pic.twitter.com/QMUh6gu1il

According to the Hollywood Reporter, 40 seconds were cut from Black Panther for its Saudi Arabian release. This isn’t particularly unusual since different countries have different content restrictions. Studios also make voluntary cuts so a film can be released at a lower rating, inviting a wider audience.

Black Panther has already been censored elsewhere, although for different reasons than in Saudia Arabia. In India, the film screened with one word bleeped out: “Hanuman,” a Hindu god whose name was repurposed for a Wakandan deity.