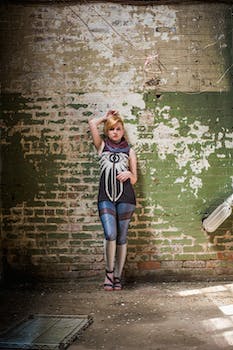 Get a peek inside the design process behind BioWare's newest apparel.

Video game apparel still has few options for women beyond the boring old graphic T-shirt. That’s why a fashion show hosted by BioWare and ThinkGeek Solutions at August’s PAX Prime  in Seattle was so exciting.

ThinkGeek Solutions, formerly Treehouse Brand Stores before being acquired by the parent company of ThinkGeek, creates licensed apparel for the BioWare online store and other game developers. It’s new line displayed at PAX Prime has been in development for about a year according to the line’s art director, Alice Bolte. Bolte told the Daily Dot that the women’s wear line began with their Mass Effect N7 armor stripe angle ladies hoodie. It became one of their all-time best-selling hoodies.

“We knew there was a women’s market, but then that gave us the wherewithal and the grounds to move forward. At the time Treehouse didn’t have the team to do women’s wear, but they knew that they wanted to. So they began putting together a team to do it right, in the right way,” Bolte said. 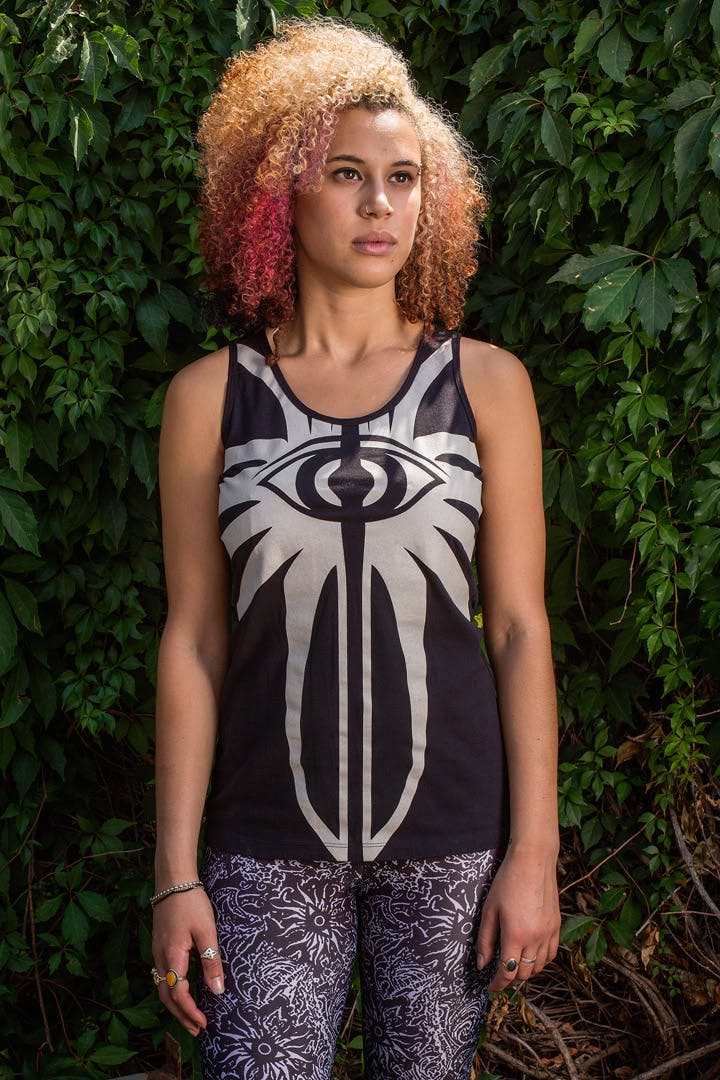 The worlds of Mass Effect and Dragon Age are rich and vast. Both series include three games so far, each with colorful settings and a wide-range of characters that fans adore (or love to hate). There’s a lot of inspiration to be found within the many, many hours of gameplay, so it’s hard to see where you’d even start choosing what to use for a clothing line. The process behind the collection, however, simply began with a conversation. This included the game studio as well as ThinkGeek Solution’s president, buyer, creative director, and art director. As a team they discussed the direction and expanding the line.

After that, they began the process of mood boarding and research. Apparel designer Symantha Perrera told the Daily Dot mood boarding consists of looking at colors, fabric, trim, and more, and pairing that with research on the game itself and the market, looking at what is current, fashionable, and trendy. 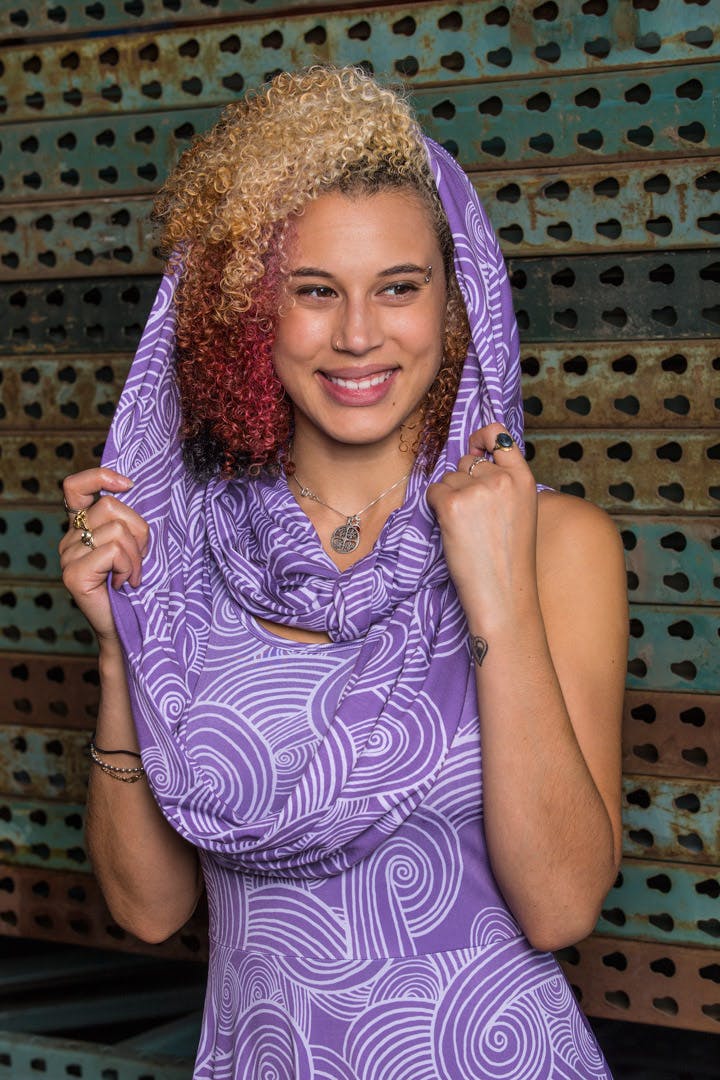 “When we first start, Symantha and I, we go look at what’s trending in stores and we get a good feel of what customers are buying,” apparel designer Sara O’Reilly explained. “Then we also take into account each character, what their personality is, what they’re wearing in the game, and we really try to do a mix so it’s defined by the character—it is the character—and yet it is still fashion forward and in trend because women want to represent the characters in their games as much as look fashionable at the same time.”

Perrera added that they also look for silhouettes that flatter multiple shapes and sizes. She said that going into this women’s wear line they wanted to do something cohesive so fans could mix and match items from the games, which was a new effort for them. Looking at the collection and the variety of items, the line seems to succeed in this respect. For example, Mass Effect fans can match all the Tali-inspired items for a look focused on one character or mix a pair of Commander Shepard leggings with a N7 or Tali top. 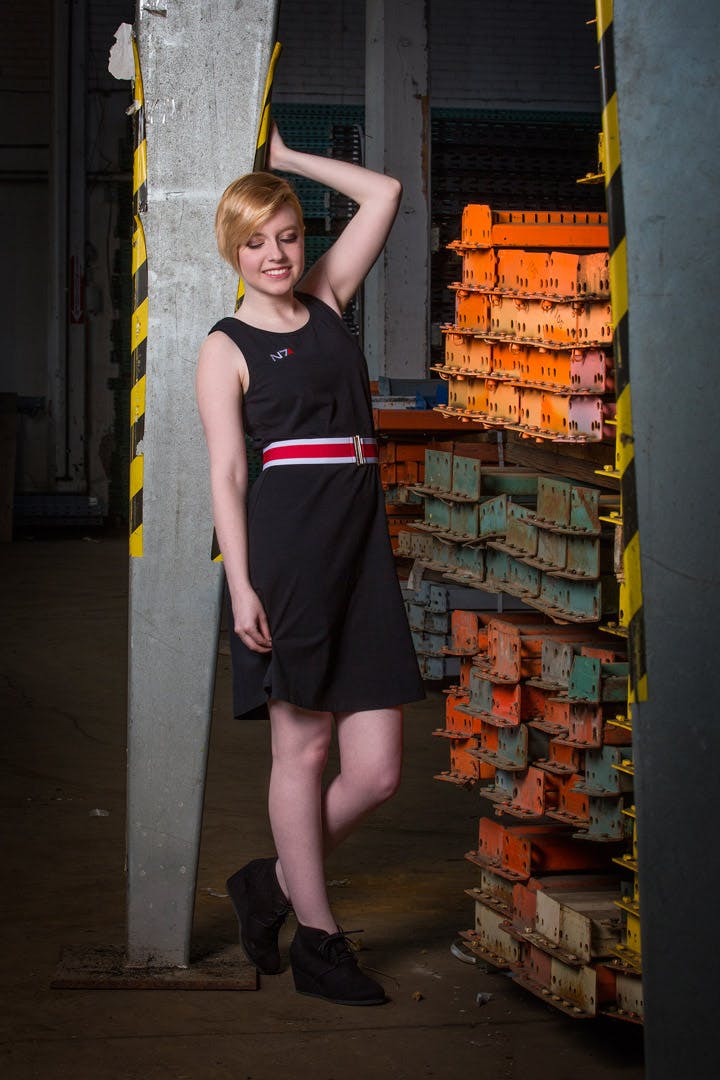 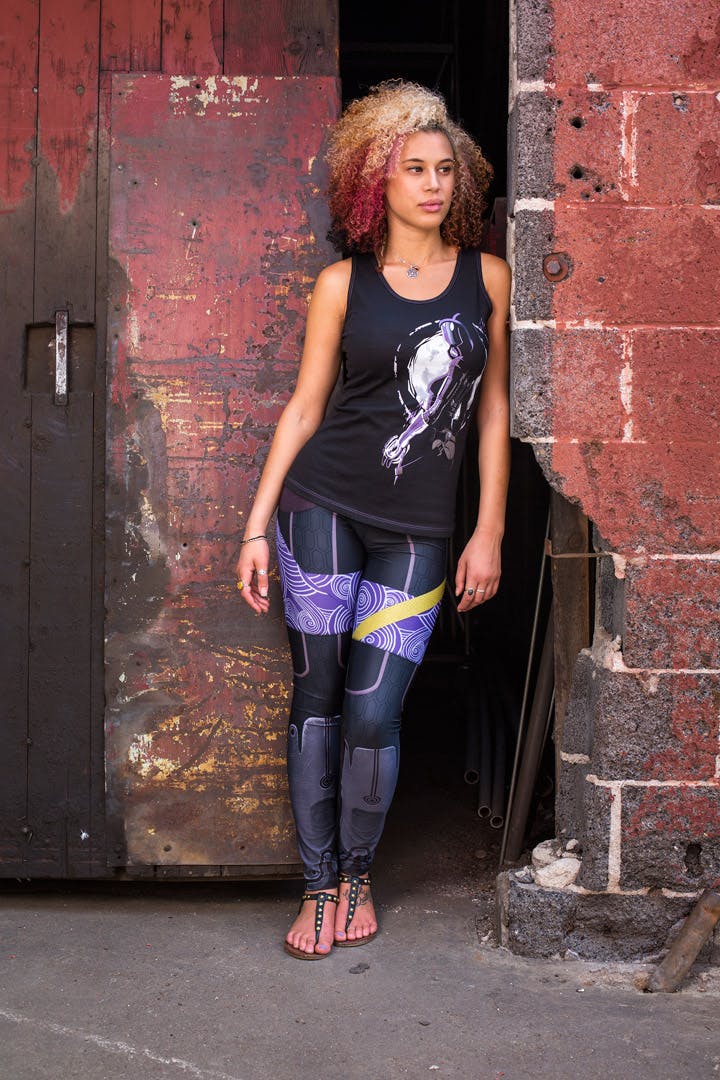 After the mood boarding phase Bolte said they collaborate with the studio to make sure color, style, and everything else is heading in the right direction.

“Once those are approved and we get into [the] concepting phase, then we start developing CADs [computer-aided design] which is just a 2D version of our 3D prototypes of our samples and we approve those. We always are in communication with our partners and make sure we’re all on the same page and making sure that we’re doing what the demographic and gamers want. That’s kind of what’s in the forefront of all our minds is designing for gamers,” she said.

This idea continues in the prototyping phase according to Bolte, where they’ll create many different prototypes to make sure they get it right and sometimes even go so far as to do calls with the studio about just a single garment to make sure it’s right. Once everyone feels the look is ready, it will head to production.

The end result is what fans saw at the PAX Prime fashion show. According to senior director of marketing Todd Lido, the idea for the show came about while brainstorming how they could kick off the collection in the right way to engage fans. 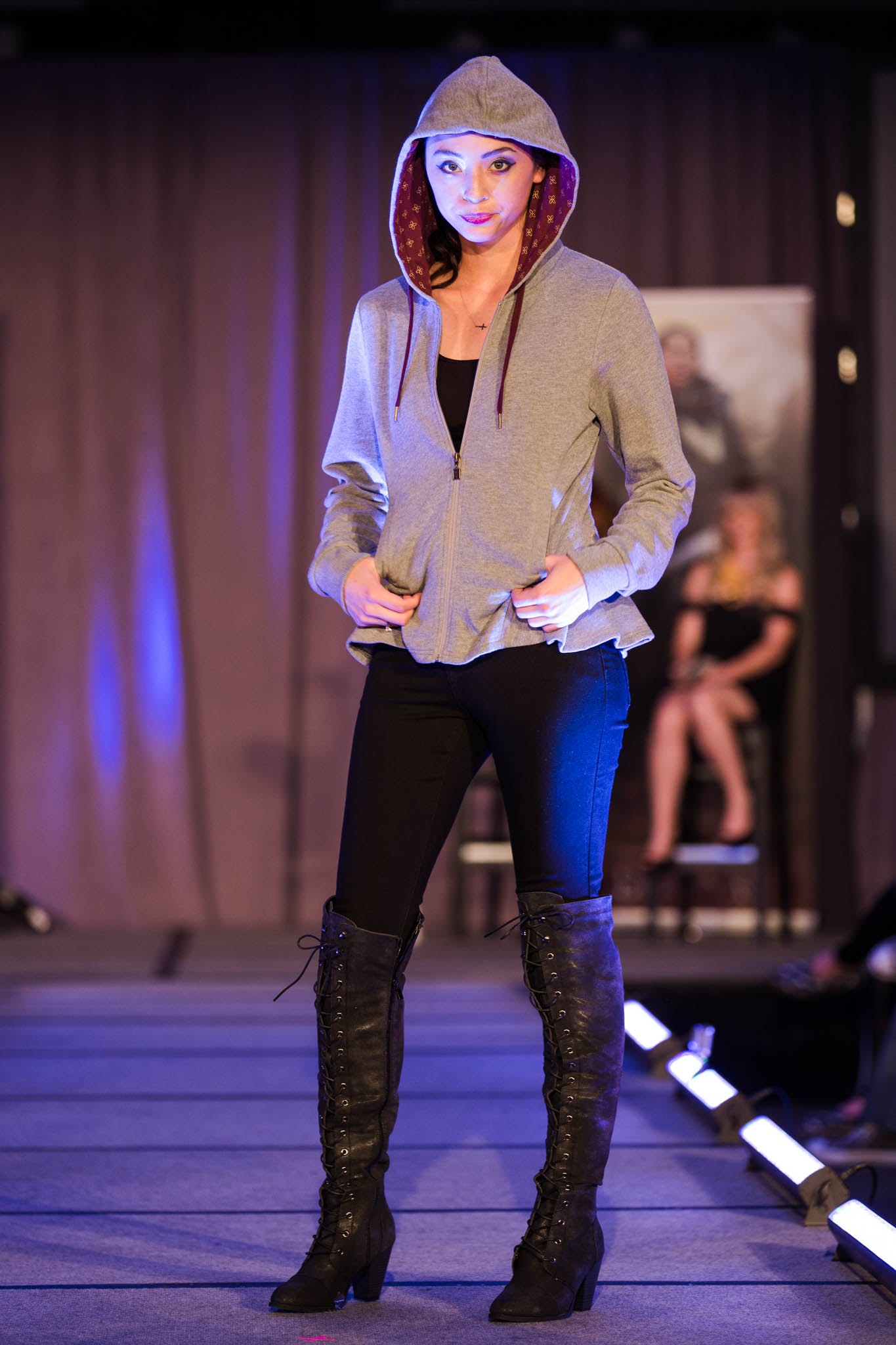 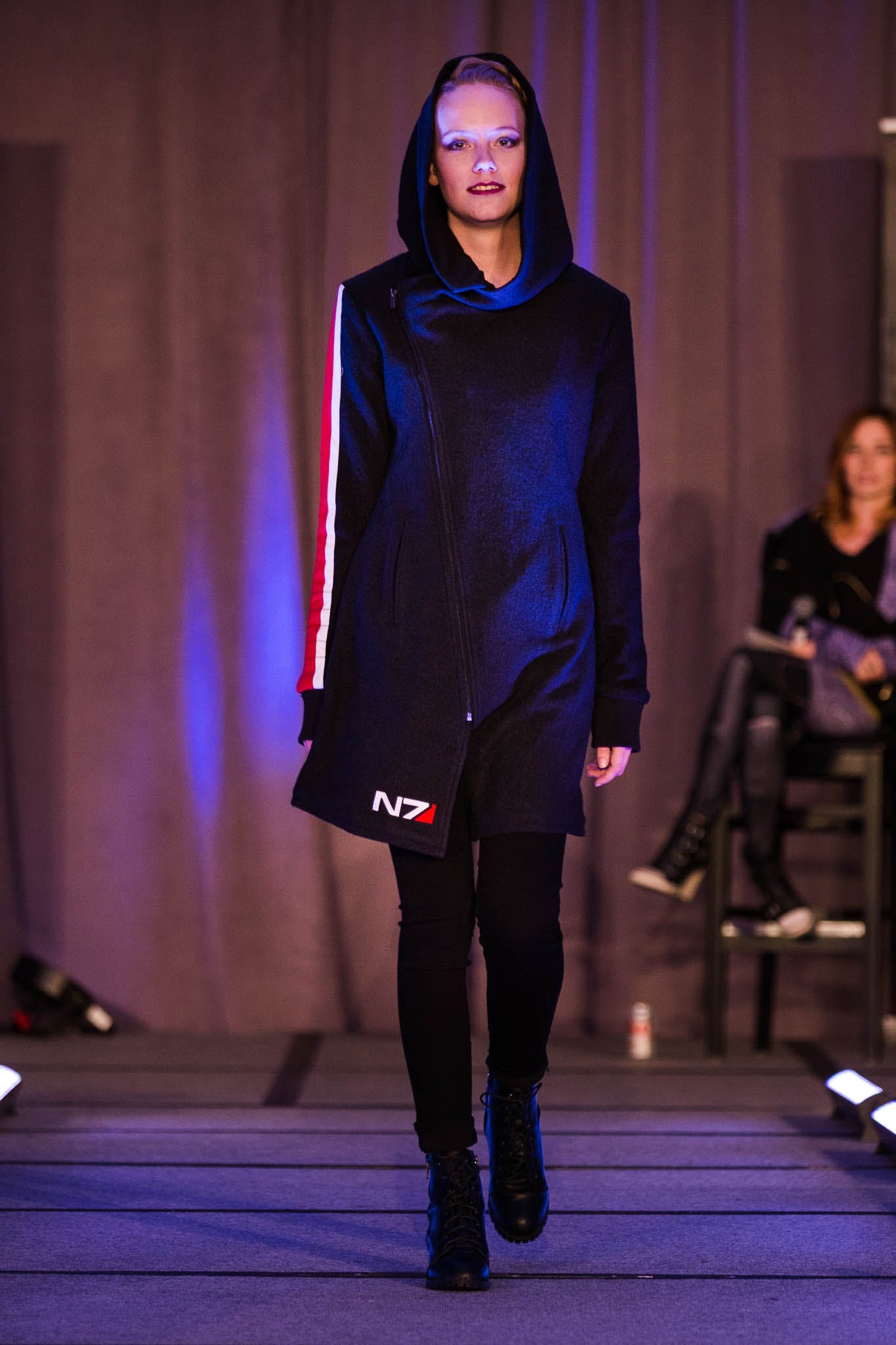 “We took it to BioWare and they loved it. They thought it was a terrific idea. It’s equally important to them that we’re serving the entire community as it is to us, so they were really super supportive of the idea, let us use their space at PAX to do it, and it really became a collaboration of how it was going to be done,” Lido said. “They were instrumental in sort of the stagecraft of it and making sure that we had a runway and we had all this stuff, so it became a very collaborative process at that point. But it was really just how do we do this in a way that is going to create a splash and get the community talking about it and generate spin for it because we want to build on this. We want to make it a long-term thing, where we continue to have more releases going into the future and expand the line to better suit the audience.” 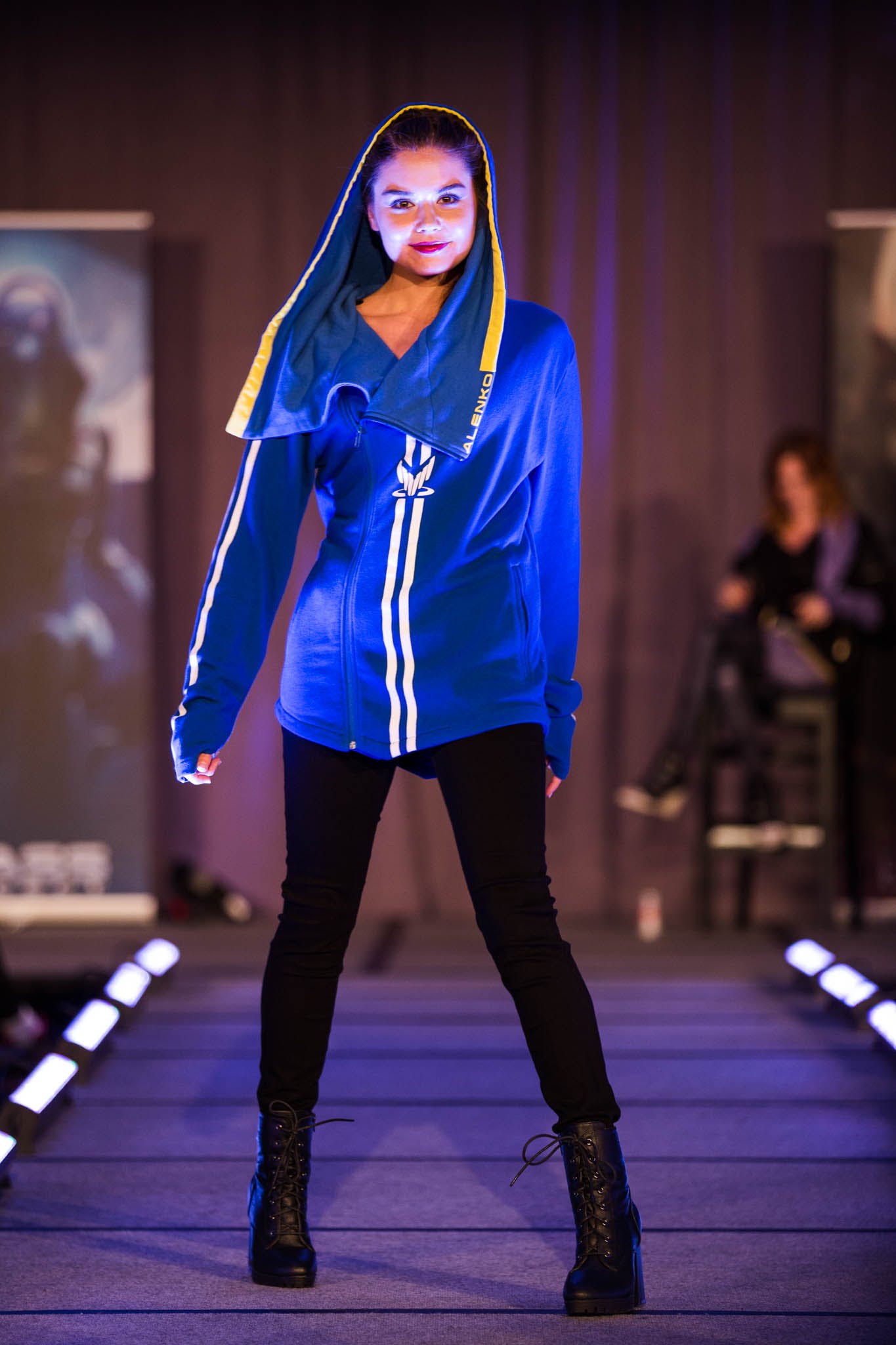 For any fans wondering when items from the show that aren’t on the website yet will be available for sale, Lido said there will be a release in October and a release in November. Fans can keep an eye out for even more in the future.

As for designing women’s wear for other game companies, ThinkGeek Solutions works with Bethesda and Crystal Dynamics, but gamers will have to wait and see if Fallout fashion could be in their futures. The team could not comment on upcoming lines for other companies.

“We can’t really talk about it. Right now the most ambitious line would be BioWare and there’s much to come in other games and IPs—so that’s exciting,” Bolte said.

Until then, gamers will have to get their fashion fill protecting Thedas or defeating Reapers until we get more fashionable gamer gear designed for women.