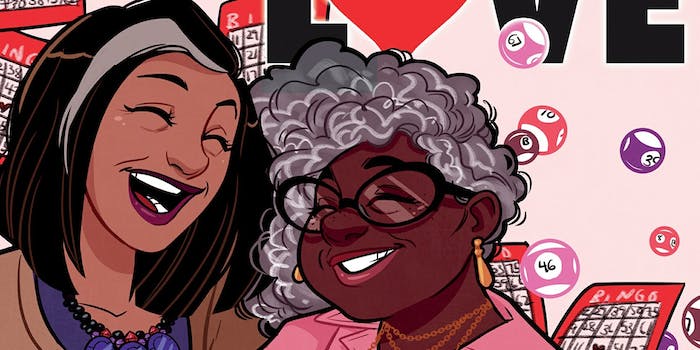 Originally published as part of a Kickstarter campaign, Bingo Love is a perfect example of a comic people are desperate to read, but that isn’t traditionally recognized by mainstream publishers. Image Comics picked it up thanks to its online popularity, as the latest in an enthusiastic resurgence for wholehearted, self-indulgent romance comics.

When I use terms like “self-indulgent” and “comfortingly predictable,” I don’t mean it disparagingly. That’s really the whole point of a book like Bingo Love, where two people fall in love, have their lives complicated by circumstance, and eventually find a happy ending. It’s sweet, it’s heartwarming, and it’s reassuring. That last part is one of the original selling points for Bingo Love, because it’s vanishingly rare to see queer black women anywhere in pop culture, never mind getting a gloriously happy ending. There are boatloads of romance novels and made-for-TV movies telling schmaltzy love stories about straight, white people, and this book scratches a similar itch.

Writer Tee Franklin began her comics career in 2016, so it makes sense for the dialogue to be a little less polished than the art. Sometimes characters explain their feelings in an unrealistically straightforward way, and there wasn’t always enough difference between the 1960s Hazel and Mari and their grandma-aged selves in the present day. But a lack of subtlety isn’t necessarily a big problem here since we signed up for a cheesy love story in the first place.

Character design is the book’s greatest strength. Artist Jenn St-Onge has a great eye for fashion and hair, both in the 1960s and in the present-day scenes. Each character’s fashion sense feels realistic and distinctive, and beyond that, we see them actually picking out clothes and doing their hair. This may sound like a weird thing to single out, but if you’re into both fashion and comics, it’s an ongoing problem. A lot of artists exhibit surprisingly little understanding of contemporary fashion, while genre comics inevitably focus on cool costumes over plausibility. Bingo Love uses hair and clothing to bolster characterization, which ties into the romance genre’s relationship with desirability.

In my experience, romance novels often try to make their protagonists relatable through low self-esteem, either bemoaning their appearance like Bridget Jones or sharing dubious humblebrags like, “Oh, I’m so self-conscious about my long, skinny legs.” Bingo Love avoids this trope. Mari has stretch-marks, Hazel is overweight, and they’re both beautiful. There’s no self-doubt in their attraction to each other, and when Hazel has a sexual awakening in her 60s, it’s depicted as fun, loving, and sexy—essentially the polar opposite of typical stereotypes about older women and sex. It’s easy to see why this comic was such a hit on Kickstarter, delivering a heartwarming story you can read in one sitting.

Bingo Love is out on Feb. 14 from Image Comics.