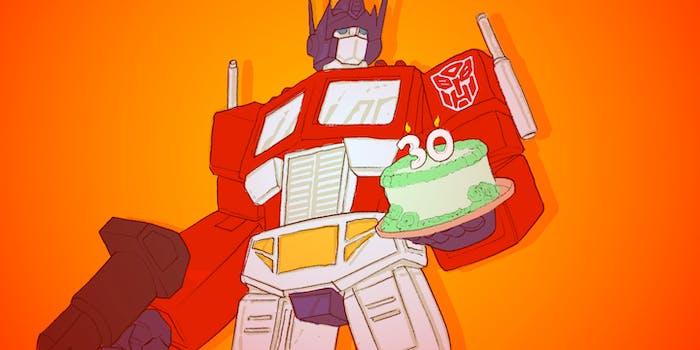 These classics are celebrating 30 years, and most of them are well worth re-watching

As proven by Hollywood’s obsession with nostalgic reboots and remakes, the 1980s were an awesome time for sci-fi and action movies. Ironically, this was because filmmakers had more creative freedom to launch weird movies like Little Shop of Horrors and Labyrinth, which would probably never get the greenlight in 2016.

Amazingly, both of those movies (plus Aliens and The Fly and a whole host of others) came out in the same year in 1986. To mark their 30th anniversary, we’ve put together a list of the best geeky ’86 films to re-watch in 2016.

The sequel to Ridley Scott‘s Alien cemented Sigourney Weaver‘s role as a geek icon—and James Cameron‘s status as the king of sci-fi/action blockbusters. Fans are still arguing over which film is better: Scott’s atmospheric horror or Cameron’s big-budget action. But either way, Aliens is still just as exciting as it was in 1986, and is definitely a better movie than any other Alien spinoff to date.

2) The Transformers: The Movie

This colorful animated classic is what the Transformers franchise looked like before Michael Bay arrived. Leonard Nimoy voiced Galvatron, and Orson Welles (in his final role, recorded a few days before his death in 1985) played the evil planet transformer Unicron.

Directed by Jim Henson, produced by George Lucas, and starring David Bowie and Jennifer Connelly, Labyrinth is the definition of a cult classic. If you hear about a 30th anniversary screening nearby, you should jump at the chance to see a big-screen version of David Bowie dancing and singing with a crowd of muppet goblins.

Starring Geena Davis and Jeff Goldblum, David Cronenberg’s remake of The Fly had a huge impact on sci-fi/horror cinema and is often cited as an icon of the body-horror genre. “Be afraid. Be very afraid.”

The Voyage Home is one of the strangest Star Trek movies to date, and is also one of the most entertaining. Its charmingly bizarre plot sees the Enterprise crew travel back in time to 1980s San Francisco so they can kidnap a humpback whale (seriously) and enlist its help to save the world. Directed by Leonard Nimoy, The Voyage Home is a funny and moving end to the trilogy that began with The Wrath of Khan.

In retrospect, Highlander‘s success is slightly baffling. This historical fantasy movie was the Stargate of the late ’80s and early ’90s, spawning numerous sequels and TV spinoffs, along with an online fanfic community that survives to this day. In the original film, the most charming detail is surely Sean Connery playing an Egyptian Spaniard—a truly mystifying decision, since the film is called Highlander and Sean Connery is only capable of performing in a Scottish accent.

As the first adaptation from Thomas Harris’s Hannibal Lecter novels, Manhunter wasn’t seen as a geeky movie at the time. It was a box office flop, but in recent years it earned more interest thanks to the success of the Hannibal franchise—especially now that Bryan Fuller‘s Hannibal series has such a passionate fan following. Manhunter was actually adapted from the same book as the TV show, Red Dragon, and it’s interesting to compare two such wildly different interpretations of the same story.

This family comedy is a Frankenstein story for the E.T. generation, starring a cute military robot that gains sentience after being struck by lightning. A precursor to 2015’s Chappie, perhaps?

A comedy musical about a man-eating alien plant? The 1980s were a truly magical time.

Finally, we have to give an honorary mention to one long-forgotten geek movie that came out in 1986: Howard the Duck. It’s widely regarded to be the worst Marvel adaptation of all time, and as a live-action comedy film about a human-sized alien duck, it’s still kind of difficult to believe it even exists. Yet here it is, and Howard even got a brief cameo in Guardians of the Galaxy—not to mention a new comic series that launched in 2015.