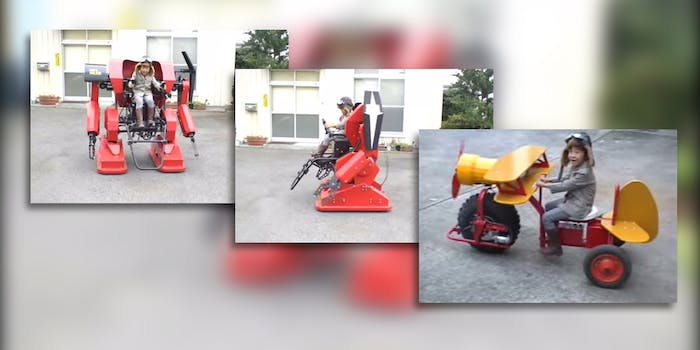 This isn't your average handy-man dad.

What was the best gift that you ever received from your parents? Some article of clothing? Perhaps a Playstation 4? Whatever it was, you are now instructed to surrender—forever—to several children in Japan whose father built them, among other things, an actual working mech suit.

In a YouTube video from December 2010 that recently gained traction on Reddit, user sakakibarakikai’s young children are seen gleefully riding the mech suit around the family driveway (presumably because Dad has not yet finished the life-size model of Zeon from Mobile Suit Gundam). Other toys featured in the video include some sort of biplane/riding-mower hybrid vehicle and an impressive, if somewhat deadly, tic-tac-toe setup.

After sending their own parents on guilt trips, redditors praised this mystery father’s apparently endless love for his children.

If sakakibarakikai’s daughter suddenly develops an interest in, say, Transformers, he is going to have a lot of work ahead of him.