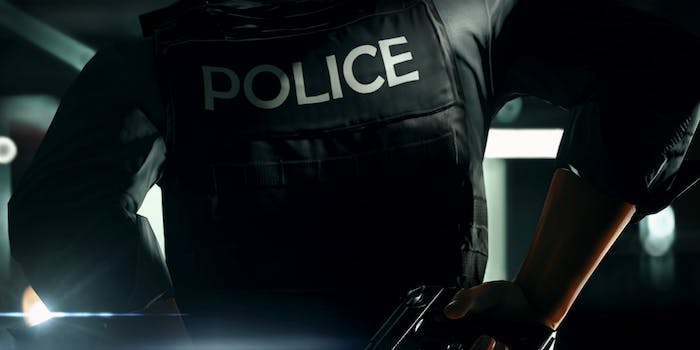 This would have made for a better expansion than a full release.

If you thought Battlefield Hardline sounded like an ill-conceived mashup of cop show and modern military shooter when it was announced last May, you were right.

It’s very difficult to get past Battlefield Hardline including the word “Battlefield” in the title. The Battlefield franchise pioneered large-scale, combined-arms, military first-person shooter games. Hardline includes nothing of the sort. The only time Hardline felt anything like a Battlefield game to me is when I was cycling weapon loadouts.

The five multiplayer modes that pit law-enforcement officers against criminals are the best parts of the game, even if some of them are rehashes of typical FPS multiplayer like “kill the VIP” or variants of the “Rush” multiplayer mode made popular by Battlefield: Bad Company. All five modes feel like they could be fan mods instead of official releases from Electronic Arts.

The single-player campaign is a terribly written episodic cop show that wastes the game’s best actor. It’s littered with predictable tropes and features mechanical elements that are too ridiculous to take seriously.

Then again, a cops-and-robbers themed Battlefield game makes no sense any way you present it. 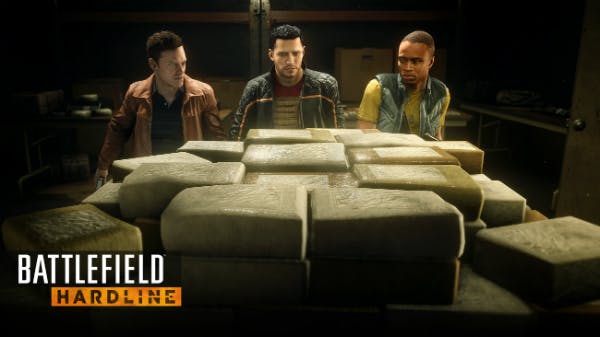 The single-player story is told in the form of an episodic cop drama. Earnest, do-gooder Miami police detective Mendoza is surrounded by crooked cops working in league with a drug cartel. Mendoza gets framed by his corrupt partners and police captain (played by Benito Martinez) and sent to prison. Mendoza breaks out and tries to prove his innocence, which requires teaming up with the criminals. It’s a plot cobbled together from any one of a number of cop movies and television shows.

Playing the campaign made me think about all the action movies I watched when I was a kid, and I wondered why those movies didn’t irritate me as much as Hardline’s campaign did. What occurred is that an action movie is a 90- to 120-minute exercise of turning off my brain and enjoying the explosions. Hardline, on the other hand, was likely going to demand six to eight hours of my time, and I couldn’t turn my brain off because I had to interact with the game.

The campaign episodes came complete with “Next on Hardline” and “Last time on Hardline” transitions, which made me want to tune out. When I’m trying a new television show, it usually has one or two episodes to hook me, otherwise I’m done. I suspended disbelief on Hardline until episode 4, when I was more than ready to cash out. I just couldn’t deal with the ridiculousness.

While trying to evacuate a criminal into police custody, our hero drives a truck into numerous sports cars driven by other criminals trying to prevent the extraction. If the player’s truck even grazes one of the criminals’ sports cars, the sports car explodes.

When Captain Dawes makes appearances at the end of episodes it’s as though he appears out of thin air, wearing the same outfit he wears in his office in the precinct. Dawes isn’t accompanied by other officers, there are no squad cars with flashing lights. Dawes is just there.

In one episode that takes place while a hurricane is ripping into Miami, Mendoza and two other officers get into a running battle in a shopping mall. When they emerge from the mall, which minutes earlier was losing its roof to the hurricane, the weather has miraculously cleared up and there stands Captain Dawes. He’s wearing his shirt and tie with no rain coat and no sign of his hair even being mussed even though he just drove through a hurricane to get to the mall. 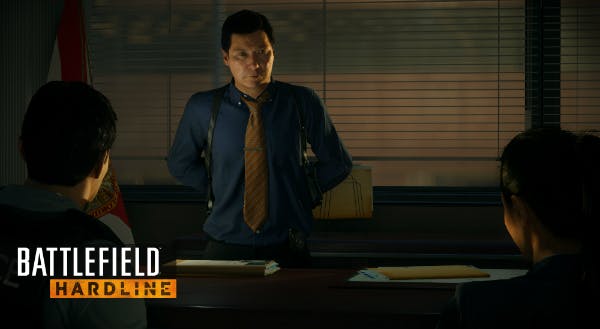 All of the “investigation” done by Detective Mendoza is conducted via a smartphone scanner. The phone rumbles, and sometimes Mendoza’s partner instructs him to check out something in the environment. The double-prompts make one wonder why these investigation scenes are even in the game, if Hardline is just going to spoon-feed them to the player.

It’s one thing if Batman uses a scanner in Arkham Asylum to find clues, because he’s a billionaire super hero. When street-level cops can’t be bothered to do any manual searching of a crime scene, opting instead for a smartphone app, it doesn’t feel right.

Mendoza inspects the environment with his smartphone to face-scan and identify criminals with warrants, to tag criminals to track their position, or to determine the location of alarm systems and power boxes. This also breaks any illusion that the player is actually in the role of a law enforcement officer, once Mendoza begins sporting what is effectively a heads-up display.

The most frustrating thing mechanically about the early episodes is that they are almost entirely a stealth game, a la Metal Gear. On the easiest difficulty mode you can go loud and shoot your way through just about anything. Otherwise, two or three hits will end you, so keeping to the shadows and out of sight as you creep through decrepit schools, grow houses, and warehouses, is the better option.

The mini-map shows guards’ cones of vision, bordered with yellow or red, depending on the guards’ level of alertness. Mendoza has an endless supply of shell casings he can toss around to distract guards with the noise. Battlefield is typically a game about roaring into war with a tank or helicopter gunship and liberally tossing around explosive devices. Creeping around under the cover of lame distractions is about as anti-Battlefield as it gets.

Criminals can be hit with a taser, which results in their convulsing and yelling out. Yet other criminals no more than 20 feet away fail to notice what’s going on. The AI for Mendoza’s partner, Khai, had her standing up and running back and forth between cover, in plain sight of guards who took no notice. And the most ridiculous thing is that players are given the option to flash their badge to freeze up to three criminals, who will then stand there and wait to be cuffed, even when there might be half a dozen other criminals on patrol in plain sight.

I get what developer Visceral Games is trying to do—marrying cop mechanics onto Battlefield gameplay in an attempt to sell the new theme—but none of it made any sense to me. Between the silly mechanics and the predictable writing the campaign felt forced and disposable. 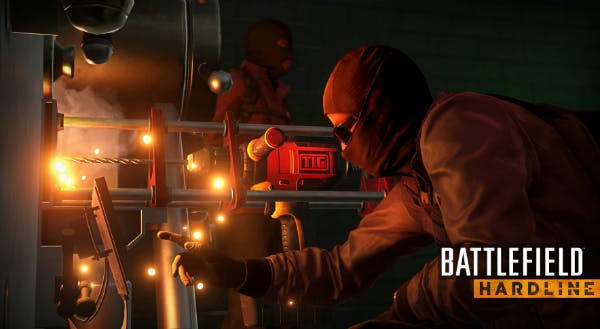 In the Heist multiplayer mode, the criminal team has to break into a vault, steal two packages, and get them to an extraction point while the law-enforcement team tries to stop them. Heist is essentially a variant of the Rush mode from Battlefield where the attackers (criminals) have a limited number of lives, and the defenders (police) have endless reinforcements.

The Hotwire multiplayer mode is an odd duck, and an interesting one. It is a variant of the standard Conquest mode that ships with all Battlefield games, where teams compete to control map locations. In Hotwire, the key elements to capture are not map locations, but vehicles. The goal is to hop into specially marked vehicles and drive them around the map, keeping them in your possession as long as possible, which is usually until someone blows the vehicle up.

Blood Money is an objective-based mode where the cops and criminals pick up money from a loot pile and then escort the money back to their team’s vault. Grabbing the loot isn’t easy, because the area around the pile is always a fusillade of gunfire and a gaggle of explosions. Either team can raid their opponent’s vault and steal money from the other team. Blood Money is extremely chaotic, in a good way.

The Rescue and Crosshair multiplayer modes do not allow respawns, which makes these the most challenging multiplayer options in Hardline. In Rescue, the criminals guard two hostages while the police try to rescue at least one of the hostages and escort them out of the building. In Crosshair, one player is a VIP that the law enforcement team is trying to get into protective custody, and the criminals are trying to kill the VIP.

Heist, Hotwire, Blood Money, Rescue, and Crosshair, all make sense in a cops-and-robbers game. The traditional Battlefield multiplayer mode Conquest does not feel like it meshed with Hardline’s theme, however. It makes sense, in other Battlefield games, for two armies to fight over contested land. To see armies of cops and criminals fighting for similar objectives, however, just feels weird and out of place. It feels like Conquest is tacked on, because Battlefield fans wouldn’t accept anything less.

Wrapped around all of this is the usual class-based Battlefield system, with Operators, Mechanics, Enforcers, and Professionals standing in for the traditional Assault, Engineer, Support, and Recon classes. Players earn cash they can use to unlock weapons. By performing well with those weapons, they can unlock attachments. Battlepacks that include weapon skins, experience boosters, and vanity items are earned by hitting benchmarks in either the campaign or multiplayer, and can also be purchased with in-game cash.

The five multiplayer modes could have been sold on their own, to inject some fresh gameplay into Battlefield. Hardline’s multiplayer is much faster paced than usual Battlefield games, and feels more like Call of Duty-speed FPS play. That’s going to please some shooter fans.

The rest of Battlefield Hardline feels like an ill-fitting concept pitch that in execution represents a hole the game’s producers dug for the development teams. I have no doubt Hardline represents the best efforts of two talented studios, Visceral and DICE, to cough up a satisfying cops-and-robbers Battlefield. Despite best efforts, the pairing doesn’t work.

Disclosure: Our Xbox One review copy of Battlefield: Hardline was provided by Electronic Arts.